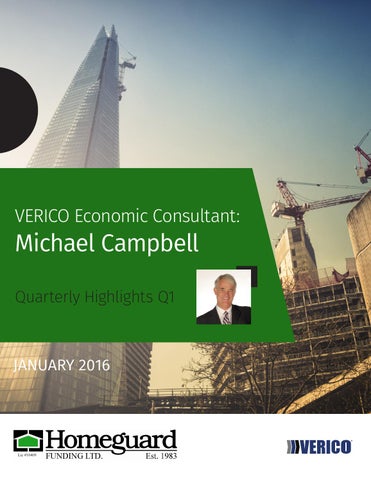 IN CHINA , $1.2 TRILLION US DOLL ARS WERE BORROWED IN 2015 TO PAY INTEREST ON E XISTING DEBT. CHINA’S TOTAL DEBT IS ESTIM ATED AT $30 TRILLION.

THE PRICE OF WESTERN C ANADA SELEC T (THE PRICE FOR OIL SANDS CRUDE) HIT A RECORD LOW BELOW $15 US PER BARREL ON JANUARY 15, 2016.

Quote of the Month “Some have talked about, ‘Did we become excessively enthusiastic or excessively exposed to energy?’ I usually resist that argument, because the market was telling us people were willing to pay up to $100 a barrel for oil. It would have been quite unusual behaviour to say, ‘No, I’m not going to take advantage of that by investing more in the oil patch.’ ” Bank of Canada Governor, Stephen Poloz

WHAT’S GOING ON: AT A GLANCE • China’s problems are back on the front burner • Oil trades under $30 • US stocks have worst start to the year in history • Canadian dollar trades at the 68 cent range – lowest in 13 years • BC is Canada’s spot

WHAT’S GOING ON I promise every central banker is looking at what’s happening in the stock, currency, commodity and interest rates markets with more than a little concern. As we get into 2016 I kept asking why anyone would think that the major economic and financial trends that dominated the last year are over? Well, they’re not. Commodity prices led by oil are still declining, Canada’s economy is in slow motion, the loonie’s going down, and China’s hasn’t solved their financial problems. Of course these moves will end at some point but there is no sign of that at this time. Certainly the macro economic drivers of these moves aren’t near over. What’s going on is pretty straightforward. Globally we are living through the great unwinding of debt that was build-up over decades and the implications are huge.

levels. The falling loonie is also a double edged sword in that it takes more money out of consumers’ pockets as the cost of imports rise. Price increases for groceries alone are estimated to cost the average family an extra $800 over the last two years. The most recent forecast have the economy growing at under 2% in 2016.

We have 5,000 year lows in interest rates including negative rates through-out Europe. We have a collapse of virtually all commodity prices, most noticeably oil. We have hundreds of billions of dollars pouring into the US sending the greenback higher against every currency in the world. And we have stock market investors moving to the sidelines because they’re scared to death of a credit induced liquidation.

What about Canada? After continually underestimating the impact of falling resource prices – especially oil, the Bank of Canada has come to realize that this is a major restructuring of the economy that it estimates can take up to 5 years and remove $50 billion a year out of the economy annually. That’s hardly a recipe for economic recovery. Neither is an aging population and an increasing tax burden at the provincial and municipal

But please understand that the economic problems are focused on Alberta, Saskatchewan and Newfoundland – the economy outside resources is still moving along. The big economic hope on the short term rests on a falling loonie that represents a de facto 40% plus pay cut for Canadians over the last 2 ½ years. Given that 75% of our exports go to the States, exporters will be thrilled with the lower dollar.

The lower end of the market is predominately influenced by immigration and interest rates as well as overall growth prospects and a strong job market for a specific jurisdiction. On that score British Columbia leads the country with projected growth in 2016 of 3.7%.

“We’re looking for a big year in tourism thanks to the low dollar.

We’re looking for a big year in tourism thanks to the low dollar. The drop in the loonie has already spurred a 21% increase in same day visit from the US in the first 10 months of 2015 while same day visits to the States by Canadians dropped 9.3%, which is good news for retail. Thanks to the currency decline Canada is on sale for Americans, Chinese and visitors from the UK, which brings me to my two question quiz.

Answer: $871,513 US ($1,248,600 Cdn) Moral of the story When it comes to foreign ownership - currencies matter. Despite the major run-up in real estate prices in Greater Vancouver in Canadian dollar terms it’s even more affordable for U.S. and Chinese buyers. Greater Vancouver is still inexpensive, let alone Victoria, Kelowna, Calgary, Edmonton and every centre in Canada – even Toronto, for buyers from the US and China.

China The big question for upper end real estate market in Vancouver and Toronto is – will foreign buying - mainly from China - slow down due to its recent financial problems? So far every major financial problem in China in the last five years has resulted in money leaving the country and that trend continues with somewhere in the neighbourhood of $900 billion leaving the country in 2015. The first destination of choice has been the States and has continued to be during the turmoil of the last month. Chinese investors have been the biggest buyers of real estate in New York for properties over $10 million including the biggest buyers of apartment buildings in Manhattan for the past two years. Last year Chinese residents also became the biggest foreign buyers of London real estate.

Also keep in mind that according Knight Frank’s Prime International Residential Index luxury apartments cost between $4,100 and $5,000 per square foot in Hong Kong but only half of that in Manhattan and Sydney ($2,100 to $2,500 per square foot). Vancouver and Toronto are significantly less expensive while providing an opportunity to send their children to school in Canada. Only a major debt implosion could derail the outflow, which in turn would put significant downward pressure on prices of upper end real estate as Chinese buyers retreat.

The lower end of the market is predominately influenced by immigration and interest rates as well as overall growth prospects and a strong job market for a specific jurisdiction. On that score British Columbia leads the country with projected growth in 2016 of 3.7% compared to a contraction of 1.2% in Alberta. In terms of in-migration from other provinces, in the third quarter of 2015, BC posted it’s best performance Vancouver and Toronto are second tier two decades as 6,300 came into the choices along with Singapore, Melbourne, in province. Obviously, increasing demand Sydney etc. for Chinese money in for housing. search of safety and diversification.

“ The big question for upper end real estate market in Vancouver and Toronto is – will foreign buying mainly from China - slow down due to its recent financial problems?

There is absolutely no pressure in terms of inflation or demand to move rates higher as the Federal Reserve did in the States in December. In fact, with oil prices, natural gas and other commodity prices continuing to fall while manufacturing exports continue to limp along, the pressure is mounting on the Bank of Canada to reduce rates.

Over the last couple of months mortgage rates in various products have edged up. This is not due to increasing yields in the bond market, (the usual reason). The increases are a reflection of the higher costs for the banks associated with the mortgage changes initiated in December by the new Liberal government.

In December, Stephen Poloz mentioned the possibility of negative rates for the first time. He added that it was a low probability but the fact that he mentioned it reflects an underlying concern about the Canadian economy’s strength. He’s already feeling the pressure to lower rates on January 20th when the next rate decision is made. Allow me to alleviate the concern. Our economy is a long way from anything approaching robust growth.

The key determinant of mortgage rates are bond yields and those yields are falling. The five and ten year treasuries are both trading at record lows– with the five year bond at .511 and the 10 year at 1.192. This is not the fuel for higher mortgage rates.

ten year treasuries are both trading at record lows... This is not the fuel for higher mortgage rates.

is a long way from anything approaching robust growth. 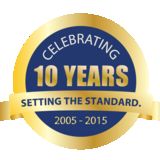