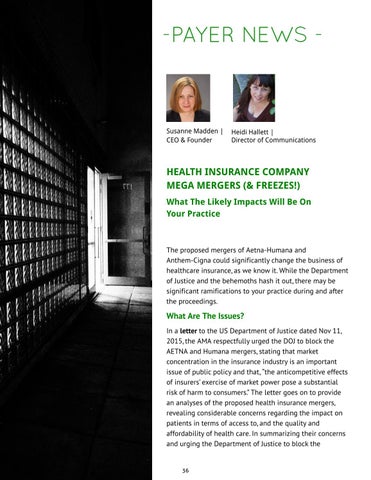 HEALTH I NSURANCE COMPANY MEGA MERGERS (&amp; FREEZES!) What The Likely I m pact s Will Be On Your Pract ice

The proposed mergers of Aetna-Humana and Anthem-Cigna could significantly change the business of healthcare insurance, as we know it. While the Department of Justice and the behemoths hash it out, there may be significant ramifications to your practice during and after the proceedings.

What Are The Issues? In a letter to the US Department of Justice dated Nov 11, 2015, the AMA respectfully urged the DOJ to block the AETNA and Humana mergers, stating that market concentration in the insurance industry is an important issue of public policy and that, ?the anticompetitive effects of insurers?exercise of market power pose a substantial risk of harm to consumers.?The letter goes on to provide an analyses of the proposed health insurance mergers, revealing considerable concerns regarding the impact on patients in terms of access to, and the quality and affordability of health care. In summarizing their concerns and urging the Department of Justice to block the