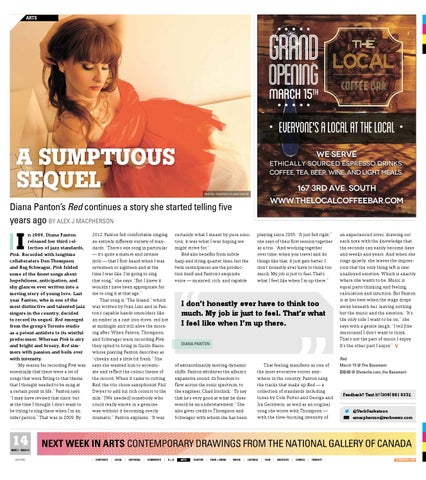 n 2009, Diana Panton released her third collection of jazz standards, Pink. Recorded with longtime collaborators Don Thompson and Reg Schwager, Pink folded some of the finest songs about hopefulness, anticipation, and shy glances ever written into a moving story of young love. Last year Panton, who is one of the most distinctive and talented jazz singers in the country, decided to record its sequel. Red emerged from the group’s Toronto studio as a potent antidote to its wistful predecessor. Whereas Pink is airy and bright and breezy, Red simmers with passion and boils over with intensity. “My reason for recording Pink was essentially that there were a lot of songs that were fitting to that theme that I thought needed to be sung at a certain point in life,” Panton says. “I may have revised that since, but at the time I thought I don’t want to be trying to sing these when I’m an older person.” That was in 2009. By

2012, Panton felt comfortable singing an entirely different variety of standards. “There’s one song in particular — it’s quite a mature and intense lyric — that I first heard when I was seventeen or eighteen and at the time I was like, I’m going to sing that song,” she says. “But I knew it wouldn’t have been appropriate for me to sing it at that age.” That song is “The Island,” which was written by Ivan Lins and in Panton’s capable hands smoulders like an ember in a cast iron stove, red hot at midnight and still alive the morning after. When Panton, Thompson, and Schwager were recording Pink, they opted to bring in Guido Basso, whose playing Panton describes as “cheeky and a little bit fresh.” She says she wanted him to accentuate and reflect the colour theme of the record. When it came to cutting Red, the trio chose saxophonist Phil Dwyer to add his rich colours to the mix. “[We needed] somebody who could really emote in a genuine way without it becoming overly dramatic,” Panton explains. “It was

certainly what I meant by pure emotion; it was what I was hoping we might strive for.” Red also benefits from subtle harp and string quartet lines, but the twin centerpieces are the production itself and Panton’s exquisite voice — nuanced, rich, and capable

playing since 2005. “It just felt right,” she says of their first session together as a trio. “And working together over time, when you travel and do things like that, it just gets better. I don’t honestly ever have to think too much. My job is just to feel. That’s what I feel like when I’m up there.”

I don’t honestly ever have to think too much. My job is just to feel. That’s what I feel like when I’m up there. diana panton

of extraordinarily moving dynamic shifts. Panton attributes the album’s expansive sound, its freedom to flow across the sonic spectrum, to the engineer, Chad Irschick: “To say that he’s very good at what he does would be an understatement.” She also gives credit to Thompson and Schwager, with whom she has been

That feeling manifests as one of the most evocative voices anywhere in the country. Panton sang the tracks that make up Red — a collection of standards including tunes by Cole Porter and George and Ira Gershwin, as well as an original song she wrote with Thompson — with the slow-burning intensity of

an experienced lover, drawing out each note with the knowledge that the seconds can easily become days and weeks and years. And when she sings quietly, she leaves the impression that the only thing left is raw, unalloyed emotion. Which is exactly where she wants to be. Music is equal parts thinking and feeling, calculation and intuition. But Panton is at her best when the stage drops away beneath her, leaving nothing but the music and the emotion. “It’s the only side I want to be on,” she says with a gentle laugh. “I tell [the musicians] I don’t want to think. That’s not the part of music I enjoy. It’s the other part I enjoy.” Red March 15 @ The Bassment $30/40 @ Showclix.com, the Bassment