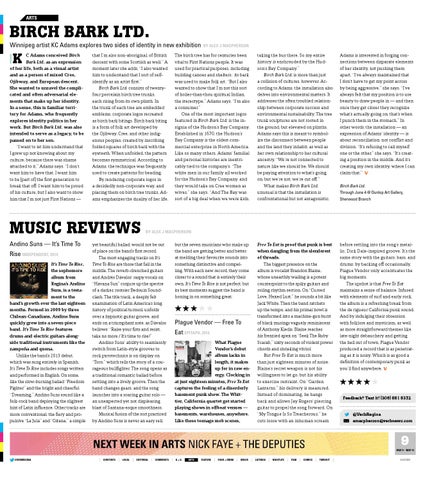 C Adams conceived Birch Bark Ltd. as an expression of her life, both as a visual artist and as a person of mixed Cree, Ojibway, and European descent. She wanted to unravel the complicated and often adversarial elements that make up her identity. In a sense, this is familiar territory for Adams, who frequently explores identity politics in her work. But Birch Bark Ltd. was also intended to serve as a legacy, to be passed on to her son. “I want to let him understand that I grew up not knowing about my culture, because there was shame attached to it,” Adams says. “I don’t want him to have that. I want him to be [part of] the first generation to break that off. I want him to be proud of his culture, but I also want to show him that I’m not just First Nations —

that I’m also non-aboriginal, of British descent with some Scottish as well.” A moment later she adds, “I also wanted him to understand that I sort of selfidentify as an artist first.” Birch Bark Ltd. consists of twentyfour porcelain birch tree trunks, each rising from its own plinth. In the trunk of each tree are embedded emblems, corporate logos recreated as birch bark bitings. Birch bark biting is a form of folk art developed by the Ojibway, Cree, and other indigenous peoples, created by inscribing folded squares of birch bark with the eyeteeth. When unfolded, the pattern becomes symmetrical. According to Adams, the technique was frequently used to create patterns for beading. By rendering corporate logos in a decidedly non-corporate way, and placing them on birch tree trunks, Adams emphasizes the duality of her life.

music reviews Andino Suns — It’s Time To Rise Independent, 2014 It’s Time To Rise, the sophomore album from Regina’s Andino Suns, is a testament to the band’s growth over the last eighteen months. Formed in 2009 by three Chilean-Canadians, Andino Suns quickly grew into a seven-piece band. It’s Time To Rise features drums and electric guitars alongside traditional instruments like the zampoña and quena. Unlike the band’s 2013 debut, which was sung entirely in Spanish, It’s Time To Rise includes songs written and performed in English. On some, like the slow-burning ballad “Freedom Fighter” and the bright and cheerful “Dreaming,” Andino Suns sound like a folk-rock band deploying the slightest hint of Latin influence. Other tracks are more conventional: the fiery and propulsive “La Jula” and “Gitana,” a simple

The birch tree has for centuries been vital to First Nations people. It was used for practical purposes, including building canoes and shelters; its bark was used to make folk art. “But I also wanted to show that I’m not this sort of holier-than-thou spiritual Indian, the stereotype,” Adams says. “I’m also a consumer.” One of the most important logos featured in Birch Bark Ltd. is the insignia of the Hudson’s Bay Company. Established in 1670, the Hudson’s Bay Company is the oldest commercial enterprise in North America. Like so many others, Adams’ familial and personal histories are inextricably tied to the company’s. “The white men in our family all worked for the Hudson’s Bay Company, and they would take on Cree women as wives,” she says. “And The Bay was sort of a big deal when we were kids,

taking the bus there. So my entire history is enshrouded by the Hudson’s Bay Company.” Birch Bark Ltd. is more than just a collision of cultures, however. According to Adams, the installation also delves into environmental matters. It addresses the often troubled relationship between corporate success and environmental sustainability. The tree trunk sculptures are not rooted in the ground, but elevated on plinths. Adams says this is meant to symbolize the disconnect between people and the land they inhabit, as well as her own relationship to her cultural ancestry. “We’re not connected to nature like we should be. We should be paying attention to what’s going on, but we’re not, we’re cut off.” What makes Birch Bark Ltd. unusual is that the installation is confrontational but not antagonistic.

Adams is interested in forging connections between disparate elements of her identity, not pushing them apart. “I’ve always maintained that I don’t have to get my point across by being aggressive,” she says. “I’ve always felt that my position is to use beauty to draw people in — and then once they get closer they recognize what’s actually going on, that’s when I punch them in the stomach.” In other words, the installation — an expression of Adams’ identity — is about reconciliation, not conflict and division. “It’s refusing to call myself one or the other,” she says. “It’s creating a position in the middle. And it’s creating my own identity, where I can claim that.” Birch Bark Ltd. Through June 4 @ Dunlop Art Gallery, Sherwood Branch

yet beautiful ballad, would not be out of place on the band’s first record. The most engaging tracks on It’s Time To Rise are those that fall in the middle. The reverb-drenched guitars and Andrés Dávalos’ raspy vocals on “Havana Sun” conjure up the spectre of a darker, rootsier Bedouin Soundclash. The title track, a deeply felt examination of Latin America’s long history of political turmoil, unfolds over a hypnotic guitar groove, and ends on a triumphant note, as Dávalos bellows: “Raise your fists and resist, take no more / It’s time to rise!” Andino Suns’ ability to seamlessly switch from Latin-style grooves to rock pyrotechnics is on display on “Toro,” which tells the story of a courageous bullfighter. The song opens as a traditional romantic ballad before settling into a lively groove. Then the band changes gears, and the song launches into a soaring guitar solo — an unexpected yet not displeasing blast of Santana-esque smoothness. Musical fusion of the sort practiced by Andino Suns is never an easy sell,

but the seven musicians who make up the band are getting better and better at melding their favourite sounds into something distinctive and compelling. With each new record, they come closer to a sound that is entirely their own. It’s Time To Rise is not perfect, but its best moments suggest the band is honing in on something great.

Plague Vendor — Free To Eat Epitaph, 2014 What Plague Vendor’s debut album lacks in length, it makes up for in raw energy. Clocking in at just eighteen minutes, Free To Eat captures the feeling of a disorderly basement punk show. The Whittier, California quartet got started playing shows in offbeat venues — basements, warehouses, anywhere. Like those teenage mob scenes,

Free To Eat is proof that punk is best when dangling from the slenderest of threads. The biggest presence on the album is vocalist Brandon Blaine, whose unearthly wailing is a potent counterpoint to the spiky guitars and roiling rhythm section. On “Cursed Love, Hexed Lust,” he sounds a bit like Jack White. Then the band ratchets up the tempo, and his primal howl is transformed into a machine-gun burst of black musings vaguely reminiscent of Anthony Kiedis. Blaine reaches his frenzied apex on “Seek The Ruby Scarab,” sixty seconds of violent power chords and shrieking vitriol. But Free To Eat is much more than just eighteen minutes of noise. Blaine’s secret weapon is not his willingness to let go, but his ability to exercise restraint. On “Garden Lanterns,” his delivery is measured. Instead of dominating, he hangs back and allows Jay Rogers’ piercing guitar to propel the song forward. On “My Tongue Is So Treacherous,” he cuts loose with an inhuman scream

before settling into the song’s metallic, Dick Dale-inspired groove. It’s the same story with the guitars, bass, and drums: by backing off occasionally, Plague Vendor only accentuates the big moments. The upshot is that Free To Eat maintains a sense of balance. Infused with elements of surf and early rock, the album is a refreshing break from the de rigueur California punk sound. And by indulging their obsession with folklore and mysticism, as well as more straightforward themes like late-night debauchery and getting the hell out of town, Plague Vendor produced a record that is as penetrating as it is noisy. Which is as good a definition of contemporary punk as you’ll find anywhere.