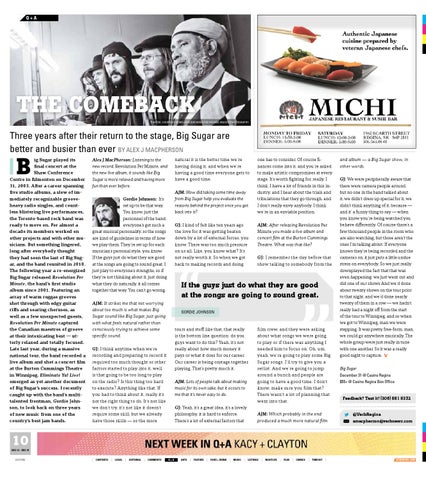 Three years after their return to the stage, Big Sugar are better and busier than ever by Alex J MacPherson

ig Sugar played its final concert at the Shaw Conference Centre in Edmonton on December 31, 2003. After a career spanning five studio albums, a slew of immediately recognizable grooveheavy radio singles, and countless blistering live performances, the Toronto-based rock band was ready to move on. For almost a decade its members worked on other projects and with other musicians. But something lingered, long after everybody thought they had seen the last of Big Sugar, and the band reunited in 2010. The following year a re-energized Big Sugar released Revolution Per Minute, the band’s first studio album since 2001. Featuring an array of warm reggae grooves shot through with edgy guitar riffs and soaring choruses, as well as a few unexpected guests, Revolution Per Minute captured the Canadian maestros of groove at their intoxicating best — utterly relaxed and totally focused. Late last year, during a massive national tour, the band recorded a live album and shot a concert film at the Burton Cummings Theatre in Winnipeg. Eliminate Ya! Live! emerged as yet another document of Big Sugar’s success. I recently caught up with the band’s multitalented frontman, Gordie Johnson, to look back on three years of new music from one of the country’s best jam bands.

Alex J MacPherson: Listening to the new record, Revolution Per Minute, and the new live album, it sounds like Big Sugar is more relaxed and having more fun than ever before.

natural it is the better time we’re having doing it, and when we’re having a good time everyone gets to have a good time. AJM: How did taking some time away from Big Sugar help you evaluate the reasons behind the project once you got back into it?

Gordie Johnson: It’s set up to be that way. You know, just the personnel of the band: everyone’s got such a great musical personality, so the songs are kind of guidelines in terms of how we play them. They’re set up for each musician’s personal style, you know. If the guys just do what they are good at the songs are going to sound great. I just play to everyone’s strengths, so if they’re not thinking about it, just doing what they do naturally, it all comes together that way. You can’t go wrong.

GJ: I kind of felt like ten years ago the love for it was getting beaten down by a lot of external forces, you know. There was too much pressure on us all. Like, you know what? It’s not really worth it. So when we got back to making records and doing

one has to consider. Of course finances come into it, and you’re asked to make artistic compromises at every stage. It’s worth fighting for, really, I think. I have a lot of friends in this industry, and I hear about the trials and tribulations that they go through, and I don’t really envy anybody. I think we’re in an enviable position. AJM: After releasing Revolution Per Minute you made a live album and concert film at the Burton Cummings Theatre. What was that like? GJ: I remember the day before that show talking to somebody from the

If the guys just do what they are good at the songs are going to sound great.

AJM: It strikes me that not worrying about too much is what makes Big Sugar sound like Big Sugar, just going with what feels natural rather than consciously trying to achieve some specific sound.

tours and stuff like that, that really is the bottom line question: do you guys want to do this? Yeah, it’s not really about how much money it pays or what it does for our career. Our career is being onstage together, playing. That’s pretty much it.

GJ: I think anytime when we’re recording and preparing to record it required too much thought or other factors started to play into it, well, is that going to be too long to play on the radio? Is this thing too hard to execute? Anything like that. If you had to think about it, really it’s not the right thing to do. It’s not like we don’t try, it’s not like it doesn’t require some skill, but we already have those skills — so the more

AJM: Lots of people talk about making music for its own sake, but it occurs to me that it’s never easy to do. GJ: Yeah, it’s a great idea, it’s a lovely philosophy, it is hard to enforce. There’s a lot of external factors that

film crew, and they were asking about what songs we were going to play or if there was anything I needed him to focus on. Oh, um, yeah, we’re going to play some Big Sugar songs. I’ll try to give you a setlist. And we’re going to jump around a bunch and people are going to have a good time. I don’t know, make sure you film that? There wasn’t a lot of planning that went into that. AJM: Which probably in the end produced a much more natural film

and album — a Big Sugar show, in other words. GJ: We were peripherally aware that there were camera people around, but no one in the band talked about it, we didn’t dress up special for it, we didn’t think anything of it, because — and it’ a funny thing to say — when you know you’re being watched you behave differently. Of course there’s a few thousand people in the room who are also watching, but those aren’t the ones I’m talking about. If everyone knows they’re being recorded and the camera’s on, it just puts a little undue stress on everybody. So we just really downplayed the fact that that was even happening; we just went out and did one of our shows And we’d done about twenty shows on the tour prior to that night, and we’d done nearly twenty of them in a row — we hadn’t really had a night off from the start of the tour to Winnipeg, and so when we got to Winnipeg, man we were stepping. It was pretty free-form, man, we could go anywhere musically. The whole group were just really in tune with one another. So it was a really good night to capture. Big Sugar December 31 @ Casino Regina $55+ @ Casino Regina Box Office Feedback? Text it! (306) 881 8372