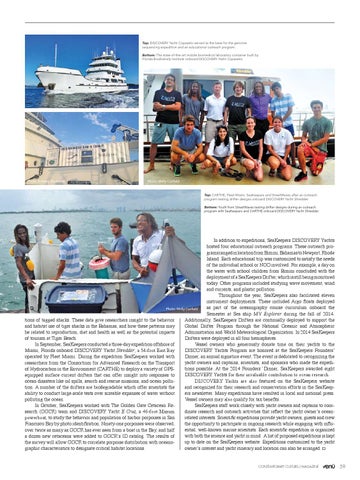 In addition to expeditions, SeaKeepers DISCOVERY Yachts hosted four educational outreach programs. These outreach programs ranged in location from Bimini, Bahamas to Newport, Rhode Island. Each educational trip was customized to satisfy the needs of the individual school or NGO involved. For example, a day on the water with school children from Bimini concluded with the deployment of a SeaKeepers Drifter, which is still being monitored today. Other programs included studying wave movement, wind and currents, and plastic pollution. Throughout the year, SeaKeepers also facilitated eleven instrument deployments. These included Argo floats deployed as part of the oceanography course curriculum onboard the Photo: Molly Canfield Semester at Sea ship MV Explorer during the fall of 2014. Additionally, SeaKeepers Drifters are continually deployed to support the tions of tagged sharks. These data give researchers insight to the behavior Global Drifter Program through the National Oceanic and Atmospheric and habitat use of tiger sharks in the Bahamas, and how these patterns may Administration and World Meteorological Organization. In 2014 SeaKeepers be related to reproduction, diet and health as well as the potential impacts Drifters were deployed in all four hemispheres. of tourism at Tiger Beach. Vessel owners who generously donate time on their yachts to the In September, SeaKeepers conducted a three-day expedition offshore of DISCOVERY Yachts Program are honored at the SeaKeepers Founders’ Miami, Florida onboard DISCOVERY Yacht Shredder, a 54-foot East Bay Dinner, an annual signature event. The event is dedicated to recognizing the operated by Fleet Miami. During the expedition SeaKeepers worked with yacht owners and captains, scientists, and sponsors who made the expediresearchers from the Consortium for Advanced Research on the Transport tions possible. At the 2014 Founders’ Dinner, SeaKeepers awarded eight of Hydrocarbon in the Environment (CARTHE) to deploy a variety of GPSDISCOVERY Yachts for their invaluable contribution to ocean research. equipped surface current drifters that can offer insight into responses to DISCOVERY Yachts are also featured on the SeaKeepers website ocean disasters like oil spills, search and rescue missions, and ocean polluand recognized for their research and conservation efforts in the SeaKeeption. A number of the drifters are biodegradable which offer scientists the ers newsletter.​ Many expeditions have resulted in local and national press. ability to conduct large-scale tests over sizeable expanses of water without Vessel owners may also qualify for tax benefits. polluting the ocean. SeaKeepers staff work closely with yacht owners and captains to coor In October, SeaKeepers worked with The Golden Gate Cetacean Redinate research and outreach activities that reflect the yacht owner’s oceansearch (GGCR) team and DISCOVERY Yacht E Cruz, a 46-foot Maxum related interests. Scientific expeditions provide yacht owners, guests and crew powerboat, to study the behavior and population of harbor porpoises in San the opportunity to participate in ongoing research while engaging with influFrancisco Bay by photo identification. Ninety-one porpoises were observed, ential, well-known marine scientists. Each scientific expedition is organized over twice as many as GGCR has ever seen from a boat in the Bay, and half with both the science and yacht in mind. A list of proposed expeditions is kept a dozen new cetaceans were added to GGCR’s ID catalog. The results of up to date on the SeaKeepers website. Expeditions customized to the yacht the survey will allow GGCR to correlate porpoise distribution with oceanoowner’s interest and yacht itinerary and location can also be arranged. graphic characteristics to designate critical habitat locations.