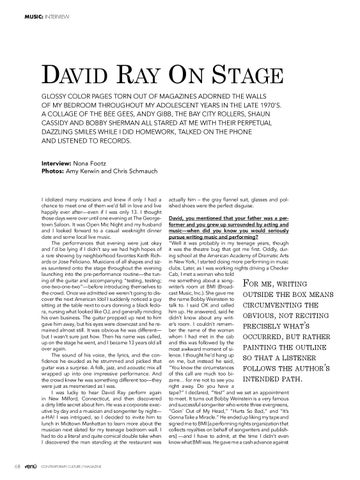 David Ray On Stage Glossy color pages torn out of magazines adorned the walls of my bedroom throughout my adolescent years in the late 1970’s. A collage of The Bee Gees, Andy Gibb, The Bay City Rollers, Shaun Cassidy and Bobby Sherman all stared at me with their perpetual dazzling smiles while I did homework, talked on the phone and listened to records. Interview: Nona Footz Photos: Amy Kerwin and Chris Schmauch

I idolized many musicians and knew if only I had a chance to meet one of them we’d fall in love and live happily ever after—even if I was only 13. I thought those days were over until one evening at The Georgetown Saloon. It was Open Mic Night and my husband and I looked forward to a casual weeknight dinner date and some local live music. The performances that evening were just okay and I’d be lying if I didn’t say we had high hopes of a rare showing by neighborhood favorites Keith Richards or Jose Feliciano. Musicians of all shapes and sizes sauntered onto the stage throughout the evening launching into the pre-performance routine—the tuning of the guitar and accompanying “testing, testing; one-two-one-two”—before introducing themselves to the crowd. Once we admitted we weren’t going to discover the next American Idol I suddenly noticed a guy sitting at the table next to ours donning a black fedora, nursing what looked like OJ, and generally minding his own business. The guitar propped up next to him gave him away, but his eyes were downcast and he remained almost still. It was obvious he was different— but I wasn’t sure just how. Then his name was called, up on the stage he went, and I became 13 years old all over again. The sound of his voice, the lyrics, and the confidence he exuded as he strummed and picked that guitar was a surprise. A folk, jazz, and acoustic mix all wrapped up into one impressive performance. And the crowd knew he was something different too—they were just as mesmerized as I was. I was lucky to hear David Ray perform again in New Milford, Connecticut, and then discovered a dirty little secret about him. He was a corporate executive by day and a musician and songwriter by night— a-HA! I was intrigued, so I decided to invite him to lunch in Midtown Manhattan to learn more about the musician next slated for my teenage bedroom wall. I had to do a literal and quite comical double take when I discovered the man standing at the restaurant was

actually him – the gray flannel suit, glasses and polished shoes were the perfect disguise. David, you mentioned that your father was a performer and you grew up surrounded by acting and music—when did you know you would seriously pursue writing music and performing? “Well it was probably in my teenage years, though it was the theatre bug that got me first. Oddly, during school at the American Academy of Dramatic Arts in New York, I started doing more performing in music clubs. Later, as I was working nights driving a Checker Cab, I met a woman who told me something about a songor me writing writer’s room at BMI (Broadcast Music, Inc.). She gave me outside the box means the name Bobby Weinstein to talk to. I said OK and called circumventing the him up. He answered, said he obvious not reciting didn’t know about any writer’s room. I couldn’t rememprecisely what s ber the name of the woman whom I had met in the cab occurred but rather and this was followed by the painting the outline most awkward moment of silence. I thought he’d hang up so that a listener on me, but instead he said, “You know the circumstances follows the author s of this call are much too biintended path zarre… for me not to see you right away. Do you have a tape?” I declared, “Yes!” and we set an appointment to meet. It turns out Bobby Weinstein is a very famous and successful songwriter who wrote three evergreens, “Goin’ Out of My Head,” “Hurts So Bad,” and “It’s Gonna Take a Miracle.” He ended up liking my tape and signed me to BMI [a performing rights organization that collects royalties on behalf of songwriters and publishers] —and I have to admit, at the time I didn’t even know what BMI was. He gave me a cash advance against