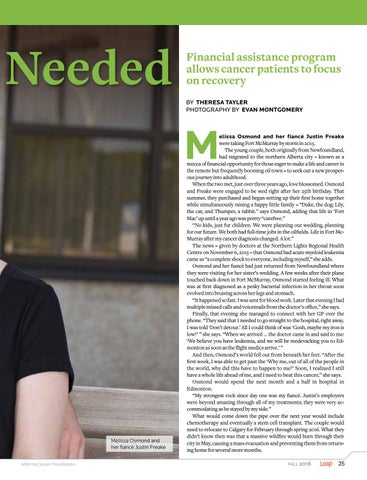 elissa Osmond and her fiancé Justin Freake were taking Fort McMurray by storm in 2015. The young couple, both originally from Newfoundland, had migrated to the northern Alberta city – known as a mecca of financial opportunity for those eager to make a life and career in the remote but frequently booming oil town – to seek out a new prosperous journey into adulthood. When the two met, just over three years ago, love blossomed. Osmond and Freake were engaged to be wed right after her 25th birthday. That summer, they purchased and began setting up their first home together while simultaneously raising a happy little family – “Duke, the dog; Lily, the cat; and Thumper, a rabbit.” says Osmond, adding that life in ‘Fort Mac’ up until a year ago was pretty “carefree.” “No kids, just fur children. We were planning our wedding, planning for our future. We both had full-time jobs in the oilfields. Life in Fort McMurray after my cancer diagnosis changed. A lot.” The news – given by doctors at the Northern Lights Regional Health Centre on November 6, 2015 – that Osmond had acute myeloid leukemia came as “a complete shock to everyone, including myself,” she adds. Osmond and her fiancé had just returned from Newfoundland where they were visiting for her sister’s wedding. A few weeks after their plane touched back down in Fort McMurray, Osmond started feeling ill. What was at first diagnosed as a pesky bacterial infection in her throat soon evolved into bruising across her legs and stomach. “It happened so fast. I was sent for blood work. Later that evening I had multiple missed calls and voicemails from the doctor’s office,” she says. Finally, that evening she managed to connect with her GP over the phone. “They said that I needed to go straight to the hospital, right away. I was told ‘Don’t detour.’ All I could think of was ‘Gosh, maybe my iron is low?’ ” she says. “When we arrived … the doctor came in and said to me: ‘We believe you have leukemia, and we will be medevacking you to Edmonton as soon as the flight medics arrive.’ ” And then, Osmond’s world fell out from beneath her feet. “After the first week, I was able to get past the ‘Why me, out of all of the people in the world, why did this have to happen to me?’ Soon, I realized I still have a whole life ahead of me, and I need to beat this cancer,” she says. Osmond would spend the next month and a half in hospital in Edmonton. “My strongest rock since day one was my fiancé. Justin’s employers were beyond amazing through all of my treatments; they were very accommodating as he stayed by my side.” What would come down the pipe over the next year would include chemotherapy and eventually a stem cell transplant. The couple would need to relocate to Calgary for February through spring 2016. What they didn’t know then was that a massive wildfire would burn through their city in May, causing a mass evacuation and preventing them from returning home for several more months. 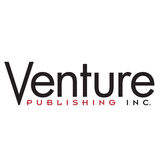 The magazine of the Alberta Cancer Foundation.

The magazine of the Alberta Cancer Foundation.