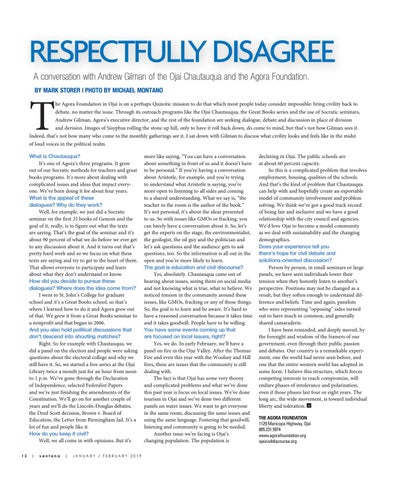 RESPECTFULLY DISAGREE A conversation with Andrew Gilman of the Ojai Chautauqua and the Agora Foundation. BY MARK STORER | PHOTO BY MICHAEL MONTANO

he Agora Foundation in Ojai is on a perhaps Quixotic mission to do that which most people today consider impossible: bring civility back to debate, no matter the issue. Through its outreach programs like the Ojai Chautauqua, the Great Books series and the use of Socratic seminars, Andrew Gilman, Agora’s executive director, and the rest of the foundation are seeking dialogue, debate and discussion in place of division and derision. Images of Sisyphus rolling the stone up hill, only to have it roll back down, do come to mind, but that’s not how Gilman sees it. Indeed, that’s not how many who come to the monthly gatherings see it. I sat down with Gilman to discuss what civility looks and feels like in the midst of loud voices in the political realm.

What is Chautauqua? It’s one of Agora’s three programs. It grew out of our Socratic methods for teachers and great books programs. It’s more about dealing with complicated issues and ideas that impact everyone. We’ve been doing it for about four years. What is the appeal of these dialogues? Why do they work? Well, for example, we just did a Socratic seminar on the first 25 books of Genesis and the goal of it, really, is to figure out what the texts are saying. That’s the goal of the seminar and it’s about 90 percent of what we do before we ever get to any discussion about it. And it turns out that’s pretty hard work and so we focus on what these texts are saying and try to get to the heart of them. That allows everyone to participate and learn about what they don’t understand or know. How did you decide to pursue these dialogues? Where does the idea come from? I went to St. John’s College for graduate school and it’s a Great Books school, so that’s where I learned how to do it and Agora grew out of that. We grew it from a Great Books seminar to a nonprofit and that began in 2006. And you also hold political discussions that don’t descend into shouting matches? Right. So for example with Chautauqua, we did a panel on the election and people were asking questions about the electoral college and why we still have it. So, we started a free series at the Ojai Library twice a month just for an hour from noon to 1 p.m. We’ve gone through the Declaration of Independence, selected Federalist Papers and we’re just finishing the amendments of the Constitution. We’ll go on for another couple of years and we’ll do the Lincoln-Douglas debates, the Dred Scott decision, Brown v. Board of Education, the Letter from Birmingham Jail. It’s a lot of fun and people like it. How do you keep it civil? Well, we all come in with opinions. But it’s 12

more like saying, “You can have a conversation about something in front of us and it doesn’t have to be personal.” If you’re having a conversation about Aristotle, for example, and you’re trying to understand what Aristotle is saying, you’re more open to listening to all sides and coming to a shared understanding. What we say is, “the teacher in the room is the author of the book.” It’s not personal, it’s about the ideas presented to us. So with issues like GMOs or fracking, you can barely have a conversation about it. So, let’s get the experts on the stage, the environmentalist, the geologist, the oil guy and the politician and let’s ask questions and the audience gets to ask questions, too. So the information is all out in the open and you’re more likely to learn. The goal is education and civil discourse? Yes, absolutely. Chautauqua came out of hearing about issues, seeing them on social media and not knowing what is true, what to believe. We noticed tension in the community around these issues, like GMOs, fracking or any of those things. So, the goal is to learn and be aware. It’s hard to have a reasoned conversation because it takes time and it takes goodwill. People have to be willing. You have some events coming up that are focused on local issues, right? Yes, we do. In early February, we’ll have a panel on fire in the Ojai Valley. After the Thomas Fire and even this year with the Woolsey and Hill fires, these are issues that the community is still dealing with. The fact is that Ojai has some very thorny and complicated problems and what we’ve done this past year is focus on local issues. We’ve done tourism in Ojai and we’ve done two different panels on water issues. We want to get everyone in the same room, discussing the same issues and using the same language. Fostering that goodwill, listening and community is going to be needed.  Another issue we’re facing is Ojai’s changing population. The population is

declining in Ojai. The public schools are at about 60 percent capacity. So this is a complicated problem that involves employment, housing, qualities of the schools. And that’s the kind of problem that Chautauqua can help with and hopefully create an exportable model of community involvement and problem solving. We think we’ve got a good track record of being fair and inclusive and we have a good relationship with the city council and agencies. We’d love Ojai to become a model community as we deal with sustainability and the changing demographics. Does your experience tell you there’s hope for civil debate and solutions-oriented discussion? Person by person, in small seminars or large panels, we have seen individuals lower their tension when they honestly listen to another’s perspective. Positions may not be changed as a result, but they soften enough to understand difference and beliefs. Time and again, panelists who were representing “opposing” sides turned out to have much in common, and generally shared camaraderie. I have been reminded, and deeply moved, by the foresight and wisdom of the framers of our government, even through their public passion and debates. Our country is a remarkable experiment, one the world had never seen before, and one that the entire western world has adopted in some form. I believe this structure, which forces competing interests to reach compromise, will endure phases of intolerance and polarization, even if those phases last four or eight years. The long arc, the wide movement, is toward individual liberty and toleration. v THE AGORA FOUNDATION 1129 Maricopa Highway, Ojai 805.231.5974 www.agorafoundation.org ojaicivildiscourse.org 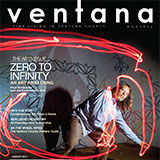