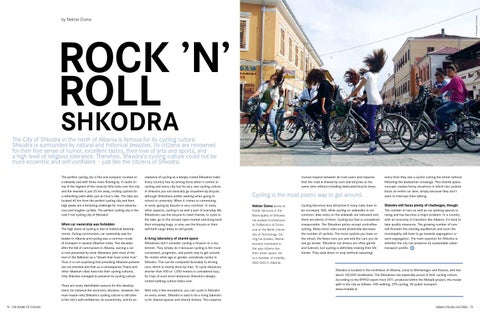 The City of shkodra in the north of Albania is famous for its cycling culture. shkodra is surrounded by natural and historical beauties. Its citizens are renowned for their fine sense of humor, excellent tastes, their love of arts and sports, and a high level of religious tolerance. Therefore, shkodra’s cycling culture could not be more eccentric and self-confident – just like the citizens of shkodra. the perfect cycling city is flat and compact, located on a lakeside and with three rivers flowing by. a castle on top of the highest of the close-by hills looks over the city and the seaside is just 25 km away, inviting cyclists for a refreshing swim after just an hour’s ride. the alps are located 60 km from the perfect cycling city and their high peaks are a tempting challenge for more adventurous and tougher cyclists. the perfect cycling city is the rock’n’roll cycling city of shkodra! When car ownership was forbidden the high share of cycling is due to historical developments. During communism, car ownership was forbidden in albania and cycling was a common mode of transport in several albanian cities. two decades after the fall of communism in albania, owning a car is now perceived by most albanians (and most of the men in the Balkans) as a “dream that must come true”. thus, it is not surprising that prevailing albanian policies are car-oriented and that as a consequence tirana and other albanian cities have lost their cycling cultures. only shkodra managed to preserve its cycling culture. there are many identifiable reasons for this development, for instance the economic situation. However, the main reason why shkodra’s cycling culture is still alive is the city’s self-confidence, its eccentricity, and its ac74 – tHe sounD of cycling

ceptance of cycling as a deeply rooted shkodran habit. every country has its driving force when it comes to cycling and every city has its very own cycling culture. in shkodra you can basically go anywhere by bicycle, although shkodrans prefer walking when going to school or university. When it comes to commuting to work, going by bicycle is very common. in many other aspects, cycling is as well a part of everyday life. shkodrans use the bicycle to meet friends, to cycle to the lake, go to the closest open market and bring back their shopping bags, or else use the bicycle or their self-built cargo bikes to sell goods. a living laboratory of shared space shkodrans don’t consider cycling a mission or a statement. they simply do it because cycling is the most convenient, pragmatic, and poetic way to get around. no matter what age or gender, everybody cycles in shkodra. this can be compared favorably to driving cars, which is mainly done by men. to cycle distances shorter than 500 or 1,000 meters is considered lazy; for trips of such short distances shkodra’s deeplyrooted walking culture takes over. With only a few exceptions, you can cycle in shkodra

on every street. shkodra is said to be a living laboratory for shared spaces and shared streets. this requires

mutual respect between all road users and requires that the road is shared by cars and bicycles at the same time without installing dedicated bicycle lanes.

Cycling is the most poetic way to get around. nektar duma works at public services in the municipality of shkodra. he studied Architecture at politecnico di Torino and at the berlin University of Technology. during his studies, nektar became interested in the way citizens live their urban space. he is a member of mobility ngo go2 in Albania.

cycling becomes less attractive if many rules have to be conveyed. still, while cycling on sidewalks is not common, bike racks on the sidewalk are tolerated and there are plenty of them. cycling too fast is considered irresponsible. the shkodran police accept contraflow cycling. Many more rules would drastically decrease the number of cyclists. the more cyclists you have on the street, the fewer cars you see and the cars you do see go slower. shkodran car drivers are often gentle and tolerant, but cycling is definitely making their life harder. they slow down or stop (without swearing)

every time they see a cyclist cutting the street without following the pedestrian crossings. this shared space concept creates funny situations in which two cyclists block an entire car lane, simply because they don’t want to interrupt their talking. Shkodra still faces plenty of challenges, though. the number of cars as well as car parking spaces is rising and has become a major problem. in a country with an economy in transition like albania, it’s hard to take quality measures. the growing number of cars will threaten the existing equilibrium and soon the municipality will have to go towards segregation or semi-segregation. the main question for shkodra is whether the city can preserve its sustainable urban transport profile.

shkodra is located in the northwest of albania, close to Montenegro and Kosovo, and has about 120,000 inhabitants. the shkodrans are especially proud of their cycling culture. according to the ByPaD report from 2011, produced within the Mobalb project, the modal split in the city as follows: 44% walking, 29% cycling, 3% public transport. www.mobalb.al 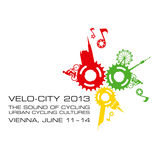