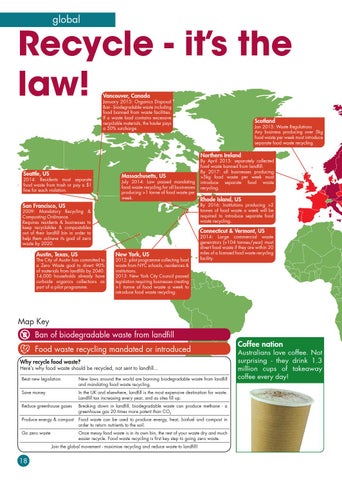 2014: Residents must separate food waste from trash or pay a $1 fine for each violation.

The City of Austin has committed to a Zero Waste goal to divert 90% of materials from landfills by 2040. 14,000 households already have curbside organics collections as part of a pilot programme.

By 2016: Institutions producing &gt;2 tonnes of food waste a week will be required to introduce separate food waste recycling.

2009: Mandatory Recycling &amp; Composting Ordinance. Requires residents &amp; businesses to keep recyclables &amp; compostables out of their landfill bin in order to help them achieve its goal of zero waste by 2020.

2014: Large commercial waste generators (&gt;104 tonnes/year) must divert food waste if they are within 20 miles of a licensed food waste recycling facility.

Hereâ&amp;#x20AC;&amp;#x2122;s why food waste should be recycled, not sent to landfill... Beat new legislation

New laws around the world are banning biodegradable waste from landfill and mandating food waste recycling.

In the UK and elsewhere, landfill is the most expensive destination for waste. Landfill tax increasing every year, and as sites fill up.

Food waste can be used to produce energy, heat, biofuel and compost in order to return nutrients to the soil.

Once messy food waste is in its own bin, the rest of your waste dry and much easier recycle. Food waste recycling is first key step to going zero waste. Join the global movement - maximise recycling and reduce waste to landfill!

The Global Issue! Going green in the middle east, the global recycling movement, the Vegware timeline and heaps more... 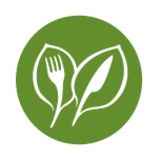