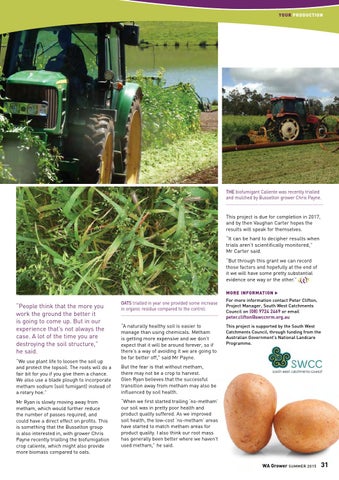 THE biofumigant Caliente was recently trialled and mulched by Busselton grower Chris Payne.

This project is due for completion in 2017, and by then Vaughan Carter hopes the results will speak for themselves. “It can be hard to decipher results when trials aren’t scientifically monitored,” Mr Carter said. “But through this grant we can record those factors and hopefully at the end of it we will have some pretty substantial evidence one way or the other.” MORE INFORMATION

“People think that the more you work the ground the better it is going to come up. But in our experience that’s not always the case. A lot of the time you are destroying the soil structure,” he said. “We use plant life to loosen the soil up and protect the topsoil. The roots will do a fair bit for you if you give them a chance. We also use a blade plough to incorporate metham sodium (soil fumigant) instead of a rotary hoe.” Mr Ryan is slowly moving away from metham, which would further reduce the number of passes required, and could have a direct effect on profits. This is something that the Busselton group is also interested in, with grower Chris Payne recently trialling the biofumigation crop caliente, which might also provide more biomass compared to oats.

OATS trialled in year one provided some increase in organic residue compared to the control.

“A naturally healthy soil is easier to manage than using chemicals. Metham is getting more expensive and we don’t expect that it will be around forever, so if there’s a way of avoiding it we are going to be far better off,” said Mr Payne.

But the fear is that without metham, there may not be a crop to harvest. Glen Ryan believes that the successful transition away from metham may also be influenced by soil health. “When we first started trailing ‘no-metham’ our soil was in pretty poor health and product quality suffered. As we improved soil health, the low-cost ‘no-metham’ areas have started to match metham areas for product quality. I also think our root mass has generally been better where we haven’t used metham,” he said. 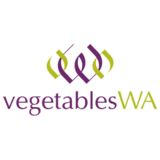