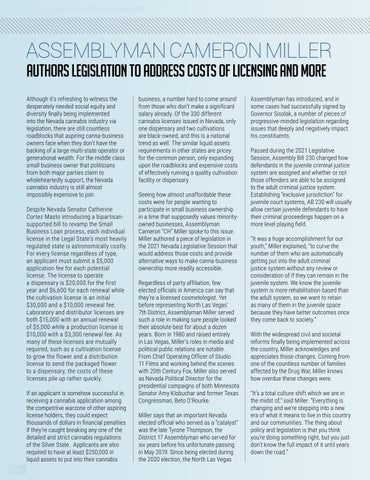 ASSEMBLYMAN CAMERON MILLER Authors Legislation to Address Costs of Licensing and More Although it’s refreshing to witness the desperately needed social equity and diversity finally being implemented into the Nevada cannabis industry via legislation, there are still countless roadblocks that aspiring canna-business owners face when they don’t have the backing of a large multi-state operator or generational wealth. For the middle class small business owner that politicians from both major parties claim to wholeheartedly support, the Nevada cannabis industry is still almost impossibly expensive to join. Despite Nevada Senator Catherine Cortez Masto introducing a bipartisansupported bill to revamp the Small Business Loan process, each individual license in the Legal State’s most heavily regulated state is astronomically costly. For every license regardless of type, an applicant must submit a $5,000 application fee for each potential license. The license to operate a dispensary is $20,000 for the first year and $6,600 for each renewal while the cultivation license is an initial $30,000 and a $10,000 renewal fee. Laboratory and distributor licenses are both $15,000 with an annual renewal of $5,000 while a production license is $10,000 with a $3,300 renewal fee. As many of these licenses are mutually required, such as a cultivation license to grow the flower and a distribution license to send the packaged flower to a dispensary, the costs of these licenses pile up rather quickly. If an applicant is somehow successful in receiving a cannabis application among the competitive warzone of other aspiring license holders, they could expect thousands of dollars in financial penalties if they’re caught breaking any one of the detailed and strict cannabis regulations of the Silver State. Applicants are also required to have at least $250,000 in liquid assets to put into their cannabis

business, a number hard to come around from those who don’t make a significant salary already. Of the 330 different cannabis licenses issued in Nevada, only one dispensary and two cultivations are black-owned, and this is a national trend as well. The similar liquid assets requirements in other states are pricey for the common person, only expanding upon the roadblocks and expensive costs of effectively running a quality cultivation facility or dispensary. Seeing how almost unaffordable these costs were for people wanting to participate in small business ownership in a time that supposedly values minorityowned businesses, Assemblyman Cameron “CH” Miller spoke to this issue. Miller authored a piece of legislation in the 2021 Nevada Legislative Session that would address those costs and provide alternative ways to make canna-business ownership more readily accessible. Regardless of party affiliation, few elected officials in America can say that they’re a licensed cosmetologist. Yet before representing North Las Vegas’ 7th District, Assemblyman Miller served such a role in making sure people looked their absolute best for about a dozen years. Born in 1980 and raised entirely in Las Vegas, Miller’s roles in media and political public relations are notable. From Chief Operating Officer of Studio 11 Films and working behind the scenes with 20th Century Fox, Miller also served as Nevada Political Director for the presidential campaigns of both Minnesota Senator Amy Klobuchar and former Texas Congressman, Beto O’Rourke. Miller says that an important Nevada elected official who served as a “catalyst” was the late Tyrone Thompson, the District 17 Assemblyman who served for six years before his unfortunate passing in May 2019. Since being elected during the 2020 election, the North Las Vegas

Assemblyman has introduced, and in some cases had successfully signed by Governor Sisolak, a number of pieces of progressive-minded legislation regarding issues that deeply and negatively impact his constituents. Passed during the 2021 Legislative Session, Assembly Bill 230 changed how defendants in the juvenile criminal justice system are assigned and whether or not those offenders are able to be assigned to the adult criminal justice system. Establishing “exclusive jurisdiction” for juvenile court systems, AB 230 will usually allow certain juvenile defendants to have their criminal proceedings happen on a more level playing field. “It was a huge accomplishment for our youth,” Miller explained, “to curve the number of them who are automatically getting put into the adult criminal justice system without any review or consideration of if they can remain in the juvenile system. We know the juvenile system is more rehabilitation-based than the adult system, so we want to retain as many of them in the juvenile space because they have better outcomes once they come back to society.” With the widespread civil and societal reforms finally being implemented across the country, Miller acknowledges and appreciates those changes. Coming from one of the countless number of families affected by the Drug War, Miller knows how overdue these changes were. “It’s a total culture shift which we are in the midst of,” said Miller. “Everything is changing and we’re stepping into a new era of what it means to live in this country and our communities. The thing about policy and legislation is that you think you’re doing something right, but you just don’t know the full impact of it until years down the road.” 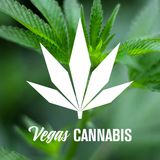