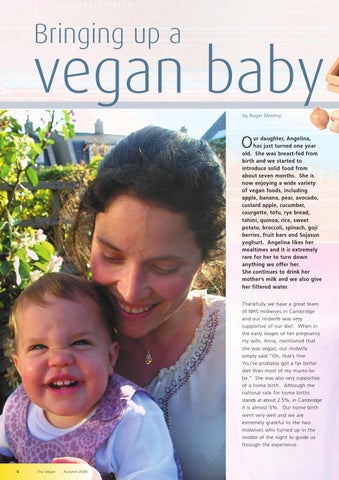 ur daughter, Angelina, has just turned one year old. She was breast-fed from birth and we started to introduce solid food from about seven months. She is now enjoying a wide variety of vegan foods, including apple, banana, pear, avocado, custard apple, cucumber, courgette, tofu, rye bread, tahini, quinoa, rice, sweet potato, broccoli, spinach, goji berries, fruit bars and Sojasun yoghurt. Angelina likes her mealtimes and it is extremely rare for her to turn down anything we offer her. She continues to drink her mother’s milk and we also give her filtered water.

Thankfully we have a great team of NHS midwives in Cambridge and our midwife was very supportive of our diet. When in the early stages of her pregnancy my wife, Anna, mentioned that she was vegan, our midwife simply said “Oh, that’s fine. You’ve probably got a far better diet than most of my mums-tobe.” She was also very supportive of a home birth. Although the national rate for home births stands at about 2.5%, in Cambridge it is almost 5%. Our home birth went very well and we are extremely grateful to the two midwives who turned up in the middle of the night to guide us through the experience.

Having looked thoroughly into the topic of inoculation and the many health and ethical issues surrounding it, we decided against vaccination. Our emphasis is on building up Angelina’s immune system through breast-feeding, avoiding refined sugar and offering her plenty of organic, or preferably veganorganic, fruits and vegetables. We also have vegan homoeopathic remedies available if required.

However our midwife’s positive attitude towards the vegan diet does not seem to be reflected in government literature. As Vegan Society member Miriam Muller has pointed out, the NHS guide Birth to Five, which is handed out free to all new parents, states that ‘children need about three servings’ of milk and dairy products a day, and goes on to tell us that ‘Vegan diets are not … recommended for young babies.’ Some non-government publications also seem to be stuck in the Dark Ages. A recent edition of the Rough Guide to Pregnancy and Birth states ‘Or you might be trying to get through pregnancy on a vegan diet (no animal products) which is just not adequate for foetal development.’ Such inaccurate and misleading comments are clearly based on prejudice rather than fact. There is a lot more to bringing up a baby than diet, of course. Quite apart from the practical demands of the job, such as near-constant supervision and the washing of numerous nappies, there is the vitally important task of making sure that babies and toddlers feel loved, valued and secure. They need reassurance, cuddles and empathy. Since her birth Angelina has always slept in our bed, which has enabled Anna to feed her without getting up in the night and we believe has given Angelina an increased sense of security. We have also used a Baby Bjorn carrier during the first year, since it feels more natural to have our baby close to us rather than sitting alone in a buggy.

FEEDING YOUR VEGAN INFANT - WITH CONFIDENCE Sandra Hood (£9.99) An essential guide for parents and health professionals on nutrition for vegan infants, Feeding your vegan infant with confidence provides reassuring guidelines on creating a well-balanced diet, from pre-conceptual nutrition for both men and women through to children’s pre-school years. The many areas covered include simple food guides, problem solving, menu ideas and recipes. Also includes vegan parents’ real life experiences in bringing up their children.

However despite the importance of all of these other aspects of childrearing we still think that diet is paramount in providing a healthy and happy start in life, and there can be little doubt that the vegan diet and its philosophy of ahimsa (seeking actively to reduce harm) are fundamental to giving a child a sense of respect for others and for him- or herself. Furthermore the general disregard displayed by most parents for animals and their lives, from factory farming to animal testing and from zoos to circuses, can soon establish the idea in a child’s mind that humans are superior and that their whims and wishes come before those of our fellow creatures. One may as well tell a child that racism, sexism and homophobia are acceptable modern-day phenomena. We believe that to be brought up with a genuine reverence for the rights of others produces a decent adult. There is much talk by government these days about responsibilities, respect and citizenship. And yet babies and children are faced with a double standard of fluffy little lambs in their story books and yet being fed that selfsame animal’s dead flesh in their high chair. It is like the government expressing horror at gun crime on our streets whilst perpetrating wars in Iraq and Afghanistan. It doesn’t add up, and to teach children such double standards is an insult to their intelligence. Fortunately as they grow up an increasing number of children, recognise the hypocrisy inherent in eating flesh and dairy and adopt a vegetarian or vegan diet. Let us hope that this trend continues and that we can look forward to a more civilized and peaceful future for the world’s offspring, both human and non-human. The Vegan Society has contacted the Department of Health about the booklet Birth to Five and they have agreed to consult us when they revise the booklet. We are contacting them regularly to remind them of their promise! The Vegan Society does not have a policy for or against vaccination.

Bringing Up a Vegan Baby 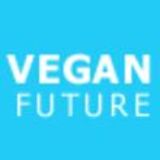