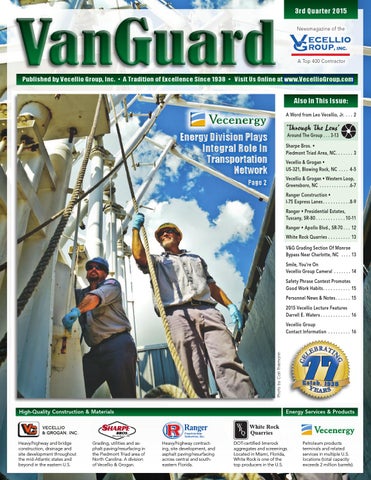 3rd Quarter 2015 Newsmagazine of the

Published by Vecellio Group, Inc. • A Tradition of Excellence Since 1938 • Visit Us Online at www.VecellioGroup.com

Grading, utilities and asphalt paving/resurfacing in the Piedmont Triad area of North Carolina. A division of Vecellio &amp; Grogan.

Energy Products &amp; Services Meet Regional Transportation Needs Transportation projects are highly visible to the public, so our Group’s heavy/highway operations tend to get the most notice. However, other aspects of the Group are just as important for meeting regional transportation needs. Our energy division, for example, owns and operA Word From ates petroleum products Leo A. Vecellio, Jr. terminals in multiple states. Vecellio Group, Inc. Chairman, CEO Now in its second decade, and President Vecenergy’s bulk gasoline, ethanol, diesel and jet fuel tanks total more than two million barrels of capacity.

The division includes two major operations in the Sunshine State: South Florida Materials Corp. and South Florida Petroleum Services, based at Port of Palm Beach and Port Everglades, respectively. In Palm Beach, we constructed a liquid asphalt terminal in 2004 to serve area road contractors, then built a diesel terminal several years later. Also last decade, we acquired infrastructure for offloading tanker ships at Port Everglades, which led to our construction of a petroleum products terminal there, as well. Other terminals, acquired in Georgia, Alabama and New Mexico in recent years, fill out Vecenergy’s portfolio of well-run facilities, overseen by Christopher Vecellio and COO/Executive V.P. Todd Cannon. As a division, our energy businesses may not be as visible to the general public as our heavy/highway construction companies, but they operate at the same high level of quality and are just as important to the transportation network. We tip our hats to the entire Vecenergy team for their commitment to operational and safety excellence. The vital products and services they provide meet transportation needs throughout their respective market areas. 2

Below Right: Traffic is shifted onto a completed section of roadway.

Above Left: A V&amp;G Crane Operator prepares to life and place bridge girders. Above Right: Carlos Farmer and Shadrach Stewart assist with calibration of new crane software in a process that uses known weights, lifted at precise angles. Left: Haraldo Valencia attaches rigging to a deck screed so a crane operator can hoist it off a completed section of bridge.

The morning sun streams through an elevated section of Western Loop highway, the shadows stretching across the surrounding wetlands. Temporary work platforms provide construction crews with the necessary access, minimizing impact to the environmentally sensitive area.

Above: The Western Loop project involves a full package of excavation, drainage and grading, in addition to extensive bridge work. Far Right: Eudoxio Medrano helps position a column of rebar as it is being lowered.

Like an orchestra conductor, Ranger’s Zaheer Williams directs the activity of haul trucks and heavy equipment during construction of a new ramp at Sheridan Street on Ranger’s I-75 design-build project, Segment D. 8

Top: Hoe Operator Junior Ramsey removes unsuitable material from the median of Segment C. Layers of millings and rock will then be placed and compacted to form a stable embankment, upon which express lanes will be built. Above: Loader Operator Dominique Simon works alongside sound wall installation on Segment D. Above Right: Working amid the wet conditions, Dozer Operator Willie Jones spreads millings on a section of Segment C. Right: Loader Operator Jose Perez works near a retention pond in Segment D. Below: Sharon Major collects dump truck tickets on a section of Segment C.

Above Right: Hernando Correa and Dave Hilderman check the grade during road construction. Above, Far Right: A box culvert seems to look on in wide-eyed amazement at all the progress being made. Right: Pipe work on the project is being handled by subcontractor Centerline. The community is being built by GL Homes.

Left: Loader Operator Nick Rosier moves material on Ranger’s Apollo Blvd. construction project in Melbourne, FL. Top: Ricky Angel and an electrical subcontractor pull wiring out of the roadway during traffic signal replacement, while police have all traffic stopped. Above: Mechanic Steve Lumadue gets air tools to work on a skid steer.

Through The Lens Above: Quickly refilling the highcapacity bucket with FDOT-certified aggregates, Loader Operator Osmani Piedra is ready for the next customer’s truck. Two bucketfuls from the Cat 988G loader is all it takes to fill a dump truck. Photos by Carl Thiemann

Left: Mechanic Todd Voytek and Joey Rabassa look over a 150-ton Cat 785B off-road haul truck, in the shop for maintenance. Right: Vincente Parra is one of White Rock’s talented welders.

Vecellio &amp; Grogan Grading 10-Mile Section Of Monroe Bypass Near Charlotte, NC Vecellio &amp; Grogan has been awarded a $25.3 million grading and drainage subcontract on a section of the Monroe Expressway, a 20-mile bypass being built roughly parallel to US-74 southeast of Charlotte, NC. V&amp;G is working on the middle of three sections, approximately 10 miles of four-lane, divided highway, involving

2.4 million cu. yds. of earthwork. V&amp;G is working for Monroe Bypass Constructors on the design-build contract, with Rummel Klepper &amp; Kahl (RK&amp;K) handling the engineering. Due to open in 2018, the Expressway begins near I-485 in Mecklenburg County and reconnects to US-74 farther to the southeast in Union County. It will provide

a higher speed alternative for regional traffic, relieving congestion on the locally well-traveled, commercial stretch of state road. Also known as the Monroe Bypass or Monroe Connector, the Expressway will be operated by the North Carolina Turnpike Authority, with flat rate tolls instead of variable tolling.

Jack Smith of V&amp;G, on a US-321 widening project in Blowing Rock, NC.

Vecellio &amp; Grogan’s Eddie Hicks talks with Amber McNeilly and a temporary worker on a US-321 widening project in Blowing Rock, NC.

IN MEMORIAM White Rock Quarries 1st Half 2015 • Tracy Davis (with Tony Diaz, left): “Be Smart, Use Safety From The Start.”

Dallas Durst, a former Vecellio &amp; Grogan Equipment Operator and Supervisor who retired in 1978 after a spinal cord injury left him significantly disabled, passed away recently. Determined to remain productive in his personal life and stay positive despite his injury, Dallas continued to be part of the company family, attending holiday gatherings as a guest of the Vecellios for decades afterward.

Road Crew Assists Woman, Child After Car Enters Pond When a car accident sent a vehicle into a pond, members of a Ranger Construction road crew, who happened to be working nearby, rushed over to provide assistance. Jose Chavez and Eliu Vasquez, part of a drainage crew on Ranger’s Apollo Boulevard project in Melbourne, FL, helped the driver and her five-yearold daughter get out of the vehicle as it Providing assistance were crew members began to submerge. The car continued (L to R): Jose Chavez, Eliu Vasquez, Obed sinking until the nose touched bottom, Vasquez, Jorge Barragan and Isidro Torres. with just the trunk protruding above water. Other Ranger crew members assisted from the shore. “They did a great job! They helped prevent a tragedy with their quick thinking and fast response,” said Lisa Castronova, a Ranger Project Manager.

Vecellio &amp; Grogan Landon Davis: “You Are The Key... To Your Safety!“

The Lecture is sponsored Darrell Waters, a Senior by the Vecellio Family FounVice President of Fluor Enterdation and individual family prises, knows a thing or two about collaboration. He is Projmembers through an endowect Executive and President of ment to the school’s Vecellio Construction Engineering Tappan Zee Constructors, the and Management Program. design-build team replacing The endowment also supports the structurally deficient Tap- Darrell E. Waters pan Zee Bridge in New York scholarships, fellowships and in the largest single public infrastructure a full professorship at the school. project underway in the country. Several Vecellio family members are Waters discusses the “how-to’s” of collaboration at this year’s Vecellio Distinguished Lecture, held each fall at Virginia Tech, alma mater of several Vecellio family members.

Past Presenters of the Vecellio Distinguished Lecture: 2009 – Paul E. Torgersen

Architect of the Capitol, US Gov.

Published by Vecellio Group, Inc., one of the nation’s top 400 contractors. Scan QR code to see www.VecellioGroup.com and our online VanGuard.

The Vecellio Group’s print and online communications are the recipients of numerous awards and recognitions. 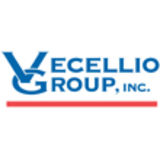