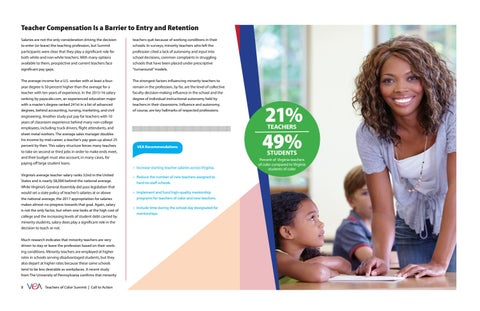 Teacher Compensation Is a Barrier to Entry and Retention Salaries are not the only consideration driving the decision to enter (or leave) the teaching profession, but Summit participants were clear that they play a significant role for both white and non-white teachers. With many options available to them, prospective and current teachers face significant pay gaps.

teachers quit because of working conditions in their schools. In surveys, minority teachers who left the profession cited a lack of autonomy and input into school decisions, common complaints in struggling schools that have been placed under prescriptive “turnaround” models.

The average income for a U.S. worker with at least a fouryear degree is 50 percent higher than the average for a teacher with ten years of experience. In the 2015-16 salary ranking by payscale.com, an experienced education major with a master’s degree ranked 241st in a list of advanced degrees, behind accounting, nursing, marketing, and civil engineering. Another study put pay for teachers with 10 years of classroom experience behind many non-college employees, including truck drivers, flight attendants, and sheet metal workers. The average sales manager doubles his income by mid-career; a teacher’s pay goes up about 25 percent by then. This salary structure forces many teachers to take on second or third jobs in order to make ends meet, and their budget must also account, in many cases, for paying off large student loans.

The strongest factors influencing minority teachers to remain in the profession, by far, are the level of collective faculty decision-making influence in the school and the degree of individual instructional autonomy held by teachers in their classrooms. Influence and autonomy, of course, are key hallmarks of respected professions.

Virginia’s average teacher salary ranks 32nd in the United States and is nearly $8,000 behind the national average. While Virginia’s General Assembly did pass legislation that would set a state policy of teacher’s salaries at or above the national average, the 2017 appropriation for salaries makes almost no progress towards that goal. Again, salary is not the only factor, but when one looks at the high cost of college and the increasing levels of student debt carried by minority students, salary does play a significant role in the decision to teach or not.

• Reduce the number of new teachers assigned to hard-to-staff schools.

Much research indicates that minority teachers are very driven to stay or leave the profession based on their working conditions. Minority teachers are employed at higher rates in schools serving disadvantaged students, but they also depart at higher rates because these same schools tend to be less desirable as workplaces. A recent study from The University of Pennsylvania confirms that minority 8

• Implement and fund high-quality mentorship programs for teachers of color and new teachers. • Include time during the school day designated for mentorships.