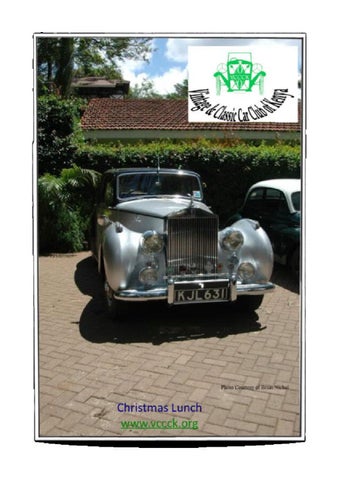 Chairman's Message: We are having problems getng the Magazine out regularly and this is not so much as a result of James being in the UK but more of us all being in full tme employment or running their own businesses and therefore fnding very litle tme. I assure you that your Commitee is very much concerned about this and is doing everything possible to see what can be done to ensure regularity. Anyone out there willing to lend a hand should please get in touch. We have had very good response to our Outngs and the Chairmanâ&#x20AC;&#x2122;s Treasure Hunt; Lukenya and The Christmas Lunch were all huge successes. I am under increasing pressure from my Events Team about setng a limit to the number of people atending so that we can run the Outngs more efciently. This means we are either going to have to turn away people reserving places afer the maximum has been reached or limit the number of Guests that Members can bring along. It is unfortunate but something that has to be done. Both Mike Tilley and Rick Agagliate have resigned from the Commitee and I wish to thank them both for everything they have done in helping me run the Club. Mike had the Membership Secretary portolio, which he ran very efciently and Rick was in charge of the Club Merchandise. In the absence of Mike, I therefore feel it my duty to remind you all to pay your 2011 subscriptons as the AGM is coming up on 18th March 2011. I look forward to seeing you all there. Keep the pistons moving,

Monte Monte chairman@vccck.org Please be aware that the contents of this magazine refect the opinions and experiences of members of the Vintage and Classic Car Club of Kenya and are not to be used as legal advice. Whilst we atempt to ensure the enclosed informaton is as reliable as possible all maters relatng to motoring law, or any other legal / ofcial maters should be pursued with the relevant legal authorites. We cannot accept any liability for loss or damage based on of the following advice as it is given in good faith only.

Editor's Message: Welcome to the frst magazine of 2011, 2010 wasnâ&#x20AC;&#x2122;t a very successful year for getng the magazine out on tme and I take full responsibility for this. Despite promises of fnding tme it has consistently been difcult to put it together but now we are in 2011 and hoping for a beter year. If you do have images of your vehicles or stories please do send them and I ensure they put together and entered into the next magazine. Equally, should anyone want to assist in writng the magazine please email myself or Monte and I am more than happy to share the task. This month we have some great images of the Christmas Lunch thanks to Brian Nichol, an artcle by Colin Sayer about his fathers involvement in the Royal Safari for the Prince of Wales and a Telegraph artcle on Classic Cars in 2010. On a personal note my Kenyan Citroen DS is fnally UK registered and ready to go on the road, KNE 986 is now HGU 543J and is getng a few looks following its restoraton by Monte. Happy motoring! James Dyson - Magazine and Website Editor, editor@vccck.org

Forth Coming Events: Upcoming club events for 2010 Include: 

Details for all of these events will be sent via email near the dates but please keep the dates free. EVENTS CO-ORDINATOR – PAVI PANESAR Email: pavi@vccck.org Mobile: 0728 600 541

A Royal Safari: A book is to be published soon describing fully the part played by 7 twentyone sixty horsepower Wolseley Messenger cars in a Safari undertaken by the Prince of Wales in 1930 in East Africa. They covered 30,000 car miles â&#x20AC;&#x201C; and needed two fan belts replacing, by way of maintenance â&#x20AC;Ś.. My father was responsible for the transport for the safari, being then employed by Wolseley Motors. The book includes a 59 page report by my father on the behaviour of the cars and the Safari itself, many of the photographs that he took and many of the documents from 1929 and 1930 relatng to the organisaton of the whole afair from start to fnish. C.G.Sayer

The Fleet Assembled in Nairobi

They drove through the bush, below in sight of Mt. Kilimanjaro

â&#x20AC;&#x153;I had been fretting a good deal because I could not get into touch with any person with the necessary knowledge and authority to tell me aught of the job ahead, and it was not until a few days of the start that the Hon. Denys Finch-Hatton, the White Hunter in charge of the arrangements for the Safari turned up in Nairobi. I learnt that the Safari was to be divided into three phases. For the first two our cars would operate very largely through the trackless bush some 200 miles to the South of Nairobi.â&#x20AC;?

CONCOURS TELEVISION PROGRAMME PREMIERE AND OFFICIAL LAUNCH OF THE REGULATIONS TUESDAY FEBRUARY 22nd, IN THE NAIROBI CLUB DINING ROOM AT 6.30 P.M. The Alfa Romeo Owners Club Commitee and the AccessKenya Africa Concours d’Elegance organisers are looking forward to welcoming you in the Nairobi Club dining room for the Concours d’Elegance Television Programme premiere and the ofcial launch of the Regulatons. This is a popular event on the social calendar and it is antcipated that press photographers will be present. The suggested dress code for Concours compettors is jacket and te, but ‘smart casual’ will not be out of place. There will be a draw for three cash prizes to reward lucky compettors who have submited entries for the 2011 Concours before the showing of the TV Programme. Kris Senanu, the Managing Director of the Internet Division of AccessKenya will be the guest of honour and will deliver a short keynote speech. This will be followed by a brief explanaton of the few changes which have been made in the Regulatons and comments from Maina Muturi, the Vice President of FIM. AFRICA. The highlight of the evening will be the frst viewing of the TV Programme covering the 2010 Concours. This was flmed by the talented Flashback team using eight cameras and edited with hi-tech equipment. The programme will be submited to DSTV for consideraton for televising on Super Sport.

A FLYING START The 2011 AccessKenya Africa Concours d’Elegance made a fying start with the submission of the frst car entry by Arusha based Tor Allan and the frst motorcycle entry came from Milton Aineruhanga (pictured), the Chairman of the Uganda Bikers Associaton. Tor Allan will be driving his 1966 Peugeot 404 (pictured) along the judging line on September 25th and Milton will be showing a 2002 BMW R1150GS in the motorcycle enclosure. This has been a great morale booster for the volunteers in the Concours d’Elegance ofce and it is hoped that there will be a steady fow of entries in tme for the lucky draw to be held in conjuncton with the TV Programme premiere in the dining room of the Nairobi Club on February 22nd. The Regulatons are enclosed with this bulletn and it would be appreciated if you would submit your completed entry form together with payment either by post, or by delivery to the Concours d’Elegance ofce in the Bob Dewar Publicity premises on the second foor of Block G, Norfolk Towers, Kijabe Street. The e-mail address is info@bobpr.com and the telephone numbers are 2229793, or 316160. The ofce is open from 7.30 a.m. to 5.00 p.m. on weekdays. The opportunity is taken to wish you a happy, peaceful and prosperous 2011. Best regards, JANE NJOROGE

VCCCK Christmas Lunch Thanks to Brian Nichol for the photos

We had a fantastc turn out of both members and guests 68 in total and 10 Vintage and classic cars. We had the usual traditonal Christmas Lunch on the 12th December at Karen Country Lodge. The Club subsidized the drinks.

Below are some pictures of the members and their cars.

Jasper Gerard In a spirit of eternal optmism, I'll start with the good. Antques are hurled on bonfres (dealers admit privately they can scarcely give away "brown furniture", by which they mean anything obviously wooden and old). And talking of Moira Stuart, she lost her job on television for the grievous crime of being caught in possession of too many birthdays. Yet some pensioners have been appreciated this year: old cars. It's been a revelaton to witness record crowds at shows with even nippers delightng in old smokers. King of these beanos remains Goodwood, where the Revival â&#x20AC;&#x201C; revving with folk in

period clobber â&#x20AC;&#x201C; attracted 134,000 visitors; the Festval of Speed hillclimb managed 176,000. And every year another fantastc show blasts on to the classic calendar. This year's debutant was the stunning Chelsea

Auto Legends event. Or, competng in the London to Brighton Veteran Car Run, I was staggered by all the enthusiasts cheering at every village. And many petroleum junkies realised their ambiton of buying a classic car; as the recessionary bear began to snarl, some owners fnally listened to realistc ofers. If you don't own a classic yet and Santa doesn't do the business, make it your new year resoluton to buy one. Well, if dear old Moira can enjoy a comeback, why not some old tn? Yet if classics live in perpetual fear of the crusher, inevitably owners end up at that great scrapyard in the sky. Stll, like fying aces, the obituaries of motor enthusiasts make rivetng reading. I stll recall tributes to Lord Deramore, who won the Paris to Nice trial and who, well into his dotage, would blast home from the House of Lords at 130mph. At 85 he wrote an erotc novel. Alas there are fewer characters lef to bury now, but Chuck Jordan was a notable loss this year. The General Motors design supremo bestowed upon ffies cars their fnned good looks, which defned the period as powerfully as Elvis's quif. Notable creatons included the Buick Riviera (1963) and Cadillac Eldorado (1967), which he likened to letng a "tger out of the cage". Later, the animal analogies were turned on him and he was branded a dinosaur. He dared to deplore focus groups and accountants taking over car design: "A good car designer," he said, "doesn't need Mr and Mrs Zilch from Kansas telling him what to do." Other notable losses were Ralph Broad, pioneer racer of Minis who won his class and smashed records at Silverstone before founding Broadspeed, the infuental tuning company. And Bernard Friese, a German POW who went on to make the only Welsh sports car, the Gilbern, whose devotees included the Prince of Wales and Anthony Hopkins. Ah, he was a lively old goat, enjoying a full life in Thailand into his eightes. The motoring spirit stll throbs...

Reference the Mercedes 170. The registration number is Kenyan and for a car registered in Nairobi. As far as I can remember Kenyan registrations started with single letters and went up to four numbers. After that Kenya started with three letters starting in 1950, the first letter being K obviously for Kenya. The second letter denoted the town where the car was registered: A for Mombasa and B for Nairobi, C for Nakuru, D for Kisumu, E for Nanyuki and the third letter was the date during the series that was issued. This was followed by three numbers. Therefore KAA 001 was the first car registered in Mombasa when the new system was introduced and the series ran up to KAA 999. Using this information the Mercedes was KBV. As I have already said registered in Nairobi in between May 1954 and before September 1954 when KBW was started according to my research. Brian Nichol The first VCCCK Magazine of 2011

The first VCCCK Magazine of 2011