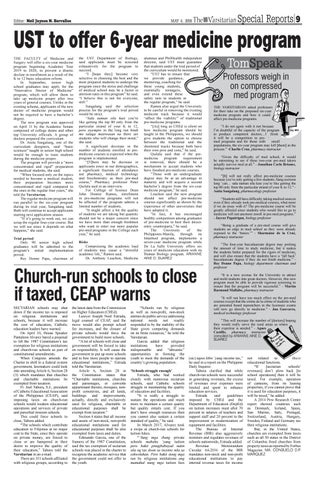 UST to offer 6-year medicine program THE FACULTY of Medicine and Surgery will offer a six-year medicine program beginning Academic Year 2019 to 2020, to prevent a drastic decline in enrollment as a result of the K to 12 basic education reform. In September, senior high school graduates may apply for the “Innovative Doctor of Medicine” program, which will allow them to take up medicine proper after two years of general courses. Unlike in the existing scheme, applicants of the new doctor of medicine program would not be required to have a bachelor’s degree. The new program was approved on April 11 by the Academic Senate composed of college deans and other top University officials. A group of doctors prepared the curriculum. Dr. Anita Sangalang, one of the curriculum designers, said “basic sciences” taught in senior high school would be enough to train students during the medicine proper. The program will provide a “more concentrated and rigid” preparation for medical students, she said. “When focused only on the topics needed to become a medical student, their preparation becomes more concentrated and rigid compared to the ones in the regular four years,” she told the Varsitarian. The regular medicine program will run parallel to the six-year program during its trial year, Sangalang said. Both will continue to accept applicants starting next application season. “If it’s going to work out, we can scrap the regular four-year course. But we will see since it depends on what happens,” she said. Trial period Only 90 senior high school graduates will be admitted to the program’s initial implementation period. Rey Donne Papa, chairman of

the UST Department of Biology, said applicants must be screened exhaustively for the program to succeed. “I [hope they] become very selective in choosing the best and the most prepared students to undergo the program since the stress and challenge of medical school may be a factor in attrition rates in this program” he said. “I believe this is not for everyone, still.” Sangalang said the selection process for the program’s trial period would be strict. “Sala naman sila kasi you’re like getting the top 80 only from the particular strand of your K to 12, pero siyempre in the long run hindi mo talaga maiiwasan na there are students who will change their mind,” she said. A significant decrease in the number of students enrolled in premedicine courses is expected when the program is implemented. “[T]here may be decrease in applicants since in our demographics, a significant fraction of attendance use pharmacy, medical technology and biochemistry as their pre-med course,” Pharmacy professor Peter Quilala said in an interview. For College of Science Dean John Donnie Ramos, enrollment in pre-medicine programs will not be affected if the program admits a limited number of students. “It might affect a bit the quality of students we are taking but quantity should not be a major concern since we have more than enough freshmen who want to enter our more popular pre-med programs in the College each year,” he said. Risks Compressing the academic load of students may cause a “stressful academic life,” Ramos said. Dr. Anthony Leachon, Medicine

alumnus and PhilHealth independent director, said UST must guarantee that students under the trial period of the curriculum would be monitored. “UST has to ensure that we provide guidance, mentoring, coaching for these young students, essentially teenagers, and even extend these safety nets to students in the regular program,” he said. Ramos also urged the University to be careful in removing the existing medicine track because it would “affect the viability” of traditional pre-medicine programs. “[As] long as CHEd is silent on how medicine program should be taught in the Philippines, we should give students the option to choose between the traditional and the shortened tracks because both have their own pros and cons,” he said. Quilala said that if the premedicine program requirement is removed, there should be a mechanism to accept students who have finished pre-medicine courses. “Those with an undergraduate degree may be at an advantage in maturity and will acquire a second bachelor’s degree from the six-year medicine program,” he said. Leachon said the new program should not affect pre-medicine courses significantly as shown by the experience of other universities that have adopted it. “In fact, it has encouraged healthy competition among graduates of pre-medicine to best their directentry counterparts,” he said. The University of the Philippines-Manila, through its Intarmed program, implements a seven-year medicine program while De La Salle University offers six years of medicine education with its Human Biology program. ARIANNE AINE D. SUAREZ

Church-run schools to close if taxed, CEAP warns SECTARIAN schools may shut down if the income tax is imposed on religious institutions and schools, because it will increase the cost of education, Catholic education leaders have warned. On April 10, House Speaker Pantaleon Alvarez bared a proposal to lift the 1987 Constitution’s tax exemption for religious institutions and church-run schools as part of constitutional amendments. When Congress amends the Charter to shift to a federal system government, lawmakers could look into amending Article 6, Section 28 (3) which mandates that churches and charitable institutions be exempted from taxation. Fr. Joel Tabora, S.J., president of Catholic Educational Association of the Philippines (CEAP), said imposing taxes on church-run schools would weaken educational operations and services of private and parochial mission schools. This could force schools to close, Tabora added. “The schools which contribute education to Filipinos at no major cost to the State, since they operate on private money, are forced to close or are hampered in their desire to improve the quality of their education,” Tabora told the Varsitarian in an e-mail. There are 351 schools affiliated with religious groups, according to

the latest data from the Commission on Higher Education (CHEd). Lawyer Joseph Noel Estrada, legal counsel of CEAP, said the move would also prompt school fee increases, and the closure of private schools would force the government to build more schools. “A lot of schools will close and government will be forced to take on responsibility. It will cause the government to put up more schools and to hire more people to operate educational institutions,” Estrada told the Varsitarian. Article 6, Section 28 in the Constitution states that “Charitable institutions, churches and parsonages, or convents appurtenant thereto, mosques, nonprofit cemeteries, and all lands, buildings and improvements, actually, directly and exclusively used for religious, charitable or educational purposes shall be exempt from taxation.” Section 4 states that all income and assets of non-stock, non-profit educational institutions used for educational purposes shall be also exempted from taxes and duties. Edmundo Garcia, one of the framers of the 1987 Constitution, said the tax exemption of sectarian schools was placed in the charter to recognize the academic service that the government could not offer to the youth.

“Schools run by religious as well as non-profit, non-stock entities do public service addressing national needs not readily responded to by the inability of the State given competing demands on its finite resources,” he told the Varsitarian. Garcia added that religious institutions have provided indispensable and “altruistic” opportunities in forming the youth to meet the demands of the country’s growing population. ‘Schools struggle enough’ Estrada, who had worked closely with numerous sectarian schools, said Catholic schools struggle in maintaining the quality of education and facilities. “It is really a struggle to sustain the operations and much more to maintain a certain quality but quality entails cost. If you don’t have enough resources then you cannot also sustain a certain standard of quality,” he said. In March 2017, Alvarez took a swipe at church-run schools for tuition hikes. “&#96;Yung mga ibang private schools mababa &#96;yung tuition pero bakit pinagbabayad natin sila ng tax doon sa income nila sa eskwelahan. Pero bakit itong mga run by religious institutions ang mamahal nung mga tuition fees

TomSpeak Professors weigh in on compressed med program THE VARSITARIAN asked professors for their take on the proposed six-year medicine program and how it could affect pre-medicine programs. “I do not agree with it not because I’m doubtful of the capacity of the program to produce competent doctors…I think it will be a competition to premed programs and for those with small populations, the six-year program may kill [them] in the process.” -Charlie Cruz, pharmacy instructor “Given the difficulty of med school, it would be interesting to see if these two-year pre-med takers actually survive med at all.” - Jonathan Carlo Briones, biology instructor “[It] will not really affect pre-medicine courses because you’re only getting a few students. Ilang sections lang &#96;yan… sala naman sila kasi you’re like getting the top 80 only from the particular strand of your K to 12.” Anita Sangalang, pharmacology professor “Students still have difficulty taking medical sources even if they already took pre-medical courses, what more if we do away with it? The pre-medicine course will be greatly affected since students who would like to go to medicine will not anymore enroll in pre-med programs.” - Jaycee Paguirigan, biology professor “Being a graduate of a pre-med course will give students an edge in med school as they were already exposed to the ‘basics.’” - Sharmaine de la Cruz, pharmacy instructor “The four-year baccalaureate degree may prolong the amount of time to study medicine, but it makes the students better prepared for the rigors of medicine, and will also ensure that the students have a ‘fall back’ baccalaureate degree if they do not finish medicine.” Rey Donne Papa, biology department chairman and professor “It is a new avenue for the University to attract and mold students into great doctors. However, this new program must be able to provide rigorous screening to ensure that the program will be successful.” - Martin Raemond Mallabo, pharmacy instructor “It will not have too much effect on the pre-med courses except that the crème de la crème of students who are potential board topnotchers in the licensure exams will now go directly to medicine.” - Jun Guevarra, medical technology professor “This will increase the number of [doctors] hoping they would really serve the rural areas as where their expertise is needed.” - Agnes Castillo, pharmacy instructor compiled by ARIANNE AINE D. SUAREZ

(sic) tapos libre &#96;yung income tax,” he said in a report on the Philippine Daily Inquirer. Tabora clarified that while church-run schools were successful in generating revenues, the excess of revenues over expenses were limited and spent to enhance education services. Estrada said guidelines imposed by CHEd and the Department of Education (DepEd) on tuition increases must allot 70 percent to salaries of teachers and support staff and 20 percent to the improvement or modernization of equipment and facilities. The Bureau of Internal Revenue (BIR) also aggressively monitors and regulates revenues of schools nationwide, Estrada added. Revenue Memorandum Circular 64-2016 of the BIR mandates non-stock and non-profit educational institutions to pay internal revenue taxes for income

not related to their educational functions. “If [sectarian schools’ revenues] don’t plow back [to school operations] then it will be taxed. For example, operation of canteens, from its leasing properties, if you cannot prove that it is used for education purposes, it will be taxed,” he added. A 2014 Pew Research Center report showed countries such as Denmark, Iceland, Spain, San Marino, Italy, Portugal, Switzerland, Austria, Hungary, Sweden, Finland and Germany tax their religious institutions. But, in the United States, churches are exempted from taxes such as all 50 states in the District of Columbia freed churches from property taxes as reported by Forbes Magazine. MA. CONSUELO D.P. MARQUEZ 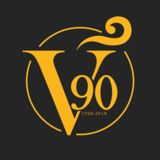