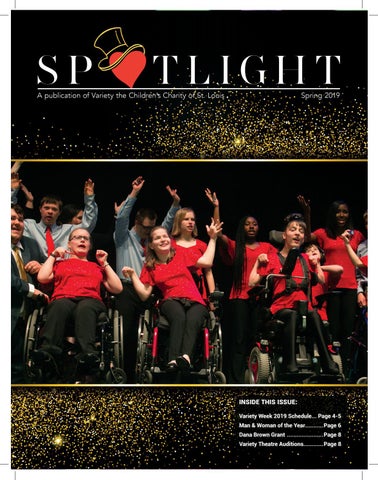 EXECUTIVE DIRECTOR Dear Variety supporters, It’s hard to believe it, but it’s already almost Variety Week – the time when we celebrate the abilities of Variety Kids for an entire seven days. Occurring from April 6 – 13 this year, Variety Week gives us a chance to really connect with the community, and each of you, sharing the power of our promise to ensure each Variety Kid realizes his or her potential. It is our promise that we will provide local kids and teens with special needs access to vital medical equipment and therapy services that help them engage with their world. We also promise to give Variety Kids the opportunity to participate in innovative programs, helping them make lifelong friends and conquer new challenges every day. And we hope that you will, in turn, promise to work alongside us as we strive to give each Variety Kid a chance to live an amazing life. Whether you attend an event during Variety Week or support Variety Kids in one of many ways throughout the year, we thank you for your continued generosity! Sincerely,

Spotlight on Variety Teen Madi When Madi was diagnosed with cerebral palsy as a young child, doctors said she would have a chance at walking if she had access to necessary medical equipment and therapy. Variety then made a promise to Madi that we would do whatever we could to give her the opportunity to take a step. Madi has since received four walkers, two standers, two strollers, a power assist wheelchair, a set of canes, a WalkAide and about 10 pairs of orthotic braces from Variety, all designed to provide increased mobility. Variety also covers many of Madi’s physical therapy visits, where she builds up her strength, balance and endurance. And Madi has participated in our Variety Theatre and Adventure Camp programs – both of which have given her confidence in herself and the motivation to keep moving forward. All of this led up to one day just a few months ago when, at the age of 14, Madi took her first unassisted steps. “There are really no perfect words to describe how proud and ecstatic we were,” says Traci, Madi’s mom. “Most people wait a year for their baby to walk. We just had to wait a few extra.” Now, nothing can stop Madi, whose self-esteem and independence just continues to grow. “Variety is a huge help in Madi’s everyday life,” says Traci.

And that is the power of our promise.

Most people wait a year for their baby to walk. We just had to wait a few extra.

You’re invited to join us for a magical evening at Dinner with the Stars, Variety St. Louis’ premier black tie gala for more than half a century. Chaired by Marilyn Fox for 23 magnificent years, this star-studded event brings together some of St. Louis’ most esteemed philanthropic citizens to celebrate Variety and enjoy a memorable performance by an iconic headlining entertainer. This year, we are excited to welcome 17-time Grammy Award-winning and platinum-selling musician Sting to the Dinner with the Stars stage. Throughout Sting’s illustrious career, he has sold close to 100 million albums from his combined work with The Police – the band was inducted into The Rock and Roll Hall of Fame in 2003 – and as one of the world’s most distinctive solo artists. Sting is also a lauded composer, actor and author. In addition to his 17 Grammy Awards, Sting has received four Brits, a Golden Globe, an Emmy, four Oscar nominations, a TONY nomination, Billboard Magazine’s Century Award and was the MusiCares 2004 Person of the Year, among many other honors. His most recent album in collaboration with reggae icon, Shaggy, 44/876, was released in 2018 and earned the pair a Grammy for ‘Best Reggae Album’ at the 2019 Grammy Awards. The evening’s program, brought to you by hometown comedian Joe Torry as he hosts alongside Variety Kids, will also include the inclusive Variety Children’s Chorus and will celebrate Variety’s 2019 Man and Woman of the Year, Spencer Koch and Carol Staenberg. Generously underwritten by the Steward Family Foundation, World Wide Technology and Centene Charitable Foundation, all proceeds from Dinner with the Stars will benefit Variety Kids – the local children with special needs Variety serves.

T ICK E T S ON S A L E NOW For more information and to purchase your tickets or a table, visit VarietySTL.org and click on Dinner with the Stars. Individual tickets for Variety’s program, including Sting’s memorable performance, may be purchased through Ticketmaster and start at $72. Tickets purchased through Variety start at $1,000 and include a cocktail reception, dinner, program and Sting’s performance. Contact Mary Murawski at 314-720-7712 or mary@varietystl.org with any questions.

Runway Lights Fashion Show Celebrate the start of Variety Week in style with Runway Lights Fashion Show, chaired by Thelma Steward and featuring the sophisticated, modern designs of Lafayette 148 New York. The groundbreaking fashion house’s Spring 2019 Collection, on display at this year’s event, continues to build on an established brand that exudes quality, innovation and style. In addition to the region’s top models, you’ll also find our own Ameren Power Kids on the runway. They will demonstrate their power wheelchairs and model beautiful designs created just for them by designer Carmen Marc Valvo.

Variety Family Celebration Day All Variety families are invited to join us for a fun day of activities for all ages and abilities! Held at Chesterfield Athletic Complex from 1 p.m. to 4 p.m. on April 7, the day will include the Bubble Bus, a therapeutic bike course, crafts, games and more. Food and drink will be provided. Register in advance at VarietySTL.org.

Imo’s for Kids Day It’s easy to help Variety Kids by ordering your favorite pizza (or pasta, or appetizer, or…) from your local Imo’s on April 10. A percentage of each store’s sales on this day will go to help Variety Kids – now that’s what we call the Care Beyond Compare!

M a n & W o m an o f t h e Y e ar Each year, Variety selects one man and one woman who have exemplified what it means to give back to their community and help shape St. Louis for the better.

This year’s Woman of the Year, Carol Staenberg, has been instrumental in supporting numerous organizations throughout St. Louis. She is the immediate past chair of the College Bound Board, is currently a member of The Lift for Life Academy Foundation Board and sits on the executive council of the Holocaust Museum and Learning Center of St. Louis. Previously, Carol served on the board of Jewish Family and Children’s Services and volunteered for many years at the Harvey Kornblum Jewish Food Pantry. Carol is also a strong believer in preserving the arts, having served as a beneficiary of the Center of Creative Arts (COCA). Her ties to Variety run deep – her husband, Michael, serves on the Variety board and both are passionate about Variety’s mission. With all of this dedication to the community, it is no surprise that this is not Carol’s first award – she has often been recognized for her contributions, including the Women of Achievement Award in 2012, among others. Our 2019 Man of the Year, Spencer Koch, has been deeply involved in our community. For 23 years, Spencer served as general manager of KTVI/FOX 2 News and KPLR 11. In his tenure, he not only made FOX 2 the most-watched local news station in St. Louis, but also demonstrated a dedication to serving the region. Under his leadership, FOX 2 has raised millions of dollars for 45 local organizations, including Variety St. Louis. The stations have served as a Media Partner with Variety for eight years, giving Variety Kids a voice by sharing their stories with the community. This dedication resulted in several awards and recognitions for both Spencer and his stations, including a Variety International Award in 2014, the Station Excellence Award by Mid America NATAS three times and his most recent achievement of being inducted in the St. Louis Press Club Hall of Fame. Congratulations to both Carol and Spencer on their honors – thank you for all you do for Variety and the St. Louis area. Welcome to a long list of esteemed, civic-minded St. Louisans Variety has recognized through the years! 6

dana brown Grant We are pleased to announce that Variety is again the recipient of a generous grant from The Dana Brown Charitable Trust. The Trust, established by well-known St. Louis entrepreneur and philanthropist Dana Brown, supports the work of St. Louis organizations dedicated to meeting the needs of local children. This year’s $25,000 gift will benefit the Variety Theatre program, and will go towards providing kids and teens of all abilities the opportunity to participate in a full-length musical theatre production alongside a professional adult cast. Through their time in the spotlight, these children learn new skills, make friends, gain confidence and more, and this grant will continue to further this mission.

join the Variety Theatre cast We are looking for talented adults, teens and children to sing and dance their way into the hearts of our audience members. Variety Theatre’s 2019 production of Disney’s Mary Poppins will take place Oct. 18 – 20 and Oct. 25 – 27, 2019, featuring a Children’s Ensemble comprised of kids and teens of all abilities performing alongside a professional adult cast. Auditions begin April 29, 2019. Learn more at VarietyTheatre.org. 8

Tributes and Memorials are a great way to honor a loved one. Whether it’s a gift to provide a lasting remembrance or honoring someone on a special occasion, Variety is privileged to receive such generosity.

Variety in the Morning

Dinner with the Stars

In Variety's Spring 2019 Spotlight newsletter, you'll find everything you need to know for our upcoming Variety Week. We also include an ins...

In Variety's Spring 2019 Spotlight newsletter, you'll find everything you need to know for our upcoming Variety Week. We also include an ins...