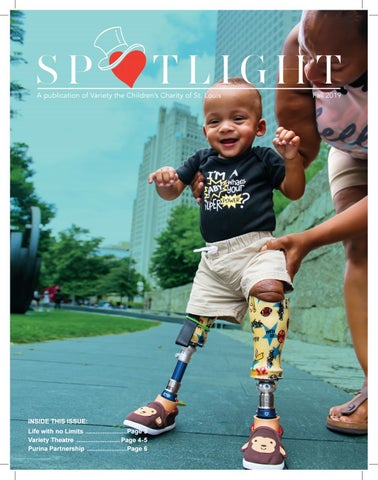 A publication of Variety the Childrenâ&amp;#x20AC;&amp;#x2122;s Charity of St. Louis

Dear friends, We are in the midst of preparing another outstanding Variety Theatre production. This year’s show, Mary Poppins, will yet again feature local kids and teens with special needs performing alongside a professional cast. What these Variety Kids and Teens gain as being part of this cast, or working behind the scenes as Variety Theatre interns, stays with them long after the program ends. With each show, they are learning new skills, making friends, growing their independence and, perhaps most importantly, building confidence and self-esteem. That’s why we have decided to extend Variety Theatre to two weekends, giving Variety Kids even more chances to grow and learn. This also means that, for the very first time, you have six days – and nine shows – to witness the magic that is Variety Theatre. So I’m asking you now to come out to a show or two. Because not only will you experience the pure joy that comes with seeing an expertly produced live show, but you will also be helping Variety Kids find confidence in that spotlight. Thank you.

In 2018, 92% of Variety Kids showed an increase in self-esteem after attending Variety Theatre’s Curtain Up Camp. 2

Life with no Limits Even at a few months old, Variety Kid Joseph knew something was different. He would look at his twin sister Jessica’s feet, and then look down for his own to find nothing there. Joseph experienced complications at birth that caused him to lose his legs. But, even though there were many things Joseph could do, he became frustrated as he watched Jessica do things he could not. That has all changed now that Joseph has his first pair of prosthetic legs, thanks to Variety and you – our supporters.

“When Joseph tried on his legs for the first time, his smile lit up the room,” says his mom, Deonna. “He has since become more outgoing, adventurous and happy.”

Although Joseph is still learning how to use his new legs, he has already been able to stand to reach objects, sit in a chair independently, and – his favorite thing – dance! Eventually, prosthetic legs will make it possible for Joseph to play with his friends, join a sports team, take the steps, travel the world and have his dream job.

“Thanks to Variety, Joseph will be able to have a full life without limitations,” says Deonna. Beyond the prosthetics, Deonna says that Variety provides another important component – social interaction for the entire family. Through Variety’s events, Joseph’s family has spent time networking and making friends with other families. “This journey is not just difficult for Joseph – our entire family has to adapt and change our lifestyle,” Deonna says. Thank you for giving Variety Kids like Joseph a life without limits. As Deonna says, “YOU

are the reason that Variety is able to help so many families, and give children a chance at a happy, healthy and safe childhood.” If you’d like to make a gift to Variety you can do it online at HelpAVarietyKid.org or call Mary Murawski at 314-720-7712. 3

Why Variety Theatre – Billy’s Story Variety Theatre has a lasting impact on the local Variety Kids and Teens we serve. That has been the case for Variety Teen Billy, who first joined our inclusive Children’s Ensemble last year. Billy’s mom, Brandy, shares that she has already seen a difference in her son.

“His confidence has greatly improved,” says Brandy. “He has completely come out of his shell since joining Variety.” Billy has been diagnosed with autism, and he often finds it difficult to make new friends and find confidence in his abilities. Brandy says that Billy typically wears headphones “to ignore the world,” and only speaks when he is approached first. Since joining Variety Theatre, and the Variety Children’s Chorus, in 2018, Billy has needed his headphones less, and is talking with his peers more. He has made many friends at Variety Theatre, and looks forward to joining them again. Outside of Variety Theatre, Billy has also found the confidence to try new things. He auditioned – and made the cast – for a school production. He has made new friends at school. And he even sang as part of a quartet at our 2018 Dinner with the Stars.

“We can’t say thank you enough to Variety and the supporters who have given Billy the chance to accomplish these amazing things,” says Brandy. By attending a Variety Theatre production, you are not only enjoying a magical production, you are also supporting kids and teens, like Billy, as they learn new skills, make friends and build confidence. Reserve your seats now for Mary Poppins at Touhill.org.

Northwestern Mutual Supports Variety Theatre For the first time ever, Variety Theatre has expanded to offer magical shows across two weekends. Not only does this give audiences extra chances to see this wonderful production, it also gives Variety Kids more opportunities to perform.

tickets in the theatre for one performance, inviting clients and encouraging their employees, families and friends to attend the show and see for themselves how Variety Theatre transforms the lives of Variety Kids, and the audiences who see them perform.

The expansion of our program would not be possible without the help of fantastic partners like Northwestern Mutual. This organization truly believes in Variety’s vision of creating a world where possibilities are reimagined, as that is what Northwestern Mutual does every day for their clients.

Thank you, Northwestern Mutual and Variety board member Steve Gross, who is managing partner of Gross Financial Group of Northwestern Mutual, for your support. It is because of you that Variety Kids will have more chances to grow their confidence on stage and perform for an audience that is cheering them on with every scene.

Northwestern Mutual stepped up in a big way this year to help spread Variety Theatre’s message of inclusion to the St. Louis community. They purchased all of the

Don’t miss the show that will be practically perfect in every way! Variety Theatre’s 2019 production, Mary Poppins, will take the stage at the Touhill Performing Arts Center October 18 – 27, 2019. Prepare to be inspired as Bert dances upside down, Mary Poppins soars above the audience and Variety Kids join a professional cast for a magical production you won’t soon forget. Tickets available now at Touhill.org.

Purina Brings Variety Kids and Pets Together Purina believes in bringing people of all abilities together with pets. As part of this mission, they have offered invaluable support to Variety and Variety Kids over the years, a partnership that grew exponentially during Adventure Camp 2019. Our Week 3 Adventure Campers had the chance to visit Purina Farms for an entire day this summer, a trip that was planned by the Purina staff specifically for Variety Kids. In the morning, campers met farm animals, watched a dog show and learned about duck herding. That afternoon, they rotated through many great activities, including story time and craft stations where campers made their own treat canisters and dog toys. During one activity, campers learned about pet safety, including the best way to pet a dog, how to put on a harness and what dogs can and canâ&amp;#x20AC;&amp;#x2122;t eat. To wrap up the day, Variety Kids got to put everything they learned to the test while meeting a CHAMP therapy dog as well as adoptable puppies and kittens from the Franklin County Humane Society. In all, it was a great day planned by Purina staff members who are passionate about what they do â&amp;#x20AC;&amp;#x201C; bringing people and animals together. Thank you, Purina and Purina Farms for the great experience! If your organization is interested in partnering with Adventure Camp, please contact Robin Diehl at Robin@Varietystl.org or 314-720 -7717.

HONORARIUMS In Honor of Tatum Douglas Mariya Ivanova In Honor of the cast of “Footloose’” at the Muny Whit Reichert In Honor of Selah Harris Bob and Kim Brown In Honor of Emily Joost’s 20th Birthday Sandra and Eugene Behrmann Mary and James Frierdich In Honor of Spencer Koch Christine and David Chadwick In Honor of John and Michele David Workman In Honor of David and Thelma Steward Eric and Sheila Pearson Ross Wardenburg In Honor of David Steward’s Birthday Julie, Mike, Lenore, and Edwin Pepper In Honor of Matt and Stephanie Wright Robert Heideman

Buy a Pizza, Help a Variety Kid Craving the Square Beyond Compare? Throughout September 2019, you can satisfy your craving AND help Variety Kids! Over the years, Imo’s Pizza and the St. Louis community have stepped up to raise more than $2 million for local kids with special needs through the Care Beyond Compare program. You can continue this tradition of support this month, when a portion of proceeds from every extra-large pizza sold will benefit Variety! Show you care this September and head to your local Imo’s, or order online at ImosPizza.com, to help Variety Kids!

Variety Family Conference Save the Date! The 2019 Variety Family Conference will take place on Saturday, December 7 from 9 am to 12 pm. Open to Variety families as well as members of the community, this conference will be a morning filled with education and discussion. Our keynote speaker, Ann Turnbull, will speak to family quality of life and family support as a whole. Childcare will be available. Check VarietySTL.org for more information and registration details soon. We hope to see you there!

Variety the Children's Charity of St. Louis' Fall 2019 Spotlight features an inspiring Variety Kid story, information about our upcoming Variety Theatre program, a story about what was new at Adventure Camp this summer and more. 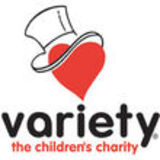