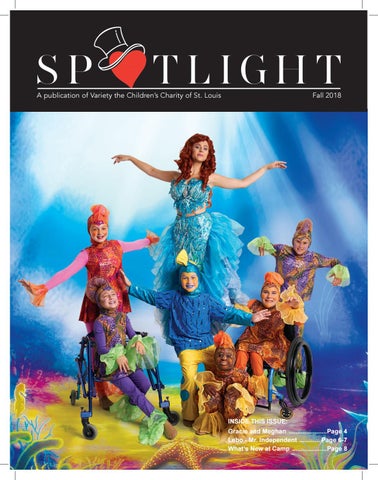 A publication of Variety the Children’s Charity of St. Louis

Executive Director Dear Friends of Variety, At Variety, we celebrate milestones every day. From a child taking his first steps with the help of a walker to a teen moving between classes on her own by way of a power wheelchair. This year, we are preparing to celebrate a major milestone for one of our most beloved programs, Variety Theatre. Our 2018 production of Disney’s The Little Mermaid will mark Variety Theatre’s 10th production. That’s a decade of inspiring the St. Louis community, the audiences who attend our shows and every member of the cast and crew who have been involved – many since the very beginning. Most importantly, it celebrates 10 years of improving the lives of the children and teens with special needs who take the stage alongside the professional cast for each show. These Variety Kids have learned new skills, built their confidence and self-esteem, established their independence and made lifelong friends over the years. For many of these kids and teens, the magic you see on stage would not be possible without the help of some very special equipment. From orthotics to hearing aides to walkers to power wheelchairs and more, our durable medical equipment program provides these necessary tools to not only allow these Variety Kids to sing and dance, but to assist them throughout their daily lives as well. Like all of our programs, equipment and Variety Theatre work together to make a difference in the lives of children with special needs. We hope you will join us in celebrating ten years of Variety Theatre, and the impact it, and each of our programs, have on Variety Kids. Thank you,

For U.S. Bank, making a commitment to supporting Variety Theatre just made sense. U.S. Bank invests in innovative programs that build audiences for the arts in underserved populations as well as those that make differences in the lives of children – both of which are part of Variety Theatre’s core mission. U.S. Bank has been a proud supporter of Variety Theatre for many of the program’s previous productions, and will yet again serve as a major Corporate Supporter for this year’s 10th anniversary production. They are consistently inspired with the program’s ability to impact the St. Louis community, whether through the kids with special needs it serves on stage or the multitude of audience members that attend each show. “The way Variety Theatre has influenced, not only the St. Louis community, but other organizations is astounding,” says Larry Otto, St. Louis Market President, U.S. Bank. “It is a truly unique and innovative program that has become an example and model for others to follow. It is the first of its kind, but I’m certain it won’t be the only one for long.” Thank you, U.S. Bank, for your continued support of Variety Theatre and Variety Kids.

The National Endowment for the Arts (NEA) has approved a $10,000 Art Works Grant to support the Variety Theatre program. The Art Works Category supports projects, like Variety Theatre, that focus on the creation of art that meets the highest standards of excellence. It also focuses on programs that encourage public engagement with excellent art, lifelong learning in the arts and the strengthening of communities through the arts. This grant will help Variety Theatre continue its mission of providing St. Louis-area kids and teens with special needs the opportunity to learn new skills and increase their self-esteem through artistic expression. Thank you to the NEA for your generous support of Variety Theatre! 3

When asked about Gracie, Meghan says, “She is just a really positive, bright and funny person. She’s so cool – and she helps with my confidence too. I think, ‘If she can do this, I can do this!’” Gracie adds, “Meghan is such an inspiration! We could all learn a lesson from her.” These girls, and their Variety cast mates, truly have been an inspiration for us all. They influence each other, their fellow cast and crew, and audiences with their stunning skills, but also their drive and determination to reach for their dreams. And Variety Theatre has had this same effect on all of our participants, both with and without disabilities. Meghan puts it best, saying, “Variety Theatre is bigger than anyone can imagine.”

And, for both girls, Theatre has been about the lifelong friendships they have formed, both with each other and other members of the cast. “Tom Sawyer (Variety Theatre’s first production) was such an amazing experience. The cast and the crew became family, and some of those people are still in our lives today. They continue to inspire me to follow my dreams,” says Gracie.

Prepare to be inspired

For Variety families, having the correct medical equipment is a constant challenge. As children grow and their needs change, so, too, does their equipment. But this equipment can be expensive, and insurance doesn’t always cover it. Variety receives an average of

$150,000 in requests for medical equipment every month. And this number only continues to grow. This is where we need your help. Without you, we cannot continue to fulfill these ever-increasing – and ever-important – requests. Through your generosity, equipment can be purchased to help a child learn new skills, build confidence and establish independence. Most importantly, your gift will allow a child to just be a kid.

Mr. Independent Lebo may use a wheelchair to get around most of the time, but you won’t always find him in it. He is constantly striving to gain more and more independence, often using his strong arms to get around. His dream, however, is to walk on his own one day. Lebo’s new stretching ankle foot orthotics (AFOs), from Variety, are the first step towards this goal. These AFOs train Lebo’s feet, which are affected by cerebral palsy, into a position that will eventually allow him to walk – not only increasing his mobility, but also establishing his sought-after independence. It wasn’t until recently, however, that this level of independence seemed to be within Lebo’s reach. His parents adopted him just this past December from a group home in South Africa. Lebo’s mom, Angie, says that, although the home tried time and time again to get him the equipment he needed, resources were limited. But once they brought Lebo home, Angie realized that even the most necessary equipment can be hard to come by in the United States as well.

“I knew equipment was expensive, but I really had no idea,” Angie says. Angie, however, was determined to find a way to help Lebo get on his feet, so she found Variety. Since that day, Variety and our supporters have helped Lebo in more ways than one. In addition to the AFOs, Lebo also came to Adventure Camp this summer. Attending Camp not only helped him strengthen his arms – it strengthened his belief in himself. Before coming to the U.S., Lebo had never even seen another person in a wheelchair. This can be difficult on a young boy who already feels so different from everyone else. Now, he has friends with unique abilities – just like him! Lebo will need a lot of hope, determination and equipment to walk on his own two feet. With the help of Variety and supporters like you, we can give him all of this and more. 7

What’s new at camp We had so many new experiences at this summer’s Adventure Camp! We went fishing with the Missouri Department of Conservation, visited the new Museum at the Gateway Arch, experimented with Robotics, played music with Different Dynamics, practiced basketball with the St. Louis Surge, learned about animals at World Bird Sanctuary and so much more. One of our new, camp-long programs was brought to us by our awesome partners at Purina. The Mutt-i-grees™ Curriculum is an exciting new program that focuses on social and emotional learning as well as self-awareness and even teamwork. Through books, games and time spent with therapy dogs, we learned all about how to treat others through learning how to treat animals. We were also taught how to read emotions in others, as well as how to better express our own feelings, through demonstrations of how a dog shows his emotions. Finally, the curriculum taught us that it is okay to be ourselves, and to be a little different, by showing us how every dog is good at different things – just like people! Purina also gave us tons of resources for the program, including a big binder full of great activities and ideas. Thank you, Purina!

Help Bring More New Adventures to Camp and Get Help on Your Taxes Through Missouri’s Youth Opportunity Program (YOP), all donors who contribute a minimum of $1,000 to Adventure Camp are eligible to receive a Missouri state tax credit and reduce the taxes they owe the state. These gifts allow Variety St. Louis to continue to bring an exciting – and free – camp experience to children and teens with special needs throughout the St. Louis area. Learn more at VarietySTL.org/YOP or call Brett Schott at 314-720-7707.

In Honor of Alaina Parker Carolyn and Michael Corry

In Honor of Willow Schreiber Jon and Jo Daniel

In Honor of Albert Porter Richard and Judith Schulz

In Honor of Nicholas Eynon Barb and Richard Nielsen

In Honor of All Variety Kids Joseph Hamilton

February 2, 2019 | St. Louis University High School Q: What’s better than a Trivia Night? A: Trivia Night that helps local children with special needs! Join us in February 2019 for a fun evening filled with good friends and ten rounds questions, all benefiting Variety Kids. Some Variety Kids will even be in attendance to help read questions and cheer you on to victory. This is a great chance to meet Variety families, learn a little more about Variety and, of course, have a blast! Details available later this year on Young Variety’s Facebook page. Phone: (314) 720-7700 • www.varietystl.org