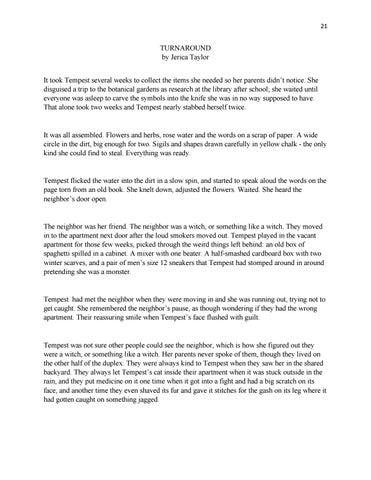 TURNAROUND by Jerica Taylor It took Tempest several weeks to collect the items she needed so her parents didn’t notice. She disguised a trip to the botanical gardens as research at the library after school; she waited until everyone was asleep to carve the symbols into the knife she was in no way supposed to have. That alone took two weeks and Tempest nearly stabbed herself twice.

It was all assembled. Flowers and herbs, rose water and the words on a scrap of paper. A wide circle in the dirt, big enough for two. Sigils and shapes drawn carefully in yellow chalk - the only kind she could find to steal. Everything was ready.

Tempest flicked the water into the dirt in a slow spin, and started to speak aloud the words on the page torn from an old book. She knelt down, adjusted the flowers. Waited. She heard the neighbor’s door open.

The neighbor was her friend. The neighbor was a witch, or something like a witch. They moved in to the apartment next door after the loud smokers moved out. Tempest played in the vacant apartment for those few weeks, picked through the weird things left behind: an old box of spaghetti spilled in a cabinet. A mixer with one beater. A half-smashed cardboard box with two winter scarves, and a pair of men’s size 12 sneakers that Tempest had stomped around in around pretending she was a monster.

Tempest had met the neighbor when they were moving in and she was running out, trying not to get caught. She remembered the neighbor’s pause, as though wondering if they had the wrong apartment. Their reassuring smile when Tempest’s face flushed with guilt.

Tempest was not sure other people could see the neighbor, which is how she figured out they were a witch, or something like a witch. Her parents never spoke of them, though they lived on the other half of the duplex. They were always kind to Tempest when they saw her in the shared backyard. They always let Tempest’s cat inside their apartment when it was stuck outside in the rain, and they put medicine on it one time when it got into a fight and had a big scratch on its face, and another time they even shaved its fur and gave it stitches for the gash on its leg where it had gotten caught on something jagged. 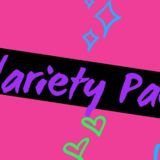 Check out our third and final issue for the year 2020! It's filled with heart-breaking non fiction to poetry about growth and revolution to...

Check out our third and final issue for the year 2020! It's filled with heart-breaking non fiction to poetry about growth and revolution to...