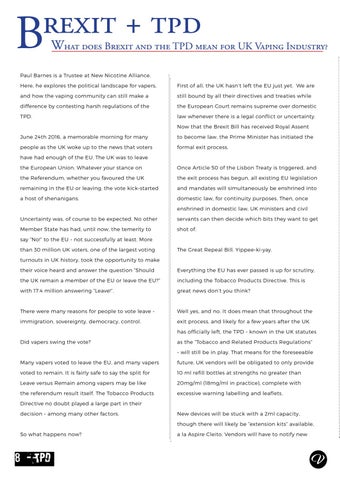 What does Brexit and the TPD mean for UK Vaping Industry?

Paul Barnes is a Trustee at New Nicotine Alliance. Here, he explores the political landscape for vapers,

First of all, the UK hasn’t left the EU just yet. We are

and how the vaping community can still make a

still bound by all their directives and treaties while

difference by contesting harsh regulations of the

law whenever there is a legal conflict or uncertainty. Now that the Brexit Bill has received Royal Assent

to become law, the Prime Minister has initiated the

people as the UK woke up to the news that voters

have had enough of the EU. The UK was to leave the European Union. Whatever your stance on

Once Article 50 of the Lisbon Treaty is triggered, and

the Referendum, whether you favoured the UK

the exit process has begun, all existing EU legislation

remaining in the EU or leaving, the vote kick-started

and mandates will simultaneously be enshrined into

a host of shenanigans.

Uncertainty was, of course to be expected. No other

servants can then decide which bits they want to get

Member State has had, until now, the temerity to

say “No!” to the EU - not successfully at least. More than 30 million UK voters, one of the largest voting

turnouts in UK history, took the opportunity to make their voice heard and answer the question “Should

Everything the EU has ever passed is up for scrutiny,

the UK remain a member of the EU or leave the EU?”

including the Tobacco Products Directive. This is

There were many reasons for people to vote leave -

Well yes, and no. It does mean that throughout the

exit process, and likely for a few years after the UK has officially left, the TPD - known in the UK statutes

Did vapers swing the vote?

as the “Tobacco and Related Products Regulations” - will still be in play. That means for the foreseeable

Many vapers voted to leave the EU, and many vapers

future, UK vendors will be obligated to only provide

voted to remain. It is fairly safe to say the split for

10 ml refill bottles at strengths no greater than

the referendum result itself. The Tobacco Products

Directive no doubt played a large part in their decision - among many other factors.

New devices will be stuck with a 2ml capacity, though there will likely be “extension kits” available,

So what happens now?

a la Aspire Cleito. Vendors will have to notify new 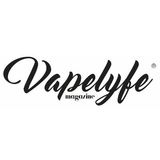