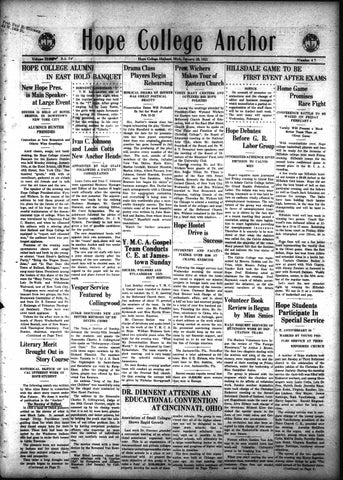 HOPE COLLEGE ALUMNI Drama Class Pre* Wichers HILLSDALE GAME TO BE Makes Tour of IN EAST HOLfl BANQUET Players Begin FIRST EVENT AFTER EXAMS Rehearsing Eastern Church DIMNENTTADDBESSES "Y* New Hope Pres. * NOTICE • Home Game Y. W. hal/- another one of On account of semester ex- • BIBLICAL DRAMA OF ESTHER VISITS MANY CENTERS AND * is Main Speaker- its big treafs last night when * aminations and the change of • HAS GREAT POETICAL OUTLINES HIS HOPE Promises the regular rmeeting was held * editor and business manager * i BEAUTY f POLICIES at Large Event in the "Y" 88pn. After group * which necessitates a partial re- • Rare Fight singing, l e d ' b y Lucy Rader, the girls were again fortunate in having D*. Dimnent, retiring president, as the speaker for the evening. In his very pleasing manner he spokr? on the subject <if "Liberty."

Some Conversation During Meals at the Dorm.

in the church and other places in the world. .....Gerald Huenink I have always held the greatest Ruth GeerNngs, Irving Decker Berdean Welling respect for the able leadership of Dave Reardon Dr. E. D, Dimnent, retiring presi— = dent of the college, and for my friend, President-elect Wynand Wichers, under whose guidance the school will continue its good work. Yes, there are a few minor things at Hope we should like to see improved, but we can only expect to get them when Hope gets proper recognition and the support she deserves. DICK BOTER.

iSenior girl of Voorhees to another senior sitting next to her at dinner: "Let's go to the North Pole to teach. You could be at the negative end, and I'd be the affirmative." _ Male—"Men are more valuable than women." Female—"Ridiculous! You can't prove it."1 Male—"I can prove it. Every man his price and gets it. If brides do not run away they are given away." Fair One—-"It will soon be spring now and," turning to the male at her right, "You know 'In the Spring a Young Man's fancy lightly turns to—' "What the girls have been thinking of all winter"—snapped the male. "ELEGY WRITTEN OVER

I little knew A month ago That life Could treat A student so. I laughed I sang And made . My date.

Now my • • Professor Cries • "Too late!" I knew hpw To woo In French In sports I never S Saw the Bench But what Avail My varsity Letter.

pavement, a dirty"'silver gray. The

Kmcrsonian—A health number by William Clough opened the program of the Emersonian society meeting last Friday evening. The fcecond selection by John Chamberlain was entitled Calvin Coolidge. A short biography of Coolidge's life was given. The program concluded with music by John Van Der Belt. Harry Ver Strate was appointed Blaster Critic for the evening. The Emersonian basketball team will play at Grand Rapids Friday evening. All the house members are planning to attend. From now on the Emersonians will have no excuse for being late at chapel, that is, if they lever were. The future promptness will be caused by a new mantel clock, a gift from Peter Cupery.

PICKED FROM PRODUCTS OF LAST YEAR'S SHORT STORY COURSE The following short story written by Martin Kloosterman of the present Senior Class was selected by Miss Fulmer as the best piece of work submitted in her short story course last year. We take pleasure in printing it in the "Anchor." A revised and altered edition of this same story will appear in the forthcoming "Pegasus' Pony."

JANUARY SHOE VALUES Do not miss this one. - W e urge you to come.

TEXT BOOKS for any class from the Kindergarten to the Senior of Hope. Trussel Ringbacks satisfy. If your typewriter does not function right, we can make it so. Expert always on the job.

Speaking of bearding the lion in his den, try to approach Registrar Welmers during these days of storm and stress. We suggest a week's vacation, for the poor man after it's all over.

We Invite You to Compare our Work 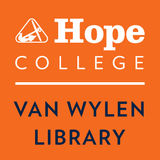