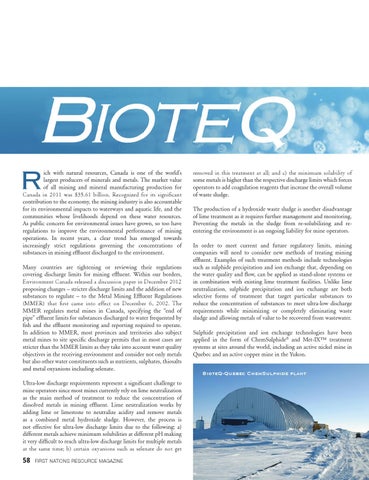 ich with natural resources, Canada is one of the world’s largest producers of minerals and metals. The market value of all mining and mineral manufacturing production for Canada in 2011 was $35.61 billion. Recognized for its significant contribution to the economy, the mining industry is also accountable for its environmental impacts to waterways and aquatic life, and the communities whose livelihoods depend on these water resources. As public concern for environmental issues have grown, so too have regulations to improve the environmental performance of mining operations. In recent years, a clear trend has emerged towards increasingly strict regulations governing the concentrations of substances in mining effluent discharged to the environment. Many countries are tightening or reviewing their regulations covering discharge limits for mining effluent. Within our borders, Environment Canada released a discussion paper in December 2012 proposing changes – stricter discharge limits and the addition of new substances to regulate – to the Metal Mining Effluent Regulations (MMER) that first came into effect on December 6, 2002. The MMER regulates metal mines in Canada, specifying the “end of pipe” effluent limits for substances discharged to water frequented by fish and the effluent monitoring and reporting required to operate. In addition to MMER, most provinces and territories also subject metal mines to site specific discharge permits that in most cases are stricter than the MMER limits as they take into account water quality objectives in the receiving environment and consider not only metals but also other water constituents such as nutrients, sulphates, thiosalts and metal oxyanions including selenate. Ultra-low discharge requirements represent a significant challenge to mine operators since most mines currently rely on lime neutralization as the main method of treatment to reduce the concentration of dissolved metals in mining effluent. Lime neutralization works by adding lime or limestone to neutralize acidity and remove metals as a combined metal hydroxide sludge. However, the process is not effective for ultra-low discharge limits due to the following: a) different metals achieve minimum solubilities at different pH making it very difficult to reach ultra-low discharge limits for multiple metals at the same time; b) certain oxyanions such as selenate do not get

removed in this treatment at all; and c) the minimum solubility of some metals is higher than the respective discharge limits which forces operators to add coagulation reagents that increase the overall volume of waste sludge. The production of a hydroxide waste sludge is another disadvantage of lime treatment as it requires further management and monitoring. Preventing the metals in the sludge from re-solubilizing and reentering the environment is an ongoing liability for mine operators. In order to meet current and future regulatory limits, mining companies will need to consider new methods of treating mining effluent. Examples of such treatment methods include technologies such as sulphide precipitation and ion exchange that, depending on the water quality and flow, can be applied as stand-alone systems or in combination with existing lime treatment facilities. Unlike lime neutralization, sulphide precipitation and ion exchange are both selective forms of treatment that target particular substances to reduce the concentration of substances to meet ultra-low discharge requirements while minimizing or completely eliminating waste sludge and allowing metals of value to be recovered from wastewater. Sulphide precipitation and ion exchange technologies have been applied in the form of ChemSulphide® and Met-IX™ treatment systems at sites around the world, including an active nickel mine in Quebec and an active copper mine in the Yukon. BioteQ-Quebec ChemSulphide plant 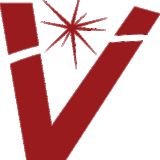 The purpose of the publication is to bring the Aboriginal Communities together, through a positive media, on the issues of suicide preventio...

The purpose of the publication is to bring the Aboriginal Communities together, through a positive media, on the issues of suicide preventio...