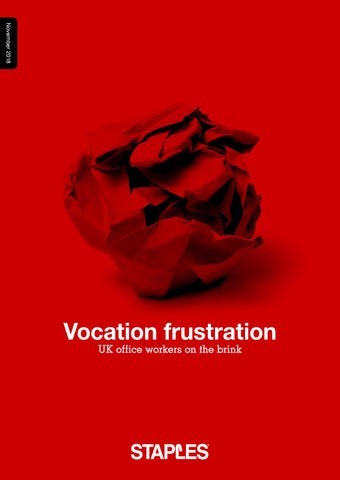 That feeling. When you can take on the world, or Monday, with a smile. When the printer just prints. When the little things you need, make the big things you’re planning, possible. When you’re in the zone, when you’re making a difference, or when you feel like a boss, even if you’re not. When it all just works. That’s the feeling that office workers are craving. But that’s the feeling, that according to our research, many are struggling to attain. The result? High levels of workplace frustration – or rather, vocation frustration – across the UK. This latest research report from Staples investigates this vocation frustration further. Because it’s time workspaces worked better for everyone involved. And it’s time workers stopped ‘jumping ship’ in pursuit of… that feeling.

Introduction The concept of job-hopping has long been debated by economists and businesses alike. It is a phenomenon that is impacting businesses in the UK. Job-hopping comes with a high price tag – according to research from Oxford Economics, it can cost a business as much as £30,000 or 34,000 EUR to replace an employee. Studies have ranged from those at the Bureau of Labor Statistics, which a year ago found that employees will have an average 11.7 jobs between the ages of 18 and 48, to data from LinkedIn, which has recently put this figure higher – at 15.

Most people spend more of their waking hours at work than at home, so the workplace is really important for the health, wellbeing and performance of employees. As this report finds, 89% seek fulfilment at work, and the physical and psychological environment are critical to achieve this.

At Staples we have investigated the issue further. Just what does the job-hopping landscape look like in the UK? What’s causing people to constantly feel frustrated in their office workspaces? And what role does the working environment have to play? We have enlisted the help of Professor Sir Cary Cooper, the expert in organisational psychology at the Alliance Manchester Business School to explore our findings. The results make for some interesting reading.

The UK’s frustrated workers Our research has unearthed some common traits across the UK. There’s a distinct sense that people want to feel good in the office environment, with 89% saying that they want to feel ‘fulfilled’ at work. There have been multiple studies about the link between the work environment and fulfilment. Ultimately, an effective workplace helps people to feel better about work, meaning they will not only be able to up their performance, they will also be less likely to want to jump ship. Our research backs up previous social studies which have drawn links between people’s work, and their basic, and even emotional, needs. Maslow’s famous pyramid theory is still referenced by many psychologists, because it tells us that once their basic needs are met, human beings seek love and a sense of belonging, then self-esteem and prestige, and finally self-actualisation. In the modern work space, self-actualisation can involve, in many instances, a sense of achievement, merit, or even pride in the environment itself. And indeed, in our research, two-in-five (41%) said they want to ‘ feel like a boss’ even if they’re not, and 83% want to be able to leave the office at the end of the day, feeling like they’ve ‘made a difference’. But, crucially, we found that too few office workers are attaining these goals. The result? Office workers in the UK feel frustrated.

A problem that’s hard to avoid So, what do workers do when they feel frustrated in the office space? Well, the answers vary, but overwhelmingly our research shows that the UK’s workers are seeking solace in escapism – either from the office workspace, from their jobs, from their situation, or even from their entire careers. In short, office workers are on the brink.

The situation is so bad in fact, that many office workers across the UK are regularly on the verge of handing in their notice at work; seeking escapism or a different environment all together. But changing jobs to a different work space isn’t always the answer. Despite the high numbers that are tempted to job-hop, lured by the prospect of a better work environment elsewhere, many soon realise that the grass isn’t as green on the other side as they had hoped. In fact, 37% say they get frustrated in a new work space in the first six months, causing the vicious circle to start once again.

look at job ads when they are frustrated

dream of escaping to the beach when they are frustrated

moan to someone when they are frustrated

The impact of the working environment on its people Our research has explored an important link between the physical workspace itself, and the people that use it. Whether it’s having comfortable lighting, space to think, relax, or unwind, or simply having an office with the right stationery supplies and a printer that doesn’t break down, the office environment itself has a huge impact on the people working in it. Get the office space right, therefore, and people will be less frustrated. They will be more likely to feel fulfilled, more likely to reach that self-actualisation goal, and more likely to stay.

How you are managed (by praise and reward instead of fault-finding), reasonable hours of work and flexible working if required, and a good quality office environment are all fundamental to enhancing job satisfaction. The physical environment is important not only because it makes the job experience fulfilling, but also because it says to employees ‘we care about you’.

Conclusion This research has shown us a problem. It has shown us that too many workers across the UK are frustrated. They are trapped in office environments that do not work for them. At Staples we understand that the workspace is both the crux of the problem, as well as the key to the solution. Having the right office space can have an unprecedented impact on workers. Space can connect, inspire, renew and take care of workers. Because when your space works, workers can feel more productive, fulfilled and happy.

To find out more about how we can support you in making your space work for you visit: www.staplesadvantage.co.uk/whenyourspaceworks

When your space works, everything works UK office workers on the brink

UK office workers on the brink