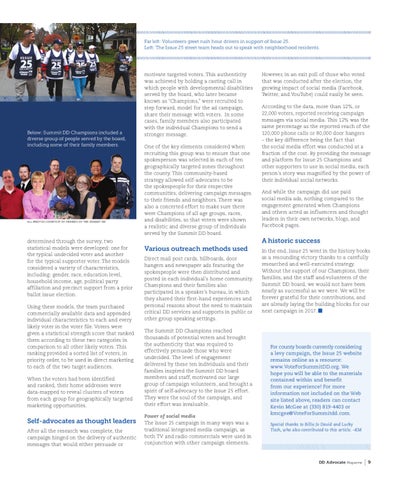 Below: Summit DD Champions included a diverse group of people served by the board, including some of their family members.

ALL PHOTOS COURTESY OF FRIENDS OF THE SUMMIT DD

determined through the survey, two statistical models were developed: one for the typical undecided voter and another for the typical supporter voter. The models considered a variety of characteristics, including: gender, race, education level, household income, age, political party affiliation and precinct support from a prior ballot issue election. Using these models, the team purchased commercially available data and appended individual characteristics to each and every likely voter in the voter file. Voters were given a statistical strength score that ranked them according to these two categories in comparison to all other likely voters. This ranking provided a sorted list of voters, in priority order, to be used in direct marketing to each of the two target audiences. When the voters had been identified and ranked, their home addresses were data-mapped to reveal clusters of voters from each group for geographically targeted marketing opportunities.

Self-advocates as thought leaders After all the research was complete, the campaign hinged on the delivery of authentic messages that would either persuade or

motivate targeted voters. This authenticity was achieved by holding a casting call in which people with developmental disabilities served by the board, who later became known as “Champions,” were recruited to step forward, model for the ad campaign, share their message with voters. In some cases, family members also participated with the individual Champions to send a stronger message. One of the key elements considered when recruiting this group was to ensure that one spokesperson was selected in each of ten geographically targeted zones throughout the county. This community-based strategy allowed self-advocates to be the spokespeople for their respective communities, delivering campaign messages to their friends and neighbors. There was also a concerted effort to make sure there were Champions of all age groups, races, and disabilities, so that voters were shown a realistic and diverse group of individuals served by the Summit DD board.

However, in an exit poll of those who voted that was conducted after the election, the growing impact of social media (Facebook, Twitter, and YouTube) could easily be seen. According to the data, more than 12%, or 22,000 voters, reported receiving campaign messages via social media. This 12% was the same percentage as the reported reach of the 120,000 phone calls or 80,000 door hangers – the key difference being the fact that the social media effort was conducted at a fraction of the cost. By providing the message and platform for Issue 25 Champions and other supporters to use in social media, each person’s story was magnified by the power of their individual social networks. And while the campaign did use paid social media ads, nothing compared to the engagement generated when Champions and others acted as influencers and thought leaders in their own networks, blogs, and Facebook pages.

A historic success Various outreach methods used Direct mail post cards, billboards, door hangers and newspaper ads featuring the spokespeople were then distributed and posted in each individual’s home community. Champions and their families also participated in a speaker’s bureau, in which they shared their first-hand experiences and personal reasons about the need to maintain critical DD services and supports in public or other group speaking settings. The Summit DD Champions reached thousands of potential voters and brought the authenticity that was required to effectively persuade those who were undecided. The level of engagement delivered by these ten individuals and their families inspired the Summit DD board members and staff, motivated our large group of campaign volunteers, and brought a spirit of self-advocacy to the Issue 25 effort. They were the soul of the campaign, and their effort was invaluable. Power of social media The Issue 25 campaign in many ways was a traditional integrated media campaign, as both TV and radio commercials were used in conjunction with other campaign elements.

In the end, Issue 25 went in the history books as a resounding victory thanks to a carefully researched and well-executed strategy. Without the support of our Champions, their families, and the staff and volunteers of the Summit DD board, we would not have been nearly as successful as we were. We will be forever grateful for their contributions, and are already laying the building blocks for our next campaign in 2017.

For county boards currently considering a levy campaign, the Issue 25 website remains online as a resource: www.VoteForSummitDD.org. We hope you will be able to the materials contained within and benefit from our experience! For more information not included on the Web site listed above, readers can contact Kevin McGee at (330) 819-4403 or kmcgee@VoteForSummitdd.com. Special thanks to Billie Jo David and Lucky Tisch, who also contributed to this article. –KM

Quarterly magazine of the Ohio Association of County Boards