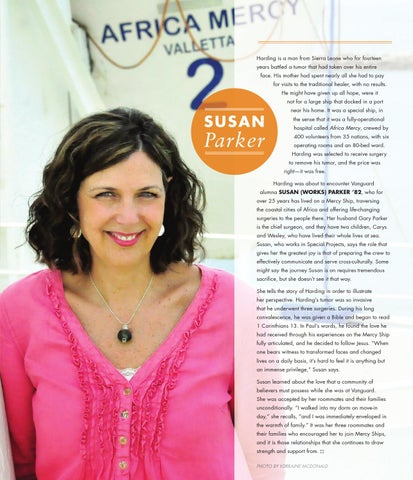 Harding is a man from Sierra Leone who for fourteen years battled a tumor that had taken over his entire face. His mother had spent nearly all she had to pay for visits to the traditional healer, with no results. He might have given up all hope, were it not for a large ship that docked in a port

near his home. It was a special ship, in the sense that it was a fully-operational hospital called Africa Mercy, crewed by 400 volunteers from 35 nations, with six operating rooms and an 80-bed ward. Harding was selected to receive surgery to remove his tumor, and the price was right—it was free. Harding was about to encounter Vanguard

alumna SuSan (WorkS) Parker ’82, who for over 25 years has lived on a Mercy Ship, traversing the coastal cities of Africa and offering life-changing surgeries to the people there. Her husband Gary Parker is the chief surgeon, and they have two children, Carys and Wesley, who have lived their whole lives at sea. Susan, who works in Special Projects, says the role that gives her the greatest joy is that of preparing the crew to effectively communicate and serve cross-culturally. Some might say the journey Susan is on requires tremendous sacrifce, but she doesn’t see it that way. She tells the story of Harding in order to illustrate her perspective. Harding’s tumor was so invasive that he underwent three surgeries. During his long convalescence, he was given a Bible and began to read 1 Corinthians 13. In Paul’s words, he found the love he had received through his experiences on the Mercy Ship fully articulated, and he decided to follow Jesus. “When one bears witness to transformed faces and changed lives on a daily basis, it’s hard to feel it is anything but an immense privilege,” Susan says. Susan learned about the love that a community of believers must possess while she was at Vanguard. She was accepted by her roommates and their families unconditionally. “I walked into my dorm on move-in day,” she recalls, “and I was immediately enveloped in the warmth of family.” It was her three roommates and their families who encouraged her to join Mercy Ships, and it is those relationships that she continues to draw strength and support from. Photo by LorrAine McDonALD vanguard magazine SPRING/SUMMER 2013 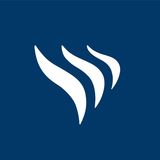