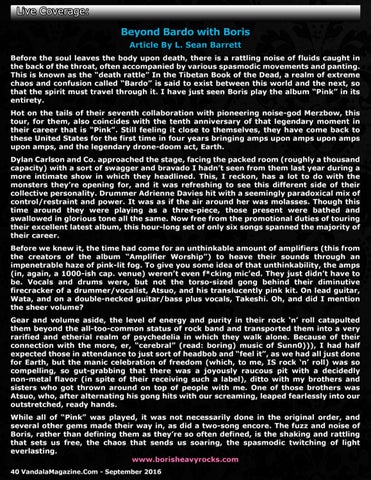 Beyond BardÂ° with Boris Article By L. Sean Barrett Before the soul leaves the body upon death, there is a rattling noise of fluids caught in the back of the throat, often accompanied by various spasmodic movements and panting. This is known as the "death rattle" In the Tibetan Book of the Dead, a realm of extreme chaos and confusion called "Bardo" is said to exist between this world and the next, so that the spirit must travel through it. I have just seen Boris play the album "Pink" in its entirety. Hot on the tails of their seventh collaboration with pioneering noise-god Merzbow, this tour, for them, also coincides with the tenth anniversary of that legendary moment in their career that is "Pink". Still feeling it close to themselves, they have come back to these United States for the first time in four years bringing amps upon amps upon amps upon amps, and the legendary drone-doom act, Earth. Dylan Carlson and Co. approached the stage, facing the packed room (roughly a thousand capacity) with a sort of swagger and bravado I hadn't seen from them last year during a more intimate show in which they headlined. This, I reckon, has a lot to do with the monsters they're opening for, and it was refreshing to see this different side of their collective personality. Drummer Adrienne Davies hit with a seemingly paradoxical mix of control/restraint and power. It was as if the air around her was molasses. Though this time around they were playing as a three-piece, those present were bathed and swallowed in glorious tone all the same. Now free from the promotional duties of touring their excellent latest album, this hour-long set of only six songs spanned the majority of their career. Before we knew it, the time had come for an unthinkable amount of amplifiers (this from the creators of the album "Amplifier Worship") to heave their sounds through an impenetrable haze of pink-lit fog. To give you some idea of that unthinkability, the amps (in, again, a 1000-ish cap. venue) weren't even f*cking mic'ed. They just didn't have to be. Vocals and drums were, but not the torso-sized gong behind their diminutive firecracker of a drummer/vocalist, Atsuo, and his translucently pink kit. On lead guitar, Wata, and on a double-necked guitar/bass plus vocals, Takeshi. Oh, and did I mention the sheer volume? Gear and volume aside, the level of energy and purity in their rock 'el' roll catapulted them beyond the all-too-common status of rock band and transported them into a very rarified and etherial realm of psychedelia in which they walk alone. Because of their connection with the more, er, "cerebral" (read: boring) music of Sunn0))), I had half expected those in attendance to just sort of headbob and "feel it", as we had all just done for Earth, but the manic celebration of freedom (which, to me, IS rock 'n' roll) was so compelling, so gut-grabbing that there was a joyously raucous pit with a decidedly non-metal flavor in spite of their receiving such a label), ditto with my brothers and sisters who got thrown around on top of people with me. One of those brothers was Atsuo, who, after alternating his gong hits with our screaming, leaped fearlessly into our outstretched, ready hands. While all of "Pink" was played, it was not necessarily done in the original order, and several other gems made their way in, as did a two-song encore. The fuzz and noise of Boris, rather than defining them as they're so often defined, is the shaking and rattling that sets us free, the chaos that sends us soaring, the spasmodic twitching of light everlasting. www.borisheavyrocks.com 40 VandalaMagazine.Com - September 2016