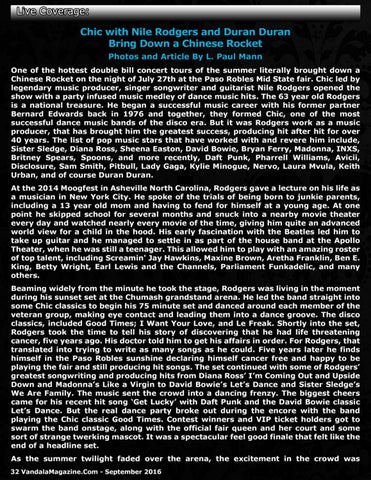 Chic with Nile Rodgers and Duran Duran Bring Down a Chinese Rocket Photos and Article By L. Paul Mann One of the hottest double bill concert tours of the summer literally brought down a Chinese Rocket on the night of July 27th at the Paso Robles Mid State fair. Chic led by legendary music producer, singer songwriter and guitarist Nile Rodgers opened the show with a party infused music medley of dance music hits. The 63 year old Rodgers is a national treasure. He began a successful music career with his former partner Bernard Edwards back in 1976 and together, they formed Chic, one of the most successful dance music bands of the disco era. But it was Rodgers work as a music producer, that has brought him the greatest success, producing hit after hit for over 40 years. The list of pop music stars that have worked with and revere him include, Sister Sledge, Diana Ross, Sheena Easton, David Bowie, Bryan Ferry, Madonna, INXS, Britney Spears, Spoons, and more recently, Daft Punk, Pharrell Williams, Avicii, Disclosure, Sam Smith, Pitbull, Lady Gaga, Kylie Minogue, Nervo, Laura Mvula, Keith Urban, and of course Duran Duran. At the 2014 Moogfest in Asheville North Carolina, Rodgers gave a lecture on his life as a musician in New York City. He spoke of the trials of being born to junkie parents, including a 13 year old mom and having to fend for himself at a young age. At one point he skipped school for several months and snuck into a nearby movie theater every day and watched nearly every movie of the time, giving him quite an advanced world view for a child in the hood. His early fascination with the Beatles led him to take up guitar and he managed to settle in as part of the house band at the Apollo Theater, when he was still a teenager. This allowed him to play with an amazing roster of top talent, including Screamin' Jay Hawkins, Maxine Brown, Aretha Franklin, Ben E. King, Betty Wright, Earl Lewis and the Channels, Parliament Funkadelic, and many others. Beaming widely from the minute he took the stage, Rodgers was living in the moment during his sunset set at the Chumash grandstand arena. He led the band straight into some Chic classics to begin his 75 minute set and danced around each member of the veteran group, making eye contact and leading them into a dance groove. The disco classics, included Good Times; I Want Your Love, and Le Freak. Shortly into the set, Rodgers took the time to tell his story of discovering that he had life threatening cancer, five years ago. His doctor told him to get his affairs in order. For Rodgers, that translated into trying to write as many songs as he could. Five years later he finds himself in the Paso Robles sunshine declaring himself cancer free and happy to be playing the fair and still producing hit songs. The set continued with some of Rodgers' greatest songwriting and producing hits from Diana Ross' I'm Coming Out and Upside Down and Madonna's Like a Virgin to David Bowie's Let's Dance and Sister Sledge's We Are Family. The music sent the crowd into a dancing frenzy. The biggest cheers came for his recent hit song 'Get Lucky' with Daft Punk and the David Bowie classic Let's Dance. But the real dance party broke out during the encore with the band playing the Chic classic Good Times. Contest winners and VIP ticket holders got to swarm the band onstage, along with the official fair queen and her court and some sort of strange twerking mascot. It was a spectacular feel good finale that felt like the end of a headline set. As the summer twilight faded over the arena, the excitement in the crowd was 32 VandalaMagazine.Com - September 2016