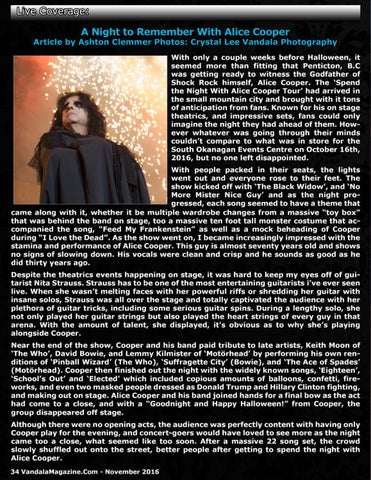 A Night to Remember With Alice Cooper Article by Ashton Clemmer Photos: Crystal Lee Vandala Photography With only a couple weeks before Halloween, it seemed more than fitting that Penticton, B. was getting ready to witness the Godfather of Shock Rock himself, Alice Cooper. The &#39;Spend the Night With Alice Cooper Tour&#39; had arrived in the small mountain city and brought with it tons of anticipation from fans. Known for his on stage theatrics, and impressive sets, fans could only imagine the night they had ahead of them. However whatever was going through their minds couldn&#39;t compare to what was in store for the South Okanagan Events Centre on October 16th, 2016, but no one left disappointed. With people packed in they seats, the lights went out and everyone rose to their feet. The show kicked off with &#39;The Black Widow&#39;, and &#39;No More Mister Nice Guy&#39; and as the night progressed, each song seemed to have a theme that came along with it, whether it be multiple wardrobe changes from a massive &quot;toy box&quot; that was behind the band on stage, too a massive ten foot tall monster costume that accompanied the song, &quot;Feed My Frankenstein&quot; as well as a mock beheading of Cooper during &quot;I Love the Dead&quot;. As the show went on, I became increasingly impressed with the stamina and performance of Alice Cooper. This guy is almost seventy years old and shows no signs of slowing down. His vocals were clean and crisp and he sounds as good as he did thirty years ago. Despite the theatrics events happening on stage, it was hard to keep my eyes off of guitarist Nita Strauss. Strauss has to be one of the most entertaining guitarists rye ever seen live. When she wasn&#39;t melting faces with her powerful riffs or shredding her guitar with insane solos, Strauss was all over the stage and totally captivated the audience with her plethora of guitar tricks, including some serious guitar spins. During a lengthy solo, she not only played her guitar strings but also played the heart strings of every guy in that arena. With the amount of talent, she displayed, it&#39;s obvious as to why she&#39;s playing alongside Cooper. Near the end of the show, Cooper and his band paid tribute to late artists, Keith Moon of &#96;The Who&#39;, David Bowie, and Lemmy Kilmister of &#96;Motorhead&#39; by performing his own renditions of &#39;Pinball Wizard&#39; (The Who), &#39;Suffragette City&#39; (Bowie), and &#39;The Ace of Spades&#39; (Motorhead). Cooper then finished out the night with the widely known songs, &#39;Eighteen&#39;, &#96;School&#39;s Out&#39; and &#39;Elected&#39; which included copious amounts of balloons, confetti, fireworks, and even two masked people dressed as Donald Trump and Hillary Clinton fighting, and making out on stage. Alice Cooper and his band joined hands for a final bow as the act had come to a close, and with a &quot;Goodnight and Happy Halloween!&quot; from Cooper, the group disappeared off stage. Although there were no opening acts, the audience was perfectly content with having only Cooper play for the evening, and concert-goers would have loved to see more as the night came too a close, what seemed like too soon. After a massive 22 song set, the crowd slowly shuffled out onto the street, better people after getting to spend the night with Alice Cooper. 34 VandalaMagazine.Com - November 2016

What better way to head into November than with live music, books and new releases. First off we had a great interview with John Nolan of Taking Back Sunday about the new album, changes and more. Another great band we caught up with was Pansy Division which took some interesting turns with the guys. Vandala also had the pleasure to talk with Ben Westhoff on his Explosive New History of West Coast Hip Hop in his book "Original Gangsters" Plus tours and more festivals! Ozzfest Meets Knotfest, Alice Cooper, Tokyo Police Club, Cyndi Lauper, Tegan & Sara and more. This and our regular features all free! 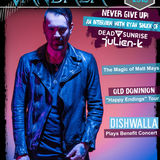