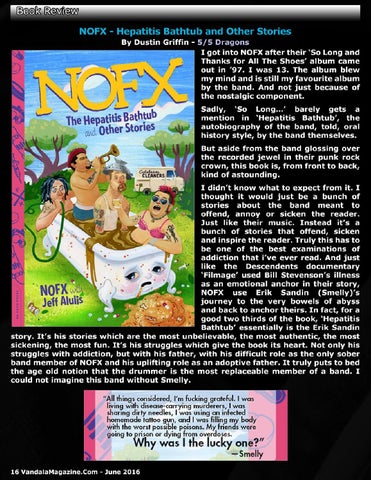 NOFX - Hepatitis Bathtub and Other Stories

By Dustin Griffin - 5/5 Dragons I got into NOFX after their 'So Long and Thanks for All The Shoes' album came out in '97. I was 13. The album blew my mind and is still my favourite album by the band. And not just because of the nostalgic component.

The Hepatitis Bathtub cad Other Stories

Sadly, 'So Long...' barely gets a mention in 'Hepatitis Bathtub', the autobiography of the band, told, oral history style, by the band themselves. But aside from the band glossing over the recorded jewel in their punk rock crown, this book is, from front to back, kind of astounding.

I didn't know what to expect from it. I thought it would just be a bunch of stories about the band meant to offend, annoy or sicken the reader. Just like their music. Instead it's a bunch of stories that offend, sicken and inspire the reader. Truly this has to be one of the best examinations of addiction that I've ever read. And just like the Descendents documentary `Filmage' used Bill Stevenson's illness as an emotional anchor in their story, NOFX use Erik Sandin (Smelly)'s e. journey to the very bowels of abyss and back to anchor theirs. In fact, for a 1:3 good two thirds of the book, 'Hepatitis Bathtub' essentially is the Erik Sandin story. It's his stories which are the most unbelievable, the most authentic, the most sickening, the most fun. It's his struggles which give the book its heart. Not only his struggles with addiction, but with his father, with his difficult role as the only sober band member of NOFX and his uplifting role as an adoptive father. It truly puts to bed the age old notion that the drummer is the most replaceable member of a band. I could not imagine this band without Smelly. "All things considered, I'm fucking grateful. I was livin9 with disease-carrying murderers, I was sharing dirty needles, I was using an infected homemade tattoo gun, and I was filling my body with the worst possible poisons. My fnends were going to rison or dying from overdoses.

I the lucky one?

Interview, shows, reviews and more interviews! What a busy month. We caught up with Johan Soderberg of Amon Amarth, along with Napalm Death...

Interview, shows, reviews and more interviews! What a busy month. We caught up with Johan Soderberg of Amon Amarth, along with Napalm Death...