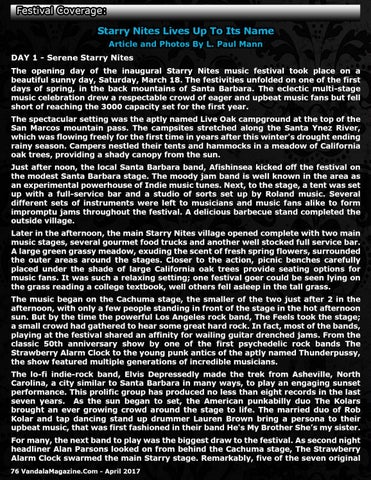 Starry Nites Lives Up To Its Name Article and Photos By L. Paul Mann DAY 1 - Serene Starry Nites The opening day of the inaugural Starry Nites music festival took place on a beautiful sunny day, Saturday, March 18. The festivities unfolded on one of the first days of spring, in the back mountains of Santa Barbara. The eclectic multi-stage music celebration drew a respectable crowd of eager and upbeat music fans but fell short of reaching the 3000 capacity set for the first year. The spectacular setting was the aptly named Live Oak campground at the top of the San Marcos mountain pass. The campsites stretched along the Santa Ynez River, which was flowing freely for the first time in years after this winter's drought ending rainy season. Campers nestled their tents and hammocks in a meadow of California oak trees, providing a shady canopy from the sun. Just after noon, the local Santa Barbara band, Afishinsea kicked off the festival on the modest Santa Barbara stage. The moody jam band is well known in the area as an experimental powerhouse of Indie music tunes. Next, to the stage, a tent was set up with a full-service bar and a studio of sorts set up by Roland music. Several different sets of instruments were left to musicians and music fans alike to form impromptu jams throughout the festival. A delicious barbecue stand completed the outside village. Later in the afternoon, the main Starry Nites village opened complete with two main music stages, several gourmet food trucks and another well stocked full service bar. A large green grassy meadow, exuding the scent of fresh spring flowers, surrounded the outer areas around the stages. Closer to the action, picnic benches carefully placed under the shade of large California oak trees provide seating options for music fans. It was such a relaxing setting; one festival goer could be seen lying on the grass reading a college textbook, well others fell asleep in the tall grass. The music began on the Cachuma stage, the smaller of the two just after 2 in the afternoon, with only a few people standing in front of the stage in the hot afternoon sun. But by the time the powerful Los Angeles rock band, The Feels took the stage; a small crowd had gathered to hear some great hard rock. In fact, most of the bands, playing at the festival shared an affinity for wailing guitar drenched jams. From the classic 50th anniversary show by one of the first psychedelic rock bands The Strawberry Alarm Clock to the young punk antics of the aptly named Thunderpussy, the show featured multiple generations of incredible musicians. The lo-fi Indie-rock band, Elvis Depressedly made the trek from Asheville, North Carolina, a city similar to Santa Barbara in many ways, to play an engaging sunset performance. This prolific group has produced no less than eight records in the last seven years. As the sun began to set, the American punkabilly duo The Kolars brought an ever growing crowd around the stage to life. The married duo of Rob Kolar and tap dancing stand up drummer Lauren Brown bring a persona to their upbeat music, that was first fashioned in their band He's My Brother She's my sister. For many, the next band to play was the biggest draw to the festival. As second night headliner Alan Parsons looked on from behind the Cachuma stage, The Strawberry Alarm Clock swarmed the main Starry stage. Remarkably, five of the seven original 76 VandalaMagazine.Com - April 201.7