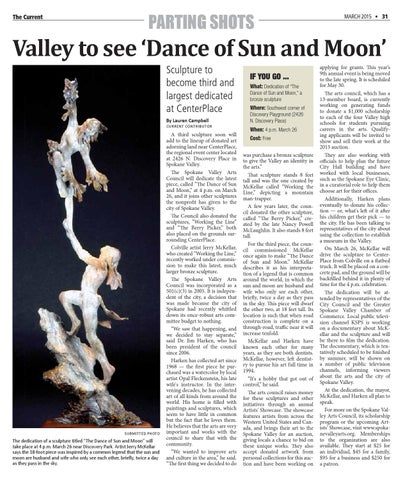 The dedication of a sculpture titled “The Dance of Sun and Moon” will take place at 4 p.m. March 26 near Discovery Park. Artist Jerry McKellar says the 18-foot piece was inspired by a common legend that the sun and moon are husband and wife who only see each other, briefly, twice a day as they pass in the sky.

A third sculpture soon will add to the lineup of donated art adorning land near CenterPlace, the regional event center located at 2426 N. Discovery Place in Spokane Valley. The Spokane Valley Arts Council will dedicate the latest piece, called “The Dance of Sun and Moon,” at 4 p.m. on March 26, and it joins other sculptures the nonprofit has given to the city of Spokane Valley. The Council also donated the sculptures, “Working the Line” and “The Berry Picker,” both also placed on the grounds surrounding CenterPlace. Colville artist Jerry McKellar, who created “Working the Line,” recently worked under commission to make this latest, much larger bronze sculpture. The Spokane Valley Arts Council was incorporated as a 501(c)(3) in 2005. It is independent of the city, a decision that was made because the city of Spokane had recently whittled down its once-robust arts committee budget to nothing. “We saw that happening, and we decided to stay separate,” said Dr. Jim Harken, who has been president of the council since 2006. Harken has collected art since 1968 — the first piece he purchased was a watercolor by local artist Opal Fleckenstein, his late wife&#39;s instructor. In the intervening decades, he has collected art of all kinds from around the world. His home is filled with paintings and sculptures, which seem to have little in common but the fact that he loves them. He believes that the arts are very important and works with the council to share that with the community. “We wanted to improve arts and culture in the area,” he said. “The first thing we decided to do

IF YOU GO ... What: Dedication of “The Dance of Sun and Moon,” a bronze sculpture Where: Southwest corner of Discovery Playground (2426 N. Discovery Place) When: 4 p.m. March 26 Cost: Free was purchase a bronze sculpture to give the Valley an identity in the arts.” That sculpture stands 8 feet tall and was the one created by McKellar called “Working the Line,” depicting a mountain man-trapper. A few years later, the council donated the other sculpture, called “The Berry Picker,” created by the late Nancy Powell McLaughlin. It also stands 8 feet tall. For the third piece, the council commissioned McKellar once again to make “The Dance of Sun and Moon.” McKellar describes it as his interpretation of a legend that is common around the world, in which the sun and moon are husband and wife who only see each other, briefly, twice a day as they pass in the sky. This piece will dwarf the other two, at 18 feet tall. Its location is such that when road construction is complete on a through-road, traffic near it will increase tenfold. McKellar and Harken have known each other for many years, as they are both dentists. McKellar, however, left dentistry to pursue his art full time in 1994. “It&#39;s a hobby that got out of control,” he said. The arts council raises money for these sculptures and other initiatives through an annual Artists&#39; Showcase. The showcase features artists from across the Western United States and Canada, and brings their art to the Spokane Valley for an auction, giving locals a chance to bid on these unique works. They also accept donated artwork from personal collections for this auction and have been working on

applying for grants. This year’s 9th annual event is being moved to the late spring. It is scheduled for May 30. The arts council, which has a 13-member board, is currently working on generating funds to donate a $1,000 scholarship to each of the four Valley high schools for students pursuing careers in the arts. Qualifying applicants will be invited to show and sell their work at the 2015 auction. They are also working with officials to help plan the future City Hall building and have worked with local businesses, such as the Spokane Eye Clinic, in a curatorial role to help them choose art for their offices. Additionally, Harken plans eventually to donate his collection — or, what&#39;s left of it after his children get their pick — to the city. He has been talking to representatives of the city about using the collection to establish a museum in the Valley. On March 26, McKellar will drive the sculpture to CenterPlace from Colville on a flatbed truck. It will be placed on a concrete pad, and the ground will be backfilled behind it in plenty of time for the 4 p.m. celebration. The dedication will be attended by representatives of the City Council and the Greater Spokane Valley Chamber of Commerce. Local public television channel KSPS is working on a documentary about McKellar and the sculpture and will be there to film the dedication. The documentary, which is tentatively scheduled to be finished by summer, will be shown on a number of public television channels, informing viewers about the arts and the city of Spokane Valley. At the dedication, the mayor, McKellar, and Harken all plan to speak. For more on the Spokane Valley Arts Council, its scholarship program or the upcoming Artists’ Showcase, visit www.spokanevalleyarts.org. Memberships to the organization are also available. They start at $25 for an individual, $45 for a family, $95 for a business and $250 for a patron.

Show Stoppers: How Valley’s successful theater programs are producing talent on — and off — the stage. www.valleycurrent.com 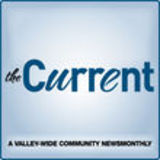