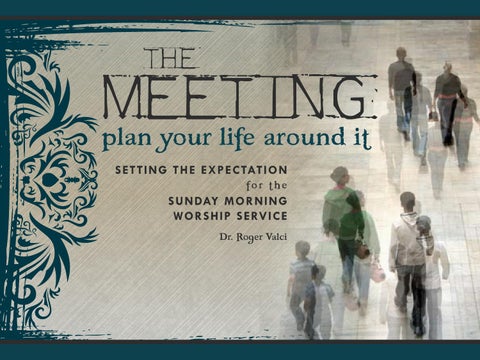 The Meeting is one of the most difficult and challenging aspects of church life to address because the expectations are so varied and so strong:

Some people are tempted to scorecard The Meeting: • It’s too long • It’s too boring • It’s poorly produced • It’s repetitious and predictable • It’s a place to get away from my children • The pastor was off with their message • “That” speaker shouldn’t be up there

Still others say... “I don’t want to go into The Meeting. It’s for older people – there’s nothing in there for me.” “There is too much variety from week to week.” “It’s been a busy stretch, and I just don’t have the energy to go to The Meeting. “I need to catch up on work, so I’ll have to pass on the The Meeting this week.” “The Meeting takes away from my family time.” “My needs aren’t being met in The Meeting, so why go?” “If I don’t get to be on the stage in The Meeting, then why should I show up?” “I don’t like the direction of The Meeting right now, so I will withhold my tithe.” “The preacher’s topic doesn’t pertain to me; I’ll stay home and watch the TV preacher.”

With such a vast variety of expectations about The Meeting, we should address some basic questions, such as:

The Sign of corporate worship would characterize the people of God through Joshua, Judges, Kings, and their bondage in Assyria and Babylon. We see it as the main issue during the rebuilding years of Nehemiah and Ezra; it would also be in full force and endorsed by Jesus and the Apostles.

There are trends in American churches that are difficult to interpret. It appears that some have fallen into a pattern of irregular attendance, be it due to golf, soccer, work, house upgrades, guest speakers not of their liking â&#x20AC;&#x201C; all factors that compete with a sacred pattern God wants all His children to embrace. We need to be reminded of a lifestyle that God asks of all His children. While an occasional absence is understandable, the weeks or months at a time that consistently show unfaithfulness to The Meeting God called is not.

On the other hand, asking how often I should go to The Meeting is a really bad question...akin to asking, “What is the least amount of money I can spend on a date and still have the girl think I will sacrifice everything for her?” The question betrays a mindset that attempts to skid by with minimal requirements. It shows that we have other “more important” elements in our lives and we want to get this “requirement” out of the way so we can move on to them. It’s sort of like telling your spouse, “Can I text you my sentiments this week? I have too many other pressing issues in life to spend time with you.”

In our consumer mentality, many people walk through the church doors expecting that their preferences, their tastes, their interests will be served. The challenge is to be honest with ourselves about our expectations and whether or not they are Biblical.

The Meeting in Jerusalem | God kills Ananias and Sapphira for robbing His glory and putting it upon themselves. (Acts 5:1-11) The Meeting in Corinth | People are sick and dying by not taking the presence and pleasure of God seriously during communion. (1 Corinthians 11:28-32) The Meeting in Ephesus | They are warned that God will turn off the lights and close up shop because â&#x20AC;&#x153;they have left their first love.â&#x20AC;? (Revelation 2:5) The Meeting in Rome | Paul writes that when we scorecard the spirituality of our brother, we insult and attack the beauty and design of how God creates people. (Romans 15:2-4)

We have an incorrect understanding of what it means to be in the presence of a holy God. When God’s omnipresence turns to His manifest presence, everything changes. Moses was told, “Do not come any closer and take off your shoes.” (Exodus 3:5) Isaiah cries out: “Woe to me! I am ruined. For I am a man of unclean lips, and I live among a people of unclean lips, and my eyes have seen the King, the Lord Almighty.” (Isaiah 6:5) Ezekiel fell on his face when he entered the throne room of God with the four living creatures and the wheels. (Ezekiel 1:28). After fasting for three weeks, Daniel describes the terror that overwhelmed him and the men with him when God spoke to him through an angel. (Daniel 10:4-17) The disciples fell facedown to the ground terrified when Jesus transfigured before them on the mountain. (Matthew 17:6) Paul was flattened on his back, blinded and could not eat or drink for three days when the glorified Christ met him on the Damascus road. (Acts 9:4-9) John, on the Lord’s day, thought he died when saw the glorified Christ. (Revelation 1:9-18)

The Meeting sets the tempo, enforces the culture, fosters the climate and reinforces the identity for the entire church. As The Meeting goes, so goes the entire ministry. God longs to manifest Himself to His people. He is looking for hungry and open people who come to The Meeting not to get, but to give. Those who enter Godâ&#x20AC;&#x2122;s house with anticipation and expectation that God shows up uniquely and powerfully when His people gather.

Dr. Roger Valci is the Lead Pastor of Valley Christian Center in Dublin, California, where he is raising up five hundred ministers to reach the Tri-Valley for Jesus Christ. In 1995, he left his engineering career and traveled to Gordon-Conwell Theological Seminary in South Hamilton, Massachusetts, to prepare for the pastorate. He received both his Masters of Divinity degree and his Doctorate in Preaching. In 2001, he became licensed as an Assembly of God minister, and in 2003, became ordained. Today, Roger lives in San Ramon, California, with his wife of twenty years, Janae, and his three children: Matthew (17), Taylor (13), and Erin (9). They all attend Valley Christian Schools.