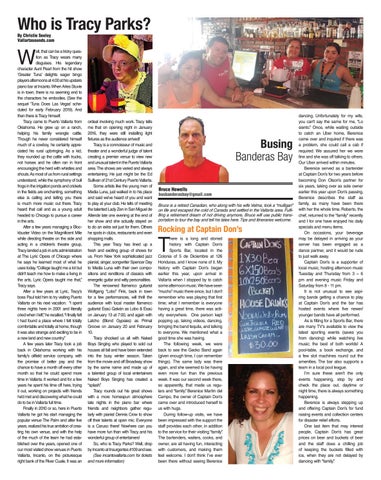 Who is Tracy Parks?

ell, that can be a tricky question as Tracy wears many disguises. His legendary character Aunt Pearl from the hit show ‘Greater Tuna’ delights eager bingo players afternoons at 4:00 at his upstairs piano bar at Incanto. When Arles Stuvie is in town, there is no seeming end to the characters he embodies. (See the sequel ‘Tuna Does Las Vegas’ scheduled for early February 2019). And then there is Tracy himself. Tracy came to Puerto Vallarta from Oklahoma. He grew up on a ranch, helping his family wrangle cattle. Though he never considered himself much of a cowboy, he certainly appreciated his rural upbringing. As a kid, they rounded up the cattle with trucks, not horses and he often ran in front encouraging the herd with whistles and shouts. As most of us from rural settings understand, while the symphony of bull frogs in the irrigation ponds and crickets in the fields are enchanting, something else is calling and telling you there is much more music out there. Tracy heard that call and as a young adult headed to Chicago to pursue a career in the arts. After a few years managing a Blockbuster Video on the Magnificent Mile while directing theatre on the side and acting in a children’s theatre group, Tracy landed a job in arts administration at The Lyric Opera of Chicago where he says he learned most of what he uses today. “College taught me a lot but didn’t teach me how to make a living in the arts, Lyric Opera taught me that,” Tracy says. After a few years at Lyric, Tracy’s boss Paul told him to try visiting Puerto Vallarta on his next vacation. “I spent three nights here in 2001 and literally cried when I left,” he recalled. “I finally felt I had found a place where I felt totally comfortable and totally at home, though it was also strange and exciting to be in a new land and new country.” A few years later Tracy took a job back in Oklahoma working with his family’s oilfield service company, with the promise of better pay and the chance to have a month off every other month so that he could spend more time in Vallarta. It worked and for a few years he spent his time off here, trying it out, working on projects with friends he’d met and discovering what he could do to be in Vallarta full time. Finally in 2010 or so, here in Puerto Vallarta he got his start managing the popular venue The Palm and after five years, realized his true ambition of creating his own venue, and with the help of the much of the team he had established over the years, opened one of our most visited show venues in Puerto Vallarta, Incanto, on the picturesque right bank of the River Cuale. It was an

ordeal involving much work. Tracy tells me that on opening night in January 2016, they were still installing light fixtures as the audience arrived! Tracy is a connoisseur of music and theater and a wonderful judge of talent creating a premier venue to view new and unusual talent in the Puerto Vallarta area. The shows are varied and always entertaining. He just might be the Ed Sullivan of 21st Century Puerto Vallarta. Some artists like the young men of Media Luna, just walked in to his place and said we’ve heard of you and want to play at your club. He tells of meeting the talented Lady Zen in San Miguel de Allende late one evening at the end of her show and she actually stayed on to do an extra set just for them. Others he spots in clubs, restaurants and even shopping malls. This year Tracy has lined up a fresh and exciting group of shows for us. From New York sophisticated jazz pianist, singer, songwriter Spencer Day to Media Luna with their own compositions and renditions of classics with energetic guitar and witty personalities. The renowned flamenco guitarist Wolfgang “Lobo” Fink, back in town for a few performances, will thrill the audience with local master flamenco guitarist Esaú Galván as Lobo & Esaú on January 13 at 7:00, and again with Latcho (Blond Gypsies) as Primal Groove on January 20 and February 10. Tracy shocked us all with Naked Boys Singing who played to sold out houses all fall and have been extended into the busy winter season. Taken from the movie and off Broadway show by the same name and made up of a talented group of local entertainers Naked Boys Singing has created a “splash”. Tracy rounds out his great shows with a more homespun atmosphere late nights in the piano bar where friends and neighbors gather regularly with pianist Dennis Crow to show off their talents at open mic. Everyone is a Caruso there! Nowhere can you have more fun than with Tracy and his wonderful group of entertainers! So, who is Tracy Parks? Well, drop by Incanto at Insurgentes #109 and see. (See incantovallarta.com for tickets and more information)

Bruce is a retired Canadian, who along with his wife Velma, took a “mulligan” on life and escaped the cold of Canada and settled in the Vallarta area. Fulfilling a retirement dream of not driving anymore, Bruce will use public transportation to tour the bay and tell his tales here. Tips and itineraries welcome.

here is a long and storied history with Captain Don’s Sports Bar, located in the Colonia of 5 de Diciembre at 126 Honduras, and I know none of it. My history with Captain Don’s began earlier this year, upon arrival in Vallarta when I stopped by to catch some afternoon music. We have seen “mucho” music there since, but I don’t remember who was playing that first time; what I remember is everyone having a great time, there was activity everywhere. One person kept popping up, taking videos, dancing, bringing the band tequila, and talking to everyone. We mentioned what a good time she was having. The following week, we were back to see the Gecko Band again (given enough time, I can remember things). The same lady was there again, and she seemed to be having even more fun than the previous week. It was our second week there, so apparently, that made us regulars and “family”. Berenice Martin del Campo, the owner of Captain Don’s came over and introduced herself to us with hugs. During follow-up visits, we have been impressed with the support the staff provides each other, in addition to the service for their visiting “family”. The bartenders, waiters, cooks, and owner, are all having fun, interacting with customers, and making them feel welcome. I don’t think I’ve ever been there without seeing Berenice

dancing. Unfortunately for my wife, you can’t say the same for me, “Lo siento.” Once, while waiting outside to catch an Uber home, Berenice came over and inquired if there was a problem, she could call a cab if required. We assured her we were fine and she was off talking to others. Our Uber arrived within minutes. Berenice served as a bartender at Captain Don’s for two years before becoming Don Olson’s partner for six years, taking over as sole owner earlier this year upon Don’s passing. Berenice describes the staff as family, as many have been there with her the whole time. Roberto, the chef, returned to the “family” recently and I for one have enjoyed his daily specials and menu items. On occasions, your beverage may be delayed in arriving as your server has been engaged as a dance partner, and it would be rude to just walk away. Captain Don’s is a supporter of local music, hosting afternoon music Tuesday and Thursday from 3 – 6 pm and evening music Friday and Saturday from 8 - 11 pm. It is not unusual to see aspiring bands getting a chance to play at Captain Don’s and the bar has hosted events where five newer/ younger bands have all performed. As is fitting for a Sports Bar, there are many TV’s available to view the latest sporting events (saves you from dancing) while watching live music; the best of both worlds! A pool-table, a book exchange, and a few slot machines round out the amenities. The bar also supports a team in a local pool league. I’m sure these aren’t the only events happening, stop by and check the place out, daytime or night time, there is always something happening. Berenice is always stepping up and offering Captain Don’s for fund raising events and collection centers for disaster relief efforts. One last item that may interest people, Captain Don’s has great prices on beer and buckets of beer and the staff does a chilling job of keeping the buckets filled with ice, when they are not delayed by dancing with “family”.