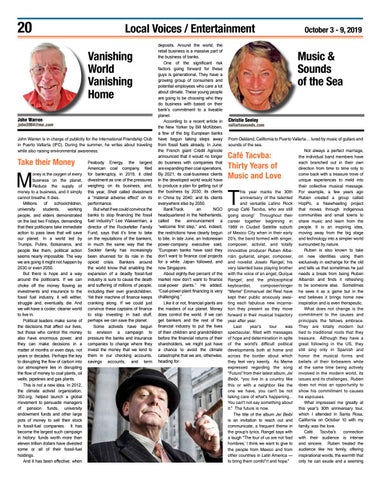 john3984@me.com John Warren is in charge of publicity for the International Friendship Club in Puerto Vallarta (IFC). During the summer, he writes about traveling while also raising environmental awareness.

oney is the oxygen of every business on the planet. Reduce the supply of money to a business, and it simply cannot breathe. It dies. Millions of schoolchildren, university students, working people, and elders demonstrated on the last two Fridays, demanding that their politicians take immediate action to pass laws that will save our planet. In a world led by Trumps, Putins, Bolsanaros, and people like them, political action seems nearly impossible. The way we are going it might not happen by 2030 or even 2050. But there is hope and a way around the politicians. If we can choke off the money flowing as investments and insurance to the fossil fuel industry, it will wither, struggle and, eventually, die. And we will have a cooler, cleaner world to live in. Political leaders make some of the decisions that affect our lives, but those who control the money also have enormous power, and they can make decisions in a matter of months or even days, not years or decades. Perhaps the key to disrupting the flow of carbon into our atmosphere lies in disrupting the flow of money to coal plants, oil wells, pipelines and gas plants. This is not a new idea. In 2012, the climate activist organization, 350.org, helped launch a global movement to persuade managers of pension funds, university endowment funds and other large pots of money to sell their stock in fossil-fuel companies. It has become the largest such campaign in history: funds worth more than eleven trillion dollars have divested some or all of their fossil-fuel holdings. And it has been effective: when

Peabody Energy, the largest American coal company, filed for bankruptcy, in 2016, it cited divestment as one of the pressures weighing on its business, and, this year, Shell called divestment a “material adverse effect” on its performance. But what if we could convince the banks to stop financing the fossil fuel industry? Lee Wasserman, a director of the Rockefeller Family Fund, says that it’s time to take on the reputations of the bankers, in much the same way that the Sackler family has increasingly been shunned for its role in the opioid crisis. Bankers around the world know that enabling the expansion of a deadly fossil-fuel industry is sure to cause the death and suffering of millions of people, including their own grandchildren. Yet their machine of finance keeps cranking along. If we could just convince these captains of finance to stop investing in bad stuff, perhaps we can save the planet. Some activists have begun to envision a campaign to pressure the banks and insurance companies to change where they invest the money that we lend to them in our checking accounts, savings accounts, and term

deposits. Around the world, the retail business is a massive part of the business of banks. One of the significant risk factors going forward for these guys is generational. They have a growing group of consumers and potential employees who care a lot about climate. These young people are going to be choosing who they do business with based on their bank’s commitment to a liveable planet. According to a recent article in the New Yorker by Bill McKibben, a few of the big European banks have begun taking steps away from fossil fuels already. In June, the French giant Crédit Agricole announced that it would no longer do business with companies that are expanding their coal operations. By 2021, its coal-business clients in the developed world would have to produce a plan for getting out of the business by 2030; its clients in China by 2040; and its clients everywhere else by 2050. BankTrack, an NGO headquartered in the Netherlands, called the announcement a “welcome first step,” and, indeed, the restrictions have clearly begun to bite. In late June, an Indonesian power-company executive said, “European banks have said they don’t want to finance coal projects for a while. Japan followed, and now Singapore. About eighty-five percent of the market now don’t want to finance coal-power plants.” He added, “Coal-power-plant financing is very challenging.” Like it or not, financial giants are the masters of our planet. Money does control the world. If we can get bankers and the rest of the financial industry to put the lives of their children and grandchildren before the financial returns of their shareholders, we might just have a chance to avoid the climate catastrophe that we are, otherwise, heading for.

vallartasounds.com From Oakland, California to Puerto Vallarta… lured by music of guitars and sounds of the sea. Not always a perfect marriage, the individual band members have each branched out in their own direction from time to time only to come back with a treasure trove of unique experiences to meld into their collective musical message. his year marks the 30th For example, a few years ago anniversary of the talented Ruben created a group called and versatile Latino Rock HopPo, a freewheeling project group Café Tacvba, who are still that moves through indigenous going strong!  Throughout their communities and small towns to career together beginning in share music and learn from the 1989 in Ciudad Satélite suburb people. It is an inspiring idea, of Mexico City when in their early moving away from the big stage 20’s, the band formed with singer, and technology into a simpler world composer, activist, and totally surrounded by nature.  Ruben is also known to take innovative producer Ruben Albarrán; guitarist, singer, composer, on new identities using them and novelist Joselo Rangel; his exclusively in exchange for the old very talented bass playing brother and tells us that sometimes he just with the voice of an angel, Quique needs a break from being Ruben Rangel; and the philosophical Albarrán and finds it refreshing keyboardist, composer/singer to be someone else.  Sometimes “Meme” Emmanuel del Real have he sees it as a game but in the kept their public anxiously awai- end believes it brings home new ting each fabulous new incarna- inspiration and is even therapeutic.  What does not change is the tion they present as they move forward in their musical trajectory commitment to the causes and principals the fellows embrace. year after year. Last year’s tour was They are totally modern but spectacular, filled with messages tied to traditional roots that they of hope and determination in spite treasure.  Although they have a of the world’s difficult political great following in the US, they developments both at home and still sing only in Spanish and across the border about which honor the musical forms and they feel very keenly.  As Meme beliefs of their forbearers while expressed regarding the song at the same time being actively “Futuro” from their latest album, Jei involved in the modern world, its Beibi, “you live in a country like issues and its challenges.  Ruben this or with a neighbor like the does not miss an opportunity to one we have, you can’t be not show his commitment to causes taking care of what’s happening... he espouses.    What impressed me greatly at You can’t not say something about this year’s 30th anniversary tour, it.”  The future is now.  The title of the album Jei Beibi which I attended in Santa Rosa, is an invitation to reach out and California on October 10 with my communicate, a frequent theme in family, was the love.  Café Tacvba’s connection the group’s lyrics. Rangel says with a laugh “The four of us are not ‘bad with their audience is intense hombres,’ I think we want to give to and sincere.  Ruben treated the the people from Mexico and from audience like his  family, offering other countries in Latin America — inspirational words, the warmth that only he can exude and a seeming to bring them comfo”rt and hope.”