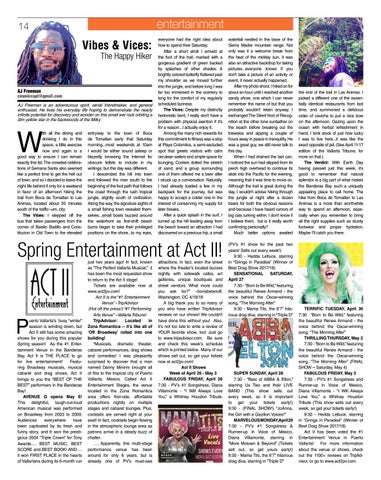 AJ Freeman is an adventurous spirit, serial friendmaker, and general enthusiast. He lives his everyday life hoping to demonstrate the nearly infinite potential for discovery and wonder on this small wet rock orbiting a dim yellow star in the backwoods of the Milky

ith all the dining and drinking I do in this space, a little exercise now and again is a good way to ensure I can remain exactly this fat. The crowded celebrations of Semana Santa also seemed like a perfect time to get the hell out of town, and so I decided to leave the night life behind if only for a weekend in favor of an afternoon hiking the trail from Boca de Tomatlan to Las Animas, located about 20 minutes south of the traffic--um, city. The Vibes: I stepped off the bus that takes passengers from the corner of Basilio Badillo and Constitucion in Old Town to the elevated

entryway to the town of Boca de Tomatlan early that Saturday morning...most weekends at 10am I would be either sound asleep or blazedly browsing the Internet for obscure tidbits to include in my writings, but this day was different. I descended the hill into town and followed the river south to the beginning of the foot path that follows the coast through the lush tropical jungle, slightly south of civilization. Along the way, the signature sights of a small fishing town revealed themselves...small boats buzzed around the waterfront as first-shift beach bums began to take their privileged positions on the shore...to my eyes,

everyone had the right idea about how to spend their Saturday. After a short stroll I arrived at the foot of the trail, marked with a gorgeous gradient of green backed by splashes of other shades. A brightly colored butterfly fluttered past my shoulder as we moved further into the jungle, and before long I was far too immersed in the scenery to long for the comfort of my regularly scheduled laziness. The Vices: Despite my distinctly hedonistic bent, I really don’t have a problem with physical exertion if it’s for a reason...I actually enjoy it. Among the many rich rewards for this commitment to fitness was a stop at Playa Colomitos, a semi-secluded spot that greets visitors with calm cerulean waters and ample space for lounging. Coolers dotted the stretch of sand, and a group surrounding one of them offered me a beer after I struck up a conversation. Naturally, I had already loaded a few in my backpack for the journey, but was happy to accept a colder one in the interest of conserving my supply for later breaks. After a quick splash in the surf, I turned up the hill leading away from the beach toward an attraction I had discovered on a previous trip, a small

uerto Vallarta’s busy “winter” season is winding down, but Act II still has some amazing shows for you during this popular Spring season!   As the #1 Entertainment Venue in the Banderas Bay, Act II is THE PLACE to go for live entertainment!   Featuring Broadway musicals, musical cabaret and drag shows, Act II brings to you the “BEST OF THE BEST” performers in the Banderas Bay! AVENUE Q opens May 6! This delightful, laugh-out-loud American musical was performed on Broadway from 2003 to 2009. Audiences everywhere have been captivated by its fresh and funny story, and It won the prestigious 2004 “Triple Crown” for Tony Awards…. BEST MUSIC, BEST SCORE and BEST BOOK! AND…. it won FIRST PLACE in the hearts of Vallartans during its 6-month run

just two years ago! In fact, known as “The Perfect Vallarta Musical,” it has been the most requested show to return to the Act II stage! Tickets are available now at www.act2pv.com! Act II is the “#1 Entertainment Venue” ~TripAdvisor (Hot off the press!) “#1 Performing Arts Venue” ~Vallarta Tribune! TripAdvisor: Located in Zona Romantica -- it’s like all of ‘Off Broadway’ rolled into one building! “Musicals, dramatic theater, cabaret performances, drag shows and comedies! I was pleasantly surprised to discover that a man named Danny Mininni brought all of this to the tropical city of Puerto Vallarta, Mexico. Called Act II Entertainment Stages, the venue located in the Zona Romantica   area offers first-rate, affordable productions nightly on multiple stages and cabaret lounges. Plus, cocktails are served right at your seat! In fact, cocktails begin flowing in the atmospheric lounge area as patrons arrive in a steady buzz of chatter. …. Apparently, this multi-stage performance venue has been around for only 6 years, but is already one of PV’s must-see

attractions. In fact, even the street where the theater’s located buzzes nightly with sidewalk cafes, art galleries, unique boutiques and street vendors. What more could you ask for?” ~borisbetanoff, Washington, DC 4/19/19 A big thank you to so many of you who have written TripAdvisor reviews on our shows! We couldn’t have done this without you! Also, it’s not too late to write a review of YOUR favorite show, too! Just go to www.tripadvisor.com.   Be sure and check this week’s schedule which is printed below.  Many of our shows sell out, so get your tickets now at act2pv.com!   Act II Shows Week of April 26 - May 3 FABULOUS FRIDAY, April 26 7:30 - PV’s #1 Songstress, Diana Villamonte - “I Will Always Love You,” a Whitney Houston Tribute.

waterfall nestled in the base of the Sierra Madre mountain range. Not only was it a welcome break from the heat of the midday sun, it was also an attractive backdrop for taking pictures...everyone knows if you don’t take a picture of an activity or event, it never actually happened. After my photo shoot, I hiked on for about an hour until I reached another sandy shore, one which I can never remember the name of but that you probably wouldn’t retain anyway. I exchanged The Silent Nod of Recognition at the other lone sunbather on the beach before breaking out the brewskis and sipping a couple of hours away in peace in tranquility. He was a great guy, we still never talk to this day. When I had drained the last can, I noticed the sun had slipped from its perch high overhead to continue its slide into the Pacific for the evening, meaning that it was time to move on. Although the trail is great during the day, I wouldn’t advise hiking through the jungle at night after a dozen beers for both the obvious reasons and because I have heard rumors of big cats lurking within. I don’t know if I believe them, but is it really worth confirming personally? Much better options awaited (PV’s #1 show for the past two years! Sells out every week!) 9:30 - Hedda Lettuce, starring in “Gringa in Paradise” (Winner of Best Drag Show 2017/18) SENSATIONAL SATURDAY, April 27 7:30 - “Born to Be Wild,” featuring the beautiful Renee Armand - the voice behind the Oscar-winning song, “The Morning After” 9:30 - Mama Tits, the 6’7” hilarious drag diva, starring in “Triple D”

the end of the trail in Las Animas. I picked a different one of the essentially identical restaurants from last time, and summoned a delicious order of ceviche to put a nice bow on the afternoon. Gazing upon the ocean with herbal refreshment in hand, I took stock of just how lucky I was to live here...it was like the exact opposite of jail. (See April 11-17 edition of the Vallarta Tribune, for more on that.) The Verdict: With Earth Day having passed just this week, it’s good to remember that natural splendor is a big part of what makes the Banderas Bay such a uniquely appealing place to call home. The hike from Boca de Tomatlan to Las Animas is a more than worthwhile way to spend an afternoon, especially when you remember to bring all the right supplies such as sturdy footwear and proper hydration. Maybe I’ll catch you there.