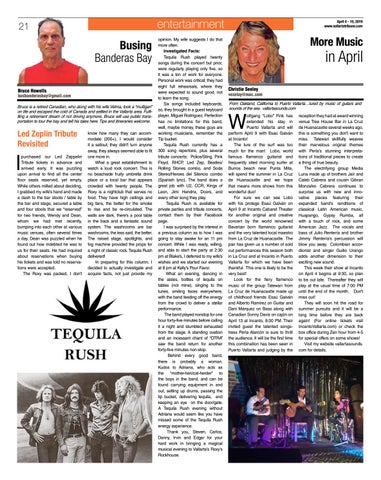 Bruce is a retired Canadian, who along with his wife Velma, took a “mulligan” on life and escaped the cold of Canada and settled in the Vallarta area. Fulfilling a retirement dream of not driving anymore, Bruce will use public transportation to tour the bay and tell his tales here. Tips and itineraries welcome.

purchased our Led Zeppelin Tribute tickets in advance and arrived early. It was puzzling upon arrival to find all the center floor seats reserved, yet empty. While others milled about deciding, I grabbed my wife’s hand and made a dash to the bar stools / table by the bar and stage, secured a table and four stools that we “reserved” for two friends, Wendy and Dean, whom we had met recently, bumping into each other at various music venues, often several times a day. Dean was puzzled when he found out how indebted he was to us for their seats. He had inquired about reservations when buying his tickets and was told no reservations were accepted. The Roxy was packed, I don’t

know how many they can accommodate (200+), I would consider it a sellout; they didn’t turn anyone away, they always seemed able to fit one more in. What a great establishment to watch a loud rock concert. This is no beachside fruity umbrella drink place or a local bar that appears crowded with twenty people. The Roxy is a nightclub that serves no food. They have high ceilings and big fans, the better for the smoke to rise and be re-circulated. The walls are dark, there’s a pool table in the back and a fantastic sound system. The washrooms are bar washrooms, the less said, the better. The raised stage, spotlights, and fog machine provided the props for a night of classic rock. Tequila Rush delivered! In preparing for this column, I decided to actually investigate and acquire facts, not just provide my

opinion. My wife suggests I do that more often. Investigated Facts: Tequila Rush played twenty songs during the concert but prior, were regularly playing only five, so it was a ton of work for everyone. Personal work was critical; they had eight full rehearsals, where they were expected to sound good, not to learn the song. Six songs included keyboards, so, they brought in a guest keyboard player, Miguel Rodriguez. Perfection has no limitations for this band, well, maybe money, these guys are working musicians, remember the Tip bucket. Tequila Rush currently has a 300 song repertoire, plus several tribute concerts; Police/Sting, Pink Floyd, RHCP, Led Zep, Beatles/ Rolling Stones combo, and Soda Stereo/Heroes del Silencio combo (Spanish lyric). The band does a great job with U2, CCR, Kings of Leon, Jimi Hendrix, Doors, and every other song they play. Tequila Rush is available for private parties and tribute concerts, contact them by their Facebook page. I was surprised by the interest in a previous column as to how I was going to stay awake for an 11 pm concert. While I was ready, willing, and able to start the party at 2:30 pm at Blake’s, I deferred to my wife’s wishes and we started our evening at 8 pm at Kelly’s Pour Favor. What an evening, dancing in the aisles, bottles of tequila on tables (not mine), singing to the tunes, smiling faces everywhere, with the band feeding off the energy from the crowd to deliver a stellar performance. The band played nonstop for one hour forty-five minutes before calling it a night and stumbled exhausted from the stage. A standing ovation and an incessant chant of “OTRA” saw the band return for another forty-five minutes non-stop. Behind every good band, there is probably a woman. Kudos to Adriana, who acts as the “mother-hen/cat-herder” to the boys in the band, and can be found carrying equipment in and out, setting up drums, passing the tip bucket, delivering tequila, and keeping an eye on the door/gate. A Tequila Rush evening without Adriana would seem like you have missed some of the Tequila Rush energy experience. Thank you, Steven, Carlos, Danny, Irvin and Edgar for your hard work in bringing a magical musical evening to Vallarta’s Roxy’s Rockhouse.

olfgang “Lobo” Fink has extended his stay in Puerto Vallarta and will perform April 9 with Esaú Galván at Incanto! The lure of the surf was too much for the man! Lobo, world famous flamenco guitarist and frequently sited morning surfer at Burros beach near Punta Mita, will spend the summer in La Cruz de Huanacaxtle and we hope that means more shows from this wonderful duo! For sure we can see Lobo with his protege Esaú Galván on April 9 at Incanto Cabaret Theater for another original and creative concert by the world renowned Bavarian born flamenco guitarist and the very talented local maestro from La Cruz de Huanacaxtle. The pair has given us a number of sold out performances this season both in La Cruz and at Incanto in Puerto Vallarta for which we have been thankful. This one is likely to be the very best! Look for the fiery flamenco music of the group Tatewari from La Cruz de Huanacaxtle made up of childhood friends Esaú Galván and Alberto Ramirez on Guitar and Dani Márquez on Bass along with Canadian Sonny Davis on cajón on April 13 at Incanto, 8:00 PM. Their invited guest the talented songstress Perla Alarcón is sure to thrill the audience. It will be the first time this combination has been seen in Puerto Vallarta and judging by the

reception they had at award winning venue Tree House Bar in La Cruz de Huanacaxtle several weeks ago, this is something you don’t want to miss. Tatewari skillfully weaves their marvelous original themes with Perla’s stunning interpretations of traditional pieces to create a thing of true beauty. The electrifying group Media Luna made up of brothers Jaír and Caleb Cabrera and cousin Gibran Monzalvo Cabrera continues to surprise us with new and innovative pieces featuring their expanded band’s renditions of classical Latin American music, Huapango, Gypsy Rumba, all with a touch of rock, and some American Jazz. The vocals and bass of Julio Rentería and brother Jimmy Rentería’s percussion will blow you away. Colombian accordionist and singer Guilio Urango adds another dimension to their exciting new sound. This week their show at Incanto on April 4 begins at 9:30, so plan to be out late. Thereafter they will play at the usual time of 7:00 PM until the end of the month. Don’t miss out! They will soon hit the road for summer pursuits and it will be a long time before they are back again! (For online tickets visit IncantoVallarta.com) or check the box office during Zen hour from 4-5 for special offers on some shows! Visit my website vallartasounds. com for details.