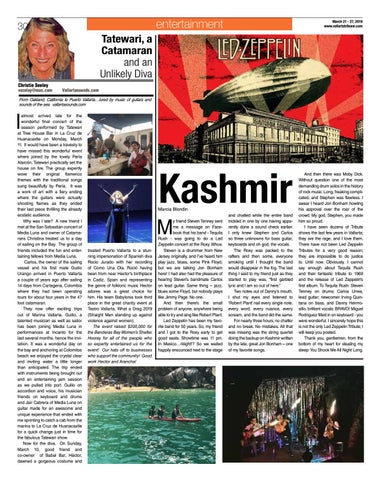 Tatewari, a Catamaran and an Unlikely Diva Christie Seeley

almost arrived late for the wonderful final concert of the season performed by Tatewari at Tree House Bar in La Cruz de Huanacaxtle on Monday, March 11. It would have been a travesty to have missed this wonderful event where joined by the lovely Perla Alarcón, Tatewari practically set the house on fire. The group expertly wove their original flamenco themes with the traditional songs sung beautifully by Perla. It was a work of art with a fiery ending where the guitars were actually shooting flames as they ended their last piece thrilling the already ecstatic audience. Why was I late? A new friend I met at the San Sebastián concert of Media Luna and owner of Catamarans Christina treated us to a day of sailing on the Bay. The group of friends included the fun and entertaining fellows from Media Luna. Carlos, the owner of the sailing vessel and his first mate Guilio Urango arrived in Puerto Vallarta a couple of years ago after sailing 14 days from Cartagena, Colombia where they had been operating tours for about four years in the 47 foot catamaran. They now offer exciting trips out of Marina Vallarta. Guilio, a talented musician as well as sailor has been joining Media Luna in performances at Incanto for the last several months, hence the invitation. It was a wonderful day on the bay and anchoring at Colomitos beach we enjoyed the crystal clear and inviting water a little longer than anticipated. The trip ended with instruments being brought out and an entertaining jam session as we pulled into port. Guilio on accordion and voice, his musician friends on keyboard and drums and Jaír Cabrera of Media Luna on guitar made for an awesome and unique experience that ended with me sprinting to catch a cab from the marina to La Cruz de Huanacaxtle for a quick change just in time for the fabulous Tatewari show. Now for the diva. On Sunday, March 10, good friend and co-owner of Babel Bar, Héctor, dawned a gorgeous costume and

M treated Puerto Vallarta to a stunning impersonation of Spanish diva Rocio Jurado with her recording of Como Una Ola. Roció having been from near Hector’s birthplace in Cadiz, Spain and representing the genre of folkloric music Hector adores was a great choice for him. His team Babylonia took third place in the great charity event at Teatro Vallarta, What a Drag 2019 (Straight Men standing up against violence against women). The event raised $200,000 for the Banderas Bay Women’s Shelter. Hooray for all of the people who so expertly entertained us for the event! Our hats off to businesses who support the community! Good work Hector and Arancha!

y friend Steven Tenney sent me a message on Facebook that his band - Tequila Rush - was going to do a Led Zeppelin concert at the Roxy. Whoa. Steven is a drummer from New Jersey originally, and I’ve heard him play jazz, blues, some Pink Floyd, but we are talking Jon Bonham here! I had also had the pleasure of hearing Steven’s bandmate Carlos on lead guitar. Same thing – jazz, blues some Floyd, but nobody plays like Jimmy Page. No one. And then there’s the small problem of anyone, anywhere being able to try and sing like Robert Plant. Led Zeppelin has been my favorite band for 50 years. So, my friend and I got to the Roxy early to get good seats. Showtime was 11 pm. In Mexico…riiiight!? So we waited happily ensconced next to the stage

and chatted while the entire band trickled in one by one having apparently done a sound check earlier. I only knew Stephen and Carlos so three unknowns for bass guitar, keyboards and oh god, the vocals. The Roxy was packed to the rafters and then some, everyone smoking until I thought the band would disappear in the fog. The last thing I said to my friend just as they started to play was, “first garbled lyric and I am so out of here.” Two notes out of Danny’s mouth, I shut my eyes and listened to ‘Robert Plant’ nail every single note, every word, every nuance, every scream, and the band did the same. For nearly three hours; no chatter and no break. No mistakes. All that was missing was the string quartet doing the backup on Kashmir written by the late, great Jon Bonham – one of my favorite songs.

And then there was Moby Dick. Without question one of the most demanding drum solos in the history of rock music. Long, freaking complicated, and Stephen was flawless. I swear I heard Jon Bonham howling his approval over the roar of the crowd. My god, Stephen, you made him so proud. I have seen dozens of Tribute shows the last few years in Vallarta; they are the rage, and I love them. There have not been Led Zeppelin Tributes for a very good reason; they are impossible to do justice to. Until now. Obviously, I cannot say enough about Tequila Rush and their fantastic tribute to 1969 and the release of Led Zeppelin’s first album. To Tequila Rush: Steven Tenney on drums; Carlos Urrea, lead guitar; newcomer Irving Quintana on bass, and Danny Hermosillo, brilliant vocals: BRAVO! Miguel Rodriguez filled in on keyboard - you were wonderful. I sincerely hope this is not the only Led Zeppelin Tribute; I will keep you posted. Thank you, gentlemen, from the bottom of my heart for stealing my sleep: You Shook Me All Night Long.