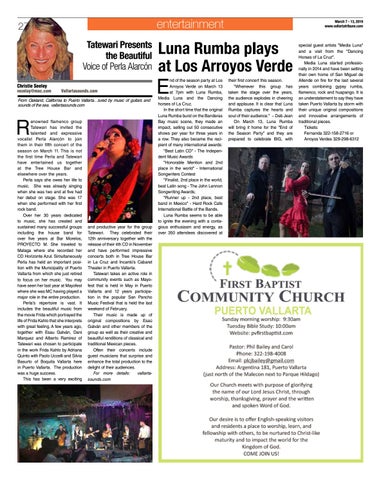 enowned flamenco group Tatewari has invited the talented and expressive vocalist Perla Alarcón to join them in their fifth concert of the season on March 11. This is not the first time Perla and Tatewari have entertained us together at the Tree House Bar and elsewhere over the years. Perla says she owes her life to music. She was already singing when she was two and at five had her debut on stage. She was 17 when she performed with her first rock band. Over her 30 years dedicated to music, she has created and sustained many successful groups including the house band for over five years at Bar Morelos, PROYECTO M. She traveled to Malaga where she recorded her CD Horizonte Azul. Simultaneously Perla has held an important position with the Municipality of Puerto Vallarta from which she just retired to focus on her music. You may have seen her last year at Mayofest where she was MC having played a major role in the entire production. Perla’s répertoire is vast. It includes the beautiful music from the movie Frida which portrayed the life of Frida Kahlo that she interprets with great feeling. A few years ago, together with Esau Galván, Dani Marquez and Alberto Ramirez of Tatewari was chosen to participate in the work Frida Kahlo by Adriana Quinto with Paolo Uccelli and Silvia Basurto of Boquita Vallarta here in Puerto Vallarta. The production was a huge success. This has been a very exciting

and productive year for the group Tatewari. They celebrated their 12th anniversary together with the release of their 4th CD in November and have performed impressive concerts both in Tree House Bar in La Cruz and Incanto’s Cabaret Theater in Puerto Vallarta. Tatewari takes an active role in community events such as Mayofest that is held in May in Puerto Vallarta and 12 years participation in the popular San Pancho Music Festival that is held the last weekend of February. Their music is made up of original compositions by Esaú Galván and other members of the group as well as their creative and beautiful renditions of classical and traditional Mexican pieces. Often their concerts include guest musicians that surprise and enhance the total production to the delight of their audiences. For more details: vallartasounds.com

nd of the season party at Los Arroyos Verde on March 13 at 7pm with Luna Rumba, Media Luna and the Dancing horses of La Cruz. In the short time that the original Luna Rumba burst on the Banderas Bay music scene, they made an impact, selling out 50 consecutive shows per year for three years in a row. They also became the recipient of many international awards: "Best Latin CD" - The Independent Music Awards "Honorable Mention and 2nd place in the world" - International Songwriters Contest "Finalist, 2nd place in the world, best Latin song - The John Lennon Songwriting Awards; "Runner up - 2nd place, best band in Mexico" - Hard Rock Cafe International Battle of the Bands. Luna Rumba seems to be able to ignite the evening with a contagious enthusiasm and energy, as over 350 attendees discovered at

their first concert this season. "Whenever this group has taken the stage over the years, the audience explodes in cheering and applause. It is clear that Luna Rumba captures the hearts and soul of their audience." ~ Deb Jean On March 13, Luna Rumba will bring it home for the "End of the Season Party" and they are prepared to celebrate BIG, with

special guest artists "Media Luna" and a visit from the "Dancing Horses of La Cruz". Media Luna started professionally in 2014 and have been setting their own home of San Miguel de Allende on fire for the last several years combining gypsy rumba, flamenco, rock and huapango. It is an understatement to say they have taken Puerto Vallarta by storm with their unique original compositions and innovative arrangements of traditional pieces. Tickets: Fernanda 322-158-2716 or Arroyos Verdes 329-298-6312