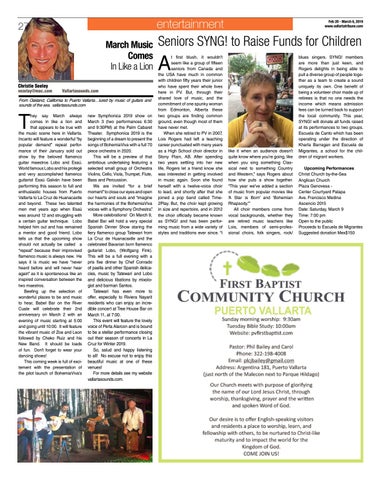 27 March Music Comes In Like a Lion Christie Seeley

hey say March always comes in like a lion and that appears to be true with the music scene here in Vallarta. Incanto will feature a wonderful “by popular demand” repeat performance of their January sold out show by the beloved flamenco guitar maestros Lobo and Esaú. World famous Lobo and his protegé and very accomplished flamenco guitarist Esaú Galván have been performing this season to full and enthusiastic houses from Puerto Vallarta to La Cruz de Huanacaxtle and beyond. These two talented men met years ago when Esaú was around 12 and struggling with a certain guitar technique. Lobo helped him out and has remained a mentor and good friend. Lobo tells us that the upcoming show should not actually be called a “repeat” because their improvised flamenco music is always new. He says it is music we have “never heard before and will never hear again” as it is spontaneous like an inspired conversation between the two maestros. Beefing up the selection of wonderful places to be and music to hear, Babel Bar on the River Cuale will celebrate their 2nd anniversary on March 2 with an evening of music starting at 5:00 and going until 10:00. It will feature the vibrant music of Zoe and Leon followed by Cheko Ruiz and his New Band. It should be loads of fun. Don’t forget to wear your dancing shoes! This coming week is full of excitement with the presentation of the pilot launch of BohemiaViva’s

new Symphonica 2019 show on March 3 (two performances 6:30 and 9:30PM) at the Palm Cabaret Theater. Symphonica 2019 is the beginning of a dream to present the songs of BohemiaViva with a full 70 piece orchestra in 2020. This will be a preview of that ambitious undertaking featuring a selected small group of Orchestra Violins, Cello, Viola, Trumpet, Flute, Bass and Percussion. We are invited “for a brief moment” to close our eyes and open our hearts and souls and “imagine the harmonies of the BohemiaViva voices with a Symphony Orchestra”. More celebrations! On March 9, Babel Bar will hold a very special Spanish Dinner Show staring the fiery flamenco group Tatewari from La Cruz de Huanacaxtle and the celebrated Bavarian born flamenco guitarist Lobo, (Wolfgang Fink). This will be a full evening with a pris fixe dinner by Chef Conrado of paella and other Spanish delicacies, music by Tatewari and Lobo and delicious libations by mixologist and barman Santos. Tatewari has even more to offer, especially to Riviera Nayarit residents who can enjoy an incredible concert at Tree House Bar on March 11, at 7:00. This event will feature the lovely voice of Perla Alarcon and is bound to be a stellar performance closing out their season of concerts in La Cruz for Winter 2019. So, salud and happy listening to all! No excuse not to enjoy this beautiful music at one of these venues! For more details see my website vallartasounds.com.

t first blush, it wouldn’t seem like a group of fifteen seniors from Canada and the USA have much in common with children fifty years their junior who have spent their whole lives here in PV. But, through their shared love of music, and the commitment of one spunky woman from Edmonton, Alberta these two groups are finding common ground, even though most of them have never met. When she retired to PV in 2007, Lois Rogers had left a teaching career punctuated with many years as a High School choir director in Stony Plain, AB. After spending two years settling into her new life, Rogers let a friend know she was interested in getting involved in music again. Soon she found herself with a twelve-voice choir to lead, and shortly after that she joined a pop band called Time2Play. But, the choir kept growing in size and repertoire, and in 2012 the choir officially became known as SYNG! and has been performing music from a wide variety of styles and traditions ever since. “I

like it when an audience doesn’t quite know where you’re going, like when you sing something Classical next to something Country and Western,” says Rogers about how she puts a show together. “This year we’ve added a section of music from popular movies like ‘A Star is Born’ and ‘Bohemian Rhapsody.’” All choir members come from vocal backgrounds, whether they are retired music teachers like Lois, members of semi-professional choirs, folk singers, rock/

blues singers. SYNG! members are more than just keen, and Rogers delights in being able to pull a diverse group of people together as a team to create a sound uniquely its own. One benefit of being a volunteer choir made up of retirees is that no one needs the income which means admission fees can be turned back to support the local community. This year, SYNG! will donate all funds raised at its performances to two groups. Escuela de Canto which has been operating under the direction of Kharla Barragan and Escuela de Migrantes, a school for the children of migrant workers. Upcoming Performances Christ Church by-the-Sea Anglican Church Plaza Genovesa Center Courtyard Palapa Ave. Francisco Medina Ascencio 2015 Date: Saturday, March 9 Time: 7:00 pm Open to the public Proceeds to Escuela de Migrantes Suggested donation Mex$150