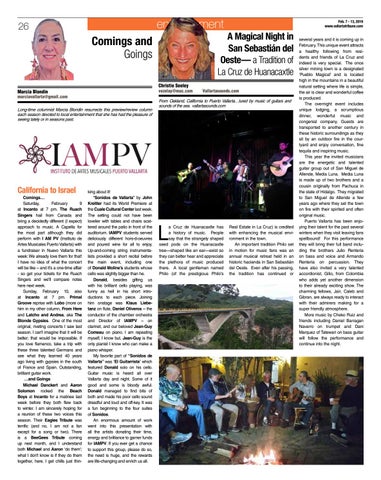 Long-time columnist Marcia Blondin resurrects this preview/review column each season devoted to local entertainment that she has had the pleasure of seeing lately or in seasons past.

California to Israel Comings… Saturday, February 9 at Incanto  at 7 pm. The  Ruach Singers  hail from Canada and bring a decidedly different (I expect) approach to music. A Capella for the most part although they did perform with  I AM PV  (Instituto de Artes Musicales Puerto Vallarta) with a fundraiser in Nuevo Vallarta this week: We already love them for that! I have no idea of what the concert will be like – and it’s a one-time affair - so get your tickets for the Ruach Singers and we’ll compare notes here next week. Sunday, February 10, also at  Incanto  at 7 pm.  Primal Groove reprise with Lobo (more on him in my other column, From Here and  Latcho and Andrea, aka  The Blonde Gypsies.  One of the most original, riveting concerts I saw last season. I can’t imagine that it will be better; that would be impossible. If you love flamenco, take a trip with these three talented Germans and see what they learned 40 years ago living with gypsies in the south of France and Spain. Outstanding, brilliant guitar work.  …and Goings Michael Danckert  and  Aaron Solomon  rocked the  Beach Boys  at  Incanto  for a matinee last week before they both flew back to winter. I am sincerely hoping for a reunion of these two voices this season. Their  Eagles Tribute  was terrific (and no, I am not a fan except for a song or two). There is a BeeGees Tribute  coming up next month, and I understand both Michael and Aaron ‘do them’; what I don’t know is if they do them together, here. I get chills just thin-

king about it! “Sonidos de Vallarta” by  John Kreitler  had its World Premiere at the Cuale Cultural Center last week. The setting could not have been lovelier with tables and chairs scattered around the patio in front of the auditorium. IAMPV  students served deliciously different hors-d›oeuvres and poured wine for all to enjoy. Up-and-coming string instrumentalists provided a short recital before the main event, including one of Donald Moline’s students whose cello was slightly bigger than he. Donald, besides gifting us with his brilliant cello playing, was funny as hell in his short introductions to each piece. Joining him onstage was  Klaus Liebetanz on flute, Daniel Oliveros – the conductor of the chamber orchestra and Director of  IAMPV  – on clarinet, and our beloved Jean-Guy Comeau  on piano. I am repeating myself, I know but, Jean-Guy is the only pianist I know who can make a piano whisper. My favorite part of “Sonidos de Vallarta” was ‘El Guitarrista’ which featured  Donald  solo on his cello. Guitar music is heard all over Vallarta day and night. Some of it good and some is bloody awful. Donald  managed to find bits of both and made his poor cello sound dreadful and loud and off-key. It was a fun beginning to the four suites of Sonidos. An enormous amount of work went into this presentation with all the artists donating their time, energy and brilliance to garner funds for IAMPV. If you ever get a chance to support this group, please do so, the need is huge, and the rewards are life-changing and enrich us all.

a Cruz de Huanacaxtle has a history of music. People say that the strangely shaped seed pods on the Huanacaxtle tree—shaped like an ear—exist so they can better hear and appreciate the plethora of music produced there. A local gentleman named Philo (of the prestigious Philo’s

Real Estate in La Cruz) is credited with enhancing the musical environment in the town. An important tradition Philo set in motion for music fans was an annual musical retreat held in an historic hacienda in San Sebastián del Oeste. Even after his passing, the tradition has continued or

several years and it is coming up in February. This unique event attracts a healthy following from residents and friends of La Cruz and indeed is very special. The once silver mining town is a designated ‘Pueblo Magical’ and is located high in the mountains in a beautiful natural setting where life is simple, the air is clear and wonderful coffee is produced. The overnight event includes unique lodging, a scrumptious dinner, wonderful music and congenial company. Guests are transported to another century in these historic surroundings as they sit by an outdoor fire in the courtyard and enjoy conversation, fine tequila and inspiring music. This year the invited musicians are the energetic and talented guitar group out of San Miguel de Allende, Media Luna. Media Luna is made up of two brothers and a cousin originally from Pachuca in the state of Hidalgo. They migrated to San Miguel de Allende a few years ago where they set the town on fire with their spirited and often original music. Puerto Vallarta has been enjoying their talent for the past several winters when they visit leaving fans spellbound! For this performance they will bring their full band including the brothers Julio Renteria on bass and voice and Armando Renteria on percussion. They have also invited a very talented accordionist, Gilio, from Colombia who adds yet another dimension to their already exciting show. The charming fellows, Jaír, Caleb and Gibran, are always ready to interact with their admirers making for a super friendly atmosphere. More music by Cheko Ruiz and friends including Daniel Barragan Navarro on trumpet and Dani Marquez of Tatewari on bass guitar will follow the performance and continue into the night.