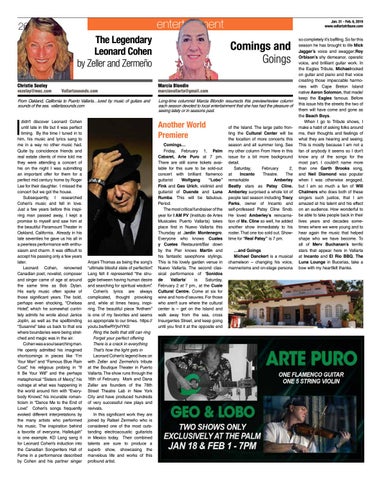 The Legendary Leonard Cohen by Zeller and Zermeño Christie Seeley

didn’t discover Leonard Cohen until late in life but it was perfect timing. By the time I tuned in to him, his music and lyrics sang to me in a way no other music had. Quite by coincidence friends and real estate clients of mine told me they were attending a concert of his on the night I was submitting an important offer for them for a perfect mid century home by Roger Lee for their daughter. I missed the concert but we got the house. Subsequently, I researched Cohen’s music and fell in love. Just a few years before this inspiring man passed away, I kept a promise to myself and saw him at the beautiful Paramount Theater in Oakland, California. Already in his late seventies he gave us his all in a peerless performance with enthusiasm and charm. It was difficult to accept his passing only a few years later. Leonard Cohen, renowned Canadian poet, novelist, composer and singer came of age at around the same time as Bob Dylan. His early music often spoke of those significant years. The bold, perhaps even shocking, “Chelsea Hotel”, which he somewhat contritely admits he wrote about Janice Joplin, as well as the spellbinding “Susanne” take us back to that era where boundaries were being stretched and magic was in the air. Cohen was a soul searching man. He openly admitted his imagined shortcomings in pieces like “I’m Your Man” and “Famous Blue Rain Coat”, his religious probing in “If It Be Your Will” and the perhaps metaphorical “Sisters of Mercy”, his outrage at what was happening in the world around him with “Everybody Knows”, his incurable romanticism in “Dance Me to the End of Love”. Cohen’s songs frequently evoked different interpretations by the many artists who performed his music. The inspiration behind a favorite of everyone, Hallelujah” is one example. KD Lang sang it for Leonard Cohen’s induction into the Canadian Songwriters Hall of Fame in a performance described by Cohen and his partner singer

Long-time columnist Marcia Blondin resurrects this preview/review column each season devoted to local entertainment that she has had the pleasure of seeing lately or in seasons past.

Anjani Thomas as being the song’s “ultimate blissful state of perfection”. Lang felt it represented “the struggle between having human desire and searching for spiritual wisdom”. Cohen’s lyrics are always complicated, thought provoking and, while at times heavy, inspiring. The beautiful piece “Anthem” is one of my favorites and seems so appropriate to our times. https:// youtu.be/6wRYjtvIYK0: Ring the bells that still can ring Forget your perfect offering There is a crack in everything That’s how the light gets in Leonard Cohen’s legend lives on with Zeller and Zermeño’s tribute at the Boutique Theater in Puerto Vallarta. The show runs through the 16th of February. Mark and Dana Zeller are founders of the 78th Street Theatre Lab in New York City and have produced hundreds of very successful new plays and revivals. In this significant work they are joined by Rafael Zermeño who is considered one of the most outstanding electroacoustic guitarists in Mexico today. Their combined talents are sure to produce a superb show, showcasing the marvelous life and works of this profound artist.

Comings… Friday, February 1, Palm Cabaret, Arte Puro  at 7 pm. There are still some tickets available for this sure to be sold-out concert with brilliant flamenco guitarist  Wolfgang “Lobo” Fink  and  Geo Urich, violinist and guitarist of  Duende  and  Luna Rumba. This will be fabulous. Period. The most critical fundraiser of the year for I AM PV (Instituto de Artes Musicales Puerto Vallarta) takes place first in Nuevo Vallarta this Thursday at  Jardin Montenegro. Everyone who knows  Cuates y Cuetes  Restaurant/Bar down by the Pier knows  Martin  and his fantastic saxophone stylings. This is his lovely garden venue in Nuevo Vallarta. The second classical performance of  ‘Sonidos de Vallarta’  is Saturday, February 2 at 7 pm., at the Cuale Cultural  Centre. Come at six for wine and hors-d’oeuvres. For those who aren’t sure where the  cultural center  is – get on the Island and walk away from the sea, cross Insurgentes Street, and keep going until you find it at the opposite end

of the Island. The large patio fronting the Cultural Center  will be the location of more concerts this season and all summer long. See my other column From Here in this issue for a bit more background detail.  Saturday, February 2, at  Incanto  Theatre. The remarkable  Amberley Beatty  stars as  Patsy Cline. Amberley surprised a whole lot of people last season including Tracy Parks, owner of  Incanto  and self-professed  Patsy Cline  Snob. He loved  Amberley’s  reincarnation of Ms. Cline so well, he added another show immediately to his roster. That one too sold out. Showtime for “Real Patsy” is 7 pm.   …and Goings Michael Danckert  is a musical chameleon – changing his voice, mannerisms and on-stage persona

so completely it’s baffling. So far this season he has brought to life Mick Jagger’s  voice and swagger;Roy Orbison’s shy demeanor, operatic voice, and brilliant guitar work. In the Eagles Tribute,  Michaelrocked on guitar and piano and that voice creating those impeccable harmonies with Cape Breton Island native Aaron Solomon, that made/ keep the  Eagles  famous. Before this issue hits the streets the two of them will have come and gone as the Beach Boys. When I go to Tribute shows, I make a habit of asking folks around me, their thoughts and feelings of what they are hearing and seeing. This is mostly because I am not a fan of anybody it seems so I don’t know any of the songs for the most part. I couldn’t name more than one  Garth Brooks  song, and  Neil Diamond  was popular when I was otherwise engaged, but I am so much a fan of  Will Chalmers who does both of these singers such justice, that I am amazed at his talent and his effect on an audience. How wonderful to be able to take people back in their lives years and decades sometimes where we were young and to hear again the music that helped shape who we have become. To all of  Merv Buchanan’s  terrific stars that appear here in Vallarta at  Incanto  and  El Rio BBQ,  The Luna Lounge  in Bucerias, take a bow with my heartfelt thanks.