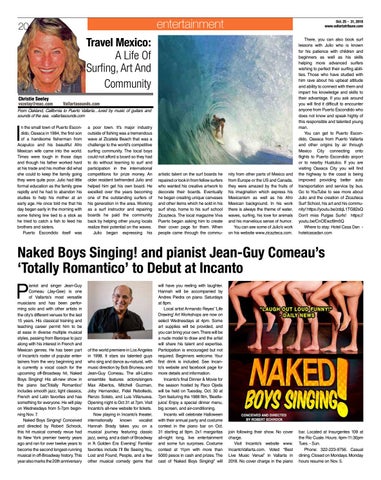 n the small town of Puerto Escondido, Oaxaca in 1984, the first son of a handsome fisherman from Acapulco and his beautiful Afro Mexican wife came into the world. Times were tough in those days and though his father worked hard at his trade and his mother did what she could to keep the family going they were quite poor. Julio had little formal education as the family grew rapidly and he had to abandon his studies to help his mother at an early age. He once told me that his day began early in the morning with some fishing line tied to a stick as he tried to catch a fish to feed his brothers and sisters. Puerto Escondido itself was

a poor town. It’s major industry outside of fishing was a tremendous wave at Zicatela Beach that was a challenge to the world’s competitive surfing community. The local boys could not afford a board so they had to do without learning to surf and participation in the international competitions for prize money. An older resident befriended Julio and helped him get his own board. He excelled over the years becoming one of the outstanding surfers of his generation in the area. Working as a surf instructor and repairing boards he paid the community back by helping other young locals realize their potential on the waves. Julio began expressing his

artistic talent on the surf boards he repaired or took in from fellow surfers who wanted his creative artwork to decorate their boards. Eventually he began creating unique canvases and other items which he sold in his surf shop, home to his surf school Zicazteca. The local magazine Viva Puerto began asking him to create their cover page for them. When people came through the commu-

nity from other parts of Mexico and from Europe or the US and Canada, they were amazed by the fruits of his imagination which express his Mexicanism as well as his Afro Mexican background. In his work there is always the theme of water, waves, surfing, his love for animals and his marvelous sense of humor. You can see some of Julio’s work on his website www.zicazteca.com.

There, you can also book surf lessons with Julio who is known for his patience with children and beginners as well as his skills helping more advanced surfers wishing to perfect their surfing abilities. Those who have studied with him rave about his upbeat attitude and ability to connect with them and impart his knowledge and skills to their advantage. If you ask around you will find it difficult to encounter anyone from Puerto Escondido who does not know and speak highly of this responsible and talented young man. You can get to Puerto Escondido, Oaxaca from Puerto Vallarta and other origins by air through Mexico City connecting onto flights to Puerto Escondido airport or to nearby Huatulco. If you are visiting Oaxaca City you will find the highway to the coast is being improved providing better auto transportation and service by bus. Go to YouTube to see more about Julio and the creation of Zicazteca Surf School, his art and his community! https://youtu.be/zdqL1TG82sQ Don’t miss Pulgas Surfs!    https:// youtu.be/CnOEwzl9m5Q Where to stay: Hotel Casa Dan hotelcasadan.com

ianist and singer Jean-Guy Comeau (Jay-Gee) is one of Vallarta’s most versatile musicians and has been performing solo and with other artists in the city’s different venues for the last 15 years. His classical training and teaching career permit him to be at ease in diverse multiple musical styles, passing from Baroque to jazz along with his interest in French and Mexican genres. He has been part of Incanto’s roster of popular entertainers from the very beginning and is currently a vocal coach for the upcoming off-Broadway hit, Naked Boys Singing! His all-new show in the piano bar,‘Totally Romantico’ includes smooth jazz, light classics, French and Latin favorites and has something for everyone. He will play on Wednesdays from 5-7pm beginning Nov. 7. Naked Boys Singing! Conceived and directed by Robert Schrock, this hit musical comedy revue had its New York premier twenty years ago and ran for over twelve years to become the second longest-running musical in off-Broadway history. This year also marks the 20th anniversary

of the world premiere in Los Angeles in 1998. It stars six talented guys who sing and dance au-natural, with music direction by Bob Bruneau and Jean-Guy Comeau. The all-Latino ensemble features actors/singers Max Albertos, Mitchell Guzman, Joby Hernandez, Fidel Rebolledo, Renzo Sotelo, and Luis Villanueva. Opening night is Oct 31 at 7pm. Visit Incanto’s all-new website for tickets. Now playing in Incanto’s theater, internationally known vocalist Hannah Brady takes you on a musical journey featuring classic jazz, swing, and a dash of Broadway in ‘A Golden Era Evening’. Familiar favorites include I’ll Be Seeing You, Lost and Found, People, and a few other musical comedy gems that

will have you reeling with laughter. Hannah will be accompanied by Andres Piedra on piano. Saturdays at 8pm. Local artist Armando Reyes’ ‘Life Drawing’ Art Workshops are now on select Wednesdays at 4pm. Some art supplies will be provided, and you can bring your own. There will be a nude model to draw and the artist will share his talent and expertise. Participation is encouraged but not required. Beginners welcome. Your first drink is included. See Incanto’s website and facebook page for more details and information. Incanto’s final Dinner & Movie for the season hosted by Paco Ojeda will be held on Tuesday, Oct. 30 at 7pm featuring the 1988 film, ‘Beetlejuice’. Enjoy a special dinner menu, big screen, and air-conditioning. Incanto will celebrate Halloween with their annual party and costume contest in the piano bar on Oct. 31 starting at 9pm. 2x1 margaritas all-night long, live entertainment and some fun surprises. Costume contest at 11pm with more than 5000 pesos in cash and prizes. The cast of ‘Naked Boys Singing!’ will