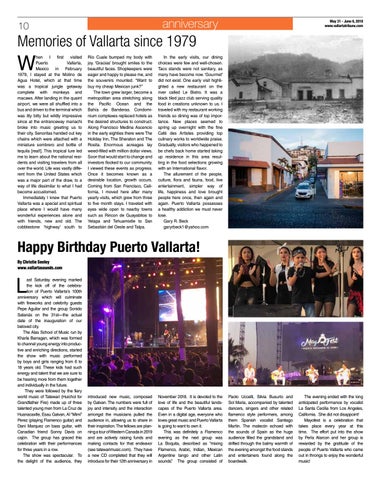 Memories of Vallarta since 1979

hen I first visited Puerto Vallarta, Mexico in February 1979, I stayed at the Molino de Agua Hotel, which at that time was a tropical jungle getaway complete  with  monkeys  and macaws. After landing in the quaint airport, we were all shuffled into a bus and driven to the terminal which was itty bitty but wildly impressive since at the entranceway mariachi broke into music greeting us to their city. Senoritas handed out key chains which were attached with a miniature sombrero and bottle of tequila [real!]. This tropical lure led me to learn about the national residents and visiting travelers from all over the world. Life was vastly different from the United States which was a major part of the draw, to a way of life dissimilar to what I had become accustomed. Immediately I knew that Puerto Vallarta was a special and spiritual place  where I would have many wonderful experiences alone and with friends, new and old. The cobblestone  ‘highway’ south to

Río Cuale bumped my body with joy. ‘Gracias’ brought smiles to the beautiful faces. Shopkeepers were eager and happy to please me, and the souvenirs mounted. “Want to buy my cheap Mexican junk?” The town grew larger, become a metropolitan area stretching  along the Pacific Ocean and the Bahía de Banderas. Condominium complexes replaced hotels as the desired structures to construct. Along Francisco Medina Ascencio in the early eighties there were The Holiday Inn, The Sheraton and The Rosita. Enormous acreages lay weed-filled with million dollar views. Soon that would start to change and investors flocked to our community. I viewed these events as progress. Once it becomes known as a desirable location, growth occurs.  Coming from San Francisco, California, I  moved  here after many yearly visits, which grew from three to five month stays. I traveled with eyes wide open to nearby towns such as  Rincon de Guayabitos to Yelapa and Tehuamixtle to San Sebastián del Oeste and Talpa.

In the early visits, our dining choices were few and well-chosen. Taco stands were not sanitary, as many have become now. ‘Gourmet’ did not exist. One early visit highlighted a new restaurant on the river called Le Bistro. It was a black tiled jazz club serving quality food in creations unknown to us. I traveled with my restaurant working friends so dining was of top importance. New places seemed to spring up overnight with the fine Café des Artistes providing  top culinary works to worldwide praise. Gradually, visitors who happened to be chefs back home started taking up residence in this area resulting in the food selections growing with an International flavor.  The allurement of the people, culture, flora and fauna, food, live entertainment, simpler way of life, happiness and love brought people here once, then again and again. Puerto Vallarta possesses a healthy addiction we must never lose. Gary R. Beck  garyrbeck1@yahoo.com

ast Saturday evening marked the kick off of the celebration of Puerto Vallarta’s 100th anniversary which will culminate with fireworks and celebrity guests Pepe Aguilar and the group Sonido Satanás on the 31st—the actual date of the inauguration of our beloved city. The Alas School of Music run by Kharla Barragan, which was formed to channel young energy into productive and enriching directions, started the show with music performed by boys and girls ranging from 6 to 18 years old. These kids had such energy and talent that we are sure to be hearing more from them together and individually in the future.     They were followed by the fiery world music of Tatewari (Huichol for Grandfather Fire) made up of three talented young men from La Cruz de Huanacaxtle, Esau Galvan, Al “Mimi” Perez (playing Flamenco guitar) and Dani Marquez on bass guitar, with Canadian friend Sonny Davis on cajón.  The group has graced this celebration with their performances for three years in a row.   The show was spectacular.  To the delight of the audience, they

introduced new music, composed by Galvan. The numbers were full of joy and intensity and the interaction amongst the musicians pulled the audience in, allowing us to share in their inspiration. The fellows are planning a tour of Western Canada in 2019 and are actively raising funds and making contacts for that endeavor (see tatewarimusic.com).  They have a new CD completed that they will introduce for their 12th anniversary in

November 2018.  It is devoted to the love of life and the beautiful landscapes of the Puerto Vallarta area.  Even in a digital age, everyone who loves great music and Puerto Vallarta is going to want to own it. This was definitely a Flamenco evening as the next group was La Boquita, described as “mixing Flamenco, Arabic, Indian, Mexican Argentine tango and other Latin sounds”.    The group consisted of

Paolo Uccelli, Silvia Busurto and Sol Maria, accompanied by talented dancers, singers and other related flamenco style performers, among them Spanish vocalist Santiago Martin. The malecón echoed with the sounds of Spain as the huge audience filled the grandstand and drifted through the balmy warmth of the evening amongst the food stands and entertainers found along the boardwalk.

The evening ended with the long anticipated performance by vocalist La Santa Cecilia from Los Angeles, California.  She did not disappoint! Mayofest is a celebration that takes place every year at this time.    The effort put into the show by Perla Alarcon and her group is rewarded by the gratitude of the people of Puerto Vallarta who came out in throngs to enjoy the wonderful music!