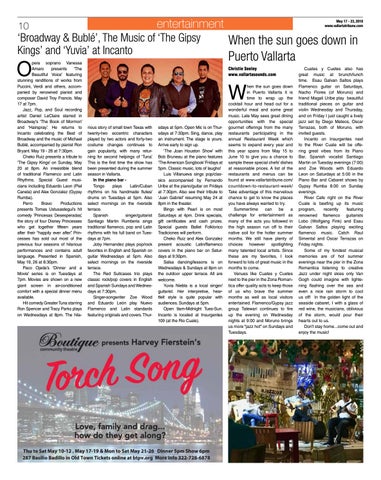 entertainment ‘Broadway & Bublé’, The Music of ‘The Gipsy When the sun goes down in Kings’ and ‘Yuvia’ at Incanto

pera soprano Vanessa Amaro presents ‘The Beautiful Voice’ featuring stunning renditions of works from Puccini, Verdi and others, accompanied by renowned pianist and composer David Troy Francis. May 17 at 7pm. Jazz, Pop, and Soul recording artist Daniel LeClaire starred in Broadway’s ‘The Book of Mormon’ and ‘Hairspray’. He returns to Incanto celebrating the Best of Broadway and the music of Michael Bublé, accompanied by pianist Ron Bryant. May 19 - 26 at 7:30pm. Cheko Ruiz presents a tribute to ‘The Gipsy Kings’ on Sunday, May 20 at 8pm. An irresistible blend of traditional Flamenco and Latin Rhythms. Special Guest musicians including Eduardo Leon (Piel Canela) and Alex Gonzalez (Gypsy Rumba). Perro Bravo Productions presents Tomas Ustusastegui’s hit comedy ‘Princesas Desesperadas’, the story of four Disney Princesses who get together fifteen years after their “happily ever after”. Princesses has sold out most of the previous four seasons of hilarious performances and contains adult language. Presented in Spanish, May 19, 26 at 8:30pm. Paco Ojeda’s ‘Dinner and a Movie’ series is on Tuesdays at 7pm. Movies are shown on a new giant screen in air-conditioned comfort with a special dinner menu available. Hit comedy Greater Tuna starring Ron Spencer and Tracy Parks plays on Wednesdays at 8pm. The hila-

W rious story of small town Texas with twenty-two eccentric characters played by two actors and forty-two costume changes continues to gain popularity, with many returning for second helpings of ‘Tuna’. This is the first time the show has been presented during the summer season in Vallarta. In the piano bar Tongo plays Latin/Cuban rhythms on his handmade flutes/ drums on Tuesdays at 5pm. Also select mornings on the riverside terrace. Spanish singer/guitarist Santiago Martin Rumberia sings traditional flamenco, pop and Latin rhythms with his full band on Tuesdays at 7pm. Joby Hernandez plays pop/rock favorites in English and Spanish on guitar Wednesdays at 5pm. Also select mornings on the riverside terrace. The Red Suitcases trio plays classic rock/pop covers in English and Spanish Sundays and Wednesdays at 7:30pm. Singer-songwriter Zoe Wood and Eduardo León play Nuevo Flamenco and Latin standards featuring originals and covers. Thur-

sdays at 5pm. Open Mic is on Thursdays at 7:30pm. Sing, dance, play an instrument. The stage is yours. Arrive early to sign up. ‘The Joan Houston Show’ with Bob Bruneau at the piano features ‘The American Songbook’ Fridays at 5pm. Classic music, lots of laughs! Luis Villanueva sings pop/classics accompanied by Fernando Uribe at the piano/guitar on Fridays at 7:30pm. Also see their tribute to ‘Juan Gabriel’ resuming May 24 at 8pm in the theater. Bingo with Pearl is on most Saturdays at 4pm. Drink specials, gift certificates and cash prizes. Special guests Ballet Folklorico Tradiciones will perform. Cheko Ruiz and Alex Gonzalez present acoustic Latin/flamenco covers in the piano bar on Saturdays at 9:30pm. Salsa dancing/lessons is on Wednesdays & Sundays at 8pm on the outdoor upper terrace. All are welcome. Yuvia Niebla is a local singer/ guitarist. Her interpretive, heartfelt style is quite popular with audiences. Sundays at 5pm. Open 9am-Midnight Tues-Sun. Incanto is located at Insurgentes 109 (at the Rio Cuale).

hen the sun goes down in Puerto Vallarta it is time to wrap up the cocktail hour and head out for a wonderful meal and some great music. Late May sees great dining opportunities with the special gourmet offerings from the many restaurants participating in the annual Restaurant Week which seems to expand every year and this year spans from May 15 to June 10 to give you a chance to sample these special chefs’ dishes at reasonable prices. A list of the restaurants and menus can be found at www.vallartatribune.com/ countdown-to-restaurant-week/ Take advantage of this marvelous chance to get to know the places you have always wanted to try. Summertime can be a challenge for entertainment as many of the acts you followed in the high season run off to their native soil for the hotter summer months. We still have plenty of choices however spotlighting many talented local artists. Since these are my favorites, I look forward to lots of great music in the months to come. Venues like Cuates y Cuetes next to the pier in the Zona Romantica offer quality acts to keep those of us who brave the summer months as well as local visitors entertained. Flamenco/Gypsy jazz group Tatewari continues to fire up the evening on Wednesday nights at 9:00 and Moruno brings us more “jazz hot” on Sundays and Tuesdays.

Cuates y Cuetes also has great music at brunch/lunch time. Esau Galvan Saltos plays Flamenco guitar on Saturdays, Nacho Flores (of Moruno) and friend Magali Uribe play  beautiful traditional pieces on guitar and violin Wednesday and Thursday, and on Friday I just caught a lively jazz set by Diego Mateos, Oscar Terrazas, both of Moruno, with invited guests. Incanto on Insurgentes next to the River Cuale will be offering great vibes from its Piano Bar,  Spanish vocalist Santiago Martin on Tuesday evenings (7:00) and Zoe Woods with Eduardo Leon on Saturdays at 5:00 in the Piano Bar  and Cabaret shows by Gypsy Rumba 8:00 on Sunday evenings. River Cafe right on the River Cuale is beefing up its music program, recently featuring renowned flamenco guitarists Lobo (Wolfgang Fink) and Esau Galvan Saltos playing exciting flamenco music. Catch Raul Simental and Oscar Terrazas on Friday nights. Some of my fondest musical memories are of hot summer evenings near the pier in the Zona Romantica listening to creative Jazz under night skies only Van Gogh could imagine with lightening flashing over the sea and even a nice rain storm to cool us off!  In the golden light of the seaside cabaret, I with a glass of red wine, the musicians, oblivious of the storm, would pour their hearts out to us. Don’t stay home...come out and enjoy the music!