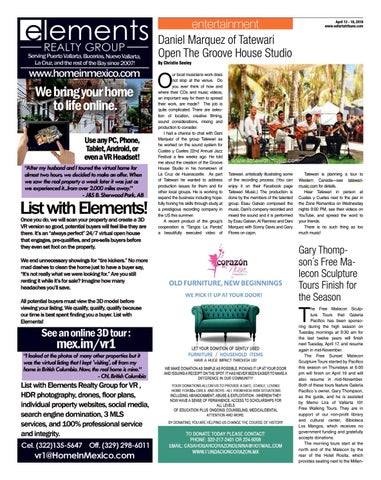 ur local musicians work does not stop at the venue. Do you ever think of how and where their CDs and music videos, an important way for them to spread their work, are made?  The job is quite complicated. There are selection of location, creative filming, sound considerations, mixing and production to consider.   I had a chance to chat with Dani Marquez of the group Tatewari as he worked on the sound system for Cuates y Cuetes 22nd Annual Jazz Festival a few weeks ago. He told me about the creation of the Groove House Studio in his hometown of La Cruz de Huanacaxtle.  As part of Tatewari he wanted to address production issues for them and for other local groups. He is working to expand the business including hopefully honing his skills through study at a prestigious recording company in the US this summer. A recent product of the group’s cooperation is “Tangos La Parota”, a beautifully executed video of

Tatewari, artistically illustrating some of the recording process. (You can enjoy it on their Facebook page Tatewari Music.) The production is done by the members of the talented group. Esau Galvan composed the music, Dani’s company recorded and mixed the sound and it is performed by Esau Galvan, Al Ramirez and Dani Marquez with Sonny Davis and Gary Flores on cajon.

Tatewari is planning a tour to Western Canada—see tatewarimusic.com for details. Hear Tatewari in person at Cuates y Cuetes next to the pier in the Zone Romantica on Wednesday nights 9:00 PM, see their videos on YouTube, and spread the word to your friends.  There is no such thing as too much music!

he Free Malecon Sculpture Tours that Galeria Pacifico has been sponsoring during the high season on Tuesday mornings at 9:30 am for the last twelve years will finish next Tuesday, April 17, and resume again in mid-November. The Free Sunset Malecon Sculpture Tours started by Pacifico this season on Thursdays at 6:00 pm will finish on April 19 and will also resume in mid-November. Both of these tours feature Galeria Pacifico´s owner, Gary Thompson, as the guide, and he is assisted by Memo Lira of Vallarta 101 Free Walking Tours. They are in support of our non-profit library and cultural center, Bibioteca Los Mangos, which receives no government funding and gratefully accepts donations. The morning tours start at the north end of the Malecon by the rear of the Hotel Rosita, which provides seating next to the Millen-