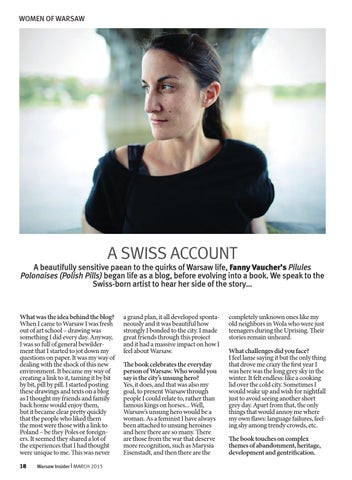 A beautifully sensitive paean to the quirks of Warsaw life, Fanny Vaucher’s Pilules Polonaises (Polish Pills) began life as a blog, before evolving into a book. We speak to the Swiss-born artist to hear her side of the story…

What was the idea behind the blog? When I came to Warsaw I was fresh out of art school – drawing was something I did every day. Anyway, I was so full of general bewilderment that I started to jot down my questions on paper. It was my way of dealing with the shock of this new environment. It became my way of creating a link to it, taming it by bit by bit, pill by pill. I started posting these drawings and texts on a blog as I thought my friends and family back home would enjoy them, but it became clear pretty quickly that the people who liked them the most were those with a link to Poland – be they Poles or foreigners. It seemed they shared a lot of the experiences that I had thought were unique to me. This was never

a grand plan, it all developed spontaneously and it was beautiful how strongly I bonded to the city. I made great friends through this project and it had a massive impact on how I feel about Warsaw. The book celebrates the everyday person of Warsaw. Who would you say is the city’s unsung hero? Yes, it does, and that was also my goal, to present Warsaw through people I could relate to, rather than famous kings on horses... Well, Warsaw’s unsung hero would be a woman. As a feminist I have always been attached to unsung heroines and here there are so many. There are those from the war that deserve more recognition, such as Marysia Eisenstadt, and then there are the

completely unknown ones like my old neighbors in Wola who were just teenagers during the Uprising. Their stories remain unheard. What challenges did you face? I feel lame saying it but the only thing that drove me crazy the first year I was here was the long grey sky in the winter. It felt endless: like a cooking lid over the cold city. Sometimes I would wake up and wish for nightfall just to avoid seeing another short grey day. Apart from that, the only things that would annoy me where my own flaws: language failures, feeling shy among trendy crowds, etc. The book touches on complex themes of abandonment, heritage, development and gentrification.

Mermaids and ladies have their day in the sunshine.