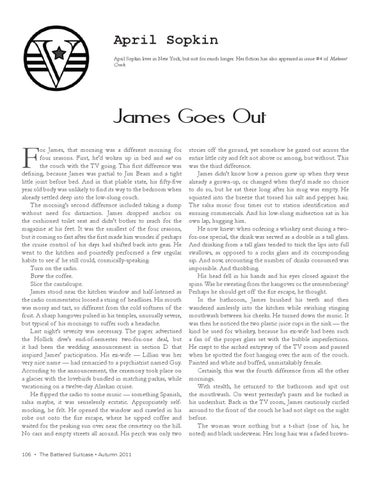 April Sopkin April Sopkin lives in New York, but not for much longer. Her fiction has also appeared in issue #4 of Makeout Creek.

or James, that morning was a different morning for four reasons. First, he’d woken up in bed and not on the couch with the TV going. This first difference was defining, because James was partial to Jim Beam and a tight little joint before bed. And in that pliable state, his fifty-five year old body was unlikely to find its way to the bedroom when already settled deep into the low-slung couch. The morning’s second difference included taking a dump without need for distraction. James dropped anchor on the cushioned toilet seat and didn’t bother to reach for the magazine at his feet. It was the smallest of the four reasons, but it coming so fast after the first made him wonder if perhaps the cruise control of his days had shifted back into gear. He went to the kitchen and pointedly performed a few regular habits to see if he still could, cosmically-speaking. Turn on the radio. Brew the coffee. Slice the cantaloupe. James stood near the kitchen window and half-listened as the radio commentator loosed a string of headlines. His mouth was mossy and tart, so different from the cold softness of the fruit. A sharp hangover pulsed in his temples, unusually severe, but typical of his mornings to suffer such a headache. Last night’s severity was necessary. The paper advertised the Hollick dive’s end-of-semester two-for-one deal, but it had been the wedding announcement in section D that inspired James’ participation. His ex-wife — Lillian was her very nice name — had remarried to a psychiatrist named Guy. According to the announcement, the ceremony took place on a glacier with the lovebirds bundled in matching parkas, while vacationing on a twelve-day Alaskan cruise. He flipped the radio to some music — something Spanish, salsa maybe, it was senselessly ecstatic. Appropriately selfmocking, he felt. He opened the window and crawled in his robe out onto the fire escape, where he sipped coffee and waited for the peaking sun over near the cemetery on the hill. No cars and empty streets all around. His perch was only two 106 ▪ The Battered Suitcase ▪ Autumn 2011

stories off the ground, yet somehow he gazed out across the entire little city and felt not above or among, but without. This was the third difference. James didn’t know how a person grew up when they were already a grown-up, or changed when they’d made no choice to do so, but he sat there long after his mug was empty. He squinted into the breeze that tossed his salt and pepper hair. The salsa music four times cut to station identification and ensuing commercials. And his low-slung midsection sat in his own lap, hugging him. He now knew: when ordering a whiskey neat during a twofor-one special, the drink was served as a double in a tall glass. And drinking from a tall glass tended to trick the lips into full swallows, as opposed to a rocks glass and its corresponding sip. And now, recounting the number of drinks consumed was impossible. And throbbing. His head fell in his hands and his eyes closed against the spins. Was he sweating from the hangover or the remembering? Perhaps he should get off the fire escape, he thought. In the bathroom, James brushed his teeth and then wandered aimlessly into the kitchen while swishing stinging mouthwash between his cheeks. He turned down the music. It was then he noticed the two plastic juice cups in the sink — the kind he used for whiskey, because his ex-wife had been such a fan of the proper glass set with the bubble imperfections. He crept to the arched entryway of the TV room and paused when he spotted the foot hanging over the arm of the couch. Painted and white and buffed, unmistakably female. Certainly, this was the fourth difference from all the other mornings. With stealth, he returned to the bathroom and spit out the mouthwash. On went yesterday’s pants and he tucked in his undershirt. Back in the TV room, James cautiously circled around to the front of the couch he had not slept on the night before. The woman wore nothing but a t-shirt (one of his, he noted) and black underwear. Her long hair was a faded brown- 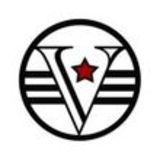